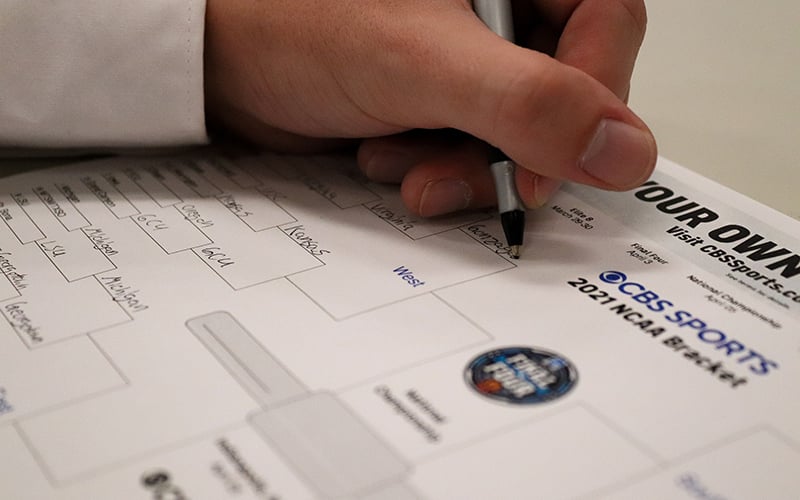 Plenty of Arizonans have been filling out NCAA Tournament brackets this week. The Arizona Department of Gaming cautions that pools can be illegal. (Photo by Marlee Smith/Cronkite News)

PHOENIX – After a one-year hiatus due to the COVID-19 pandemic, March Madness has returned and sports fans across the country have put pen to paper hoping to fill out a perfect bracket, the odds of which are nearly impossible (about 1 in 9.2 quintillion).

In Arizona, sports betting is still illegal. However, state law does allow for social gambling, which includes bracket challenges or tournament pools among friends and family.
Within reason.

According to the Arizona Department of Gaming, four rules must be followed when placing a bet on the tournament or participating in a bracket challenge:

The ADG also warned of signs of illegal gambling. When betting on the tournament, fans should be watching out for participation fees, such as “suggested or voluntary donations,” hosts keeping a percentage of the pool, required minimum purchases for participation such as food or beverage purchases, unequal odds and underage participants (younger than 21).

“Although sports wagering is currently illegal, Arizonans are still able to be a part of the action and participate in legal betting options,” said Ted Vogt, director of the ADG. “As long as individuals follow state law, March Madness bracket tournaments commonly played among friends and family can be completely legal.”

That increase can be attributed to the increased availability of legal sports betting options across the United States. This year, about 73.6 million more Americans are able to legally bet on the tournament compared to two years ago.

“The sports betting landscape has changed dramatically since 2019,” said Bill Miller, President and CEO of the AGA. “As a result, tournament betting has transformed. With more legal, regulated options than ever before, millions of customers now have safer ways to enjoy all the fun and suspense only March Madness provides.”