Arizona Coyotes forward Christian Dvorak has become the team’s top center, thanks in part to studying one of the game’s best at his position, Boston Bruins center Patrice Bergeron.
(Photo by Alina Nelson/Cronkite News) 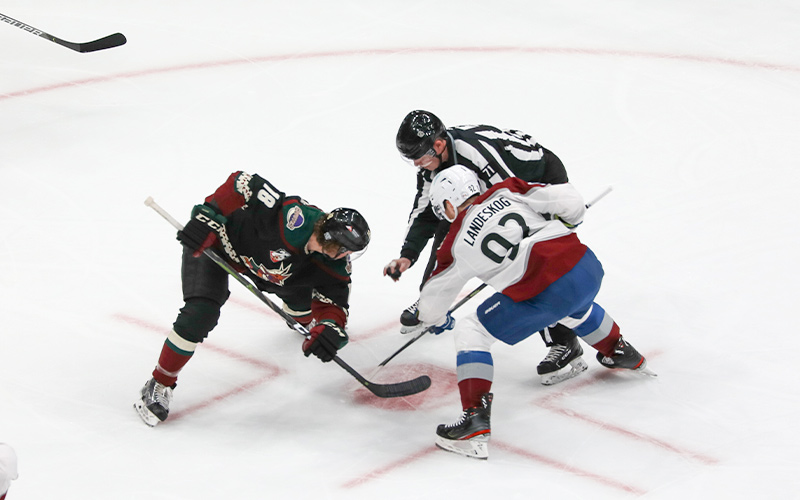 No, not in a classroom with a paper and pencil in hand.

Rather, on the ice with a set of mitts and a freshly taped stick.

Dvorak has evolved into the Coyotes’ top center in his fifth season with the team, thanks in part to studying one of the game’s best at his position, Boston Bruins center Patrice Bergeron.

“It has been helping,” Dvorak said. “Bergeron is one of the best centermen in the league. I wanted to watch some videos of him and learn from him.”

Following the pandemic-shortened training camp into the condensed 2020-2021 season, Dvorak promptly walked into head video coordinator Hunter Cherni’s office and specifically requested for film of Bergeron, a four-time Selke Trophy Award winner and seasoned veteran, in order to round out his skill set as a reliable, two-way center.

“I believe in karma. You work at your game and you’re going to get good results and Dvo (Dvorak), you know, he’s a poster child of it.”

“Dvo” has been reaping in the rewards. The forward, 25, leads all Coyotes’ centers with nine goals and 17 points in 26 games. His nine goals rank fourth among centers in the Honda West Division behind San Jose’s Logan Couture, St. Louis’ Brayden Schenn and Los Angeles’ Adrian Kempe.

While studying Bergeron, Dvorak has placed an emphasis on understanding the power-play “bumper position,” which indicates the middle spot in the slot.

“I still look at his power play video when he’s in that bumper position,” said Dvorak, who leads the Coyotes with five of the team’s 18 power-play goals. “I’m trying to learn some things, and it’s definitely helped out.”

As the Coyotes set up around the perimeter of the offensive zone, Dvorak buries himself in between his opponents’ defensive formations, intending to redirect shots on goal and pounce on loose rebounds in and around the goal crease.

“Just the way Bergeron can get inside and out of that bumper position, and then go downhill and make those plays. He’s learning from a guy like that,” Tocchet said.

Dvorak has been acing his tests on the ice, getting into a habit of lighting the lamp with a hard-nosed effort toward the net.

“That’s where the goals are scored,” Dvorak said. “Just get to the net, whether it’s tips or rebounds or guys make a nice back-door pass to me, I just try to do as much as possible.”

Scoring isn’t the only avenue of increased stock in the Coyotes’ 58th overall pick from the 2014 NHL Draft.

Dvorak has emerged as the team’s best 200-foot center, matching up against the opposing team’s top-line units on a nightly basis, in addition to playing heavy minutes on the power play and penalty kill. His 19:08 average time on ice leads all Coyotes forwards, a full minute more than the next forward in Coyotes’ leading point producer Conor Garland with 17:52.

Perhaps, the most important aspect in Dvorak’s game is his faceoff expertise, another skill he’s gained knowledge in from prominent centers, including Bergeron and Pittsburgh’s Sidney Crosby.

The 6-foot, 195-pound forward has been the go-to guy for Tocchet in any situation where the team is in need of a clean draw in the red dot. Dvorak owns a 53.31% faceoff win percentage, sitting first among Arizona’s centers, which include new additions Derick Brassard, Drake Caggiula, John Hayden and Tyler Pitlick.

“I think his hockey IQ has gotten better,” Tocchet said. “His reads, his down-low play has been getting better every year, his 200-foot game is getting better and obviously coming up with big moments, that’s what we need. We need guys to have those big moments and he’s one of those guys that has supplied that this year.”

Speaking of big moments, Dvorak has put on quite the show in shootouts this year, going 3 for 3 with one familiar motion.

In each attempt against St. Louis goaltender Jordan Binnington, Los Angeles goaltender Jonathan Quick and Anaheim goaltender Ryan Miller, Dvorak shifts toward the right side of the ice. He fakes a forward-hand shot before switching to his backhand and lifting the puck up and over the pad of the outstretched netminders.

Doing so, Dvorak has perfected the craft of his shootout finish, well known as “The Vrbackhander” in the arsenal of former Coyotes winger Radim Vrbata.

“If it’s done right then it’s really hard for a goalie to stop it because the goalie has to respect the shot,” Vrbata told Craig Morgan of AZ Coyotes Insider. “The key is to fake that shot on your forehand by opening the blade and making the goalie think that you are shooting. You really have to sell the shot and if you do, they have to respect it.”

Dvorak began working on the signature move during training camp with no prior knowledge of its historical significance. Among players with at least 70 shootout tries, Vrbata ranks fifth all-time with a 42.9 shootout scoring percentage, behind T.J. Oshie, Jonathan Toews, Frans Nielsen and Brad Boyes.

Dvorak has found similar fortune when executing the sequence, just like when Vrbata captivated the crowds of Jobing.com Arena back when the team was named the Phoenix Coyotes.

“I had a couple moves,” Dvorak said. “It seemed to work at practice. I went with that one and stuck with it.”

The left-handed shooter was even awarded the opportunity to showcase the move on his first career penalty shot where he handily fooled Anaheim’s John Gibson, which created a momentum-shifting, four-goal rally to lift the Coyotes over the Ducks, 4-3, for a critical four-point swing on home ice.

Christian Dvorak (@10_CD) on the penalty shot and boy was it sweet. pic.twitter.com/Rn3j5wQbHE

Those four goals are prime examples of the fifth-year center smoothly handling the adversity of pressure when the game is on the line.

“There’s moments you need people to come through, and he’s coming through,” Tocchet said. “Those are pressure situations. You always want players who can play under pressure and Dvo is showing up for our team right now.”

If the Coyotes reach another shootout this season, it would be no surprise to see No.18 hop over the boards and take another shot with “The Vrbackhander.”

Dvorak isn’t one to offer much personality when speaking with the media following morning skates and game nights.

He can be simple and brief in his remarks when asked a question about his routine or a recall to the setup of a scoring play. It’s understandable, due to the nature of talking with unfamiliar faces through Zoom, rather than holding more casual conversations in the locker room setting.

But there’s a joyful side to his character that many don’t see. One that many of his fellow Coyotes thoroughly enjoy.

“He’s one of the most liked guys in the locker room,” Coyotes forward Christian Fischer said. “He’s one of the funniest, too. I know you guys are probably shaking your head at that, but he is. He is a funny, funny guy.”

“In the room, he’s a completely different guy,” Coyotes defenseman Jakob Chychrun added. “Everyone loves Dvo. He’s a guy people kind of migrate to. We definitely see a side that you guys, fans and the public don’t see.”

On the ice, Dvorak puts on his game face, striking fearlessness into his opponents’ eyes. The aggression makes sense with his knack to constantly drive hard toward the dirty areas around the blue paint and hunt for pucks with a physical edge on board battles.

When he’s getting ready in the locker room with his teammates, “Dvo” is all game for cracking some jokes and tossing around one-liners with his quick wit.

“He’s one of my closest buddies on the team,” Chychrun said. “He comes up with stuff on the fly. He always has something to come back at you with. It’s funny. He’s definitely a voice in the room that guys like to hear and get a laugh from.”

Whether it’s a hard-nosed dive for a goal or a clever quip to a teammate, Dvorak’s presence is making a clear, positive impact for the Coyotes in their quest to make the Stanley Cup Playoffs for a second consecutive season.