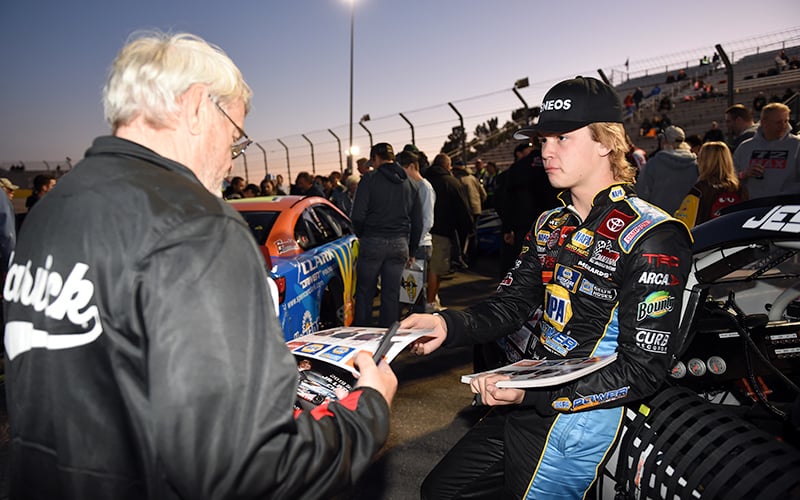 Jesse Love (right), a 16-year-old who competes in the ARCA series, takes all of his classes and lives in North Carolina with his uncle so he can focus on racing instead of in California with his immediate family. (Photo by Chris Williams/Icon Sportswire via Getty Images)

PHOENIX – Many young children grow up with dreams of flying around speedways in the pristinely painted stock cars of NASCAR’s highest level, the Cup Series.

It is rare to end up in the Cup Series but many drivers try anyway by cutting their teeth in lower-level racing circuits.

At Phoenix Raceway today, a group of young drivers with Cup aspirations will take part in the ARCA Menards Series General Tire 150.

The ARCA series is a stock car circuit separate from NASCAR. It does, however, have a relationship with NASCAR. ARCA uses cars that formerly ran in the Cup Series and races at Cup tracks such as Daytona International Speedway and Phoenix Raceway. 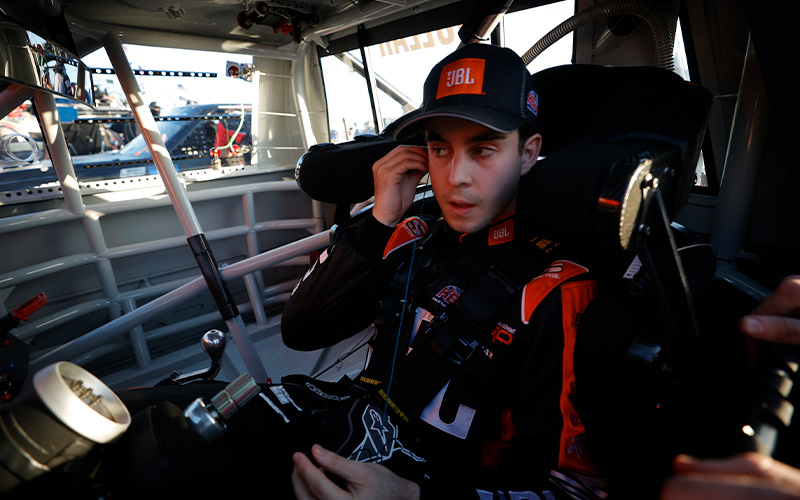 “You have the similar body style, you have the similar chassis, similar motors as to whatever the other three series (Cup, Truck and Xfinity) run and I think it’s a great place for young drivers like me, especially with the age limit being a little bit lower,” said Heim, 18, who is from Marietta, Georgia. “I can get a quicker start and once you’re 18 you can jump right into a full-time year and already have that experience. So I really think it’s a good place for young drivers to go to get started.”

Jesse Love, who became the youngest champion of the ARCA Menards West Series in 2020 at 15, is unable to drive full time on the ARCA Menards Series because is is just 16. He is allowed to run certain races in the main ARCA series including Phoenix today.

Love said racing in the series is helpful to a driver’s growth because of the tracks ARCA runs.

“You get to go to a lot of bigger tracks and learn how to drive these big, heavy stock cars,” Love said. “They’re like tanks to drive sometimes. And for me, I’ve developed so much running this series that it’s definitely been really good to me. … A decent amount of the tracks you go to in ARCA series will kind of come back to the Cup series. … Whether it be places like Dover, Bristol, Gateway, all those places. So definitely really important to get the most you can out of each weekend.”

While the young ARCA drivers live exhilarating lives, traveling around the country and racing at such a young age can take away normal youth experiences. Love, a sophomore in high school, lives in North Carolina with his uncle so he can focus on racing instead of in California with his immediate family. He takes all of his high school classes online.

Although the Cup Series is still a faraway dream for most of ARCA drivers, Drew Dollar, a 20-year-old driver in the ARCA Menards Series from Atlanta, has already taken the next step in getting to the Cup level.

After finishing in the Top 10 in 14 of his 20 ARCA races in 2020, he is competing part time in 2021 for Kyle Busch Motorsports in the NASCAR Camping World Truck Series, the level above ARCA.

In his first race for the legendary Cup Series driver’s team, he crossed the finish line in the No. 10 position at Daytona in February.

“That’s a really good team that I’m on there and I just need to work hard and to be at the top of my game,” Dollar said about racing for Busch’s team. “And trucks, it’s a steep learning curve and I think I’ll be alright. I know I have a good team behind me.”

Dollar, Love and Heim will test their abilities against a tricky Phoenix track when the General Tire 150 green flag drops at 5:30 p.m., Arizona time.