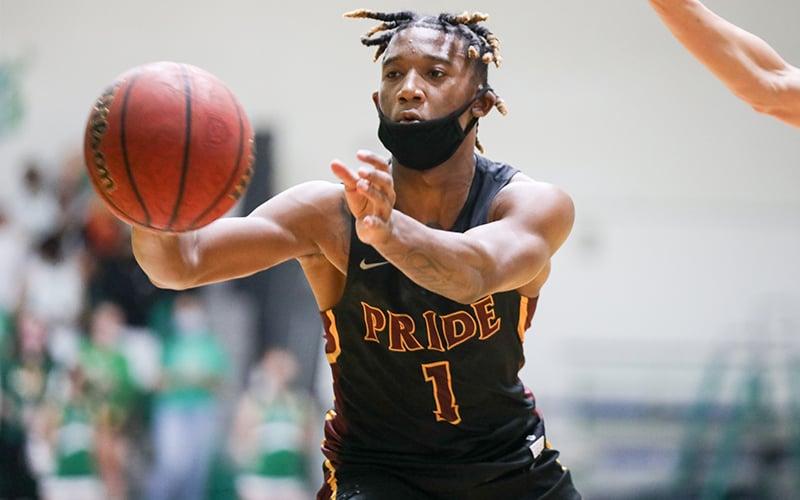 Mountain Pointe guard Mark Brown passes to a teammate against St. Mary’s. The Pride enter the 6A playoffs as the No. 6 seed and face No. 11 Valley Vista Thursday. (Photo by Alina Nelson/Cronkite News)

But after an abbreviated season rife with challenges, the Valley’s 6A boys high school basketball teams are ready to get under way Thursday in the state championship bracket.

Central region powers Desert Vista and Mountain Pointe took meandering roads to reach their spots on opposite sides of the bracket, but both teams now arrive battle-tested for the state playoffs.

Desert Vista earned the No. 12 seed and will travel to No. 5 seed Liberty. The two teams have not faced off this season. No. 6 Mountain Pointe will host No. 11 Valley Vista, which the Pride beat 65-60 at home on Feb. 13.

The Ahwatukee rivals had their first matchup postponed due to a positive COVID-19 test on Desert Vista. In their rescheduled game on Feb. 22, the Pride tamed the Thunder, 74-56.

But when the two reunited on Desert Vista’s senior night March 2, the Thunder bolted out to a 30-point first-half lead and held on to win 88-79.

First-year Desert Vista coach Jordan Ballard said the night was a special way for the Thunder’s seniors to finish out a season that was initially canceled. 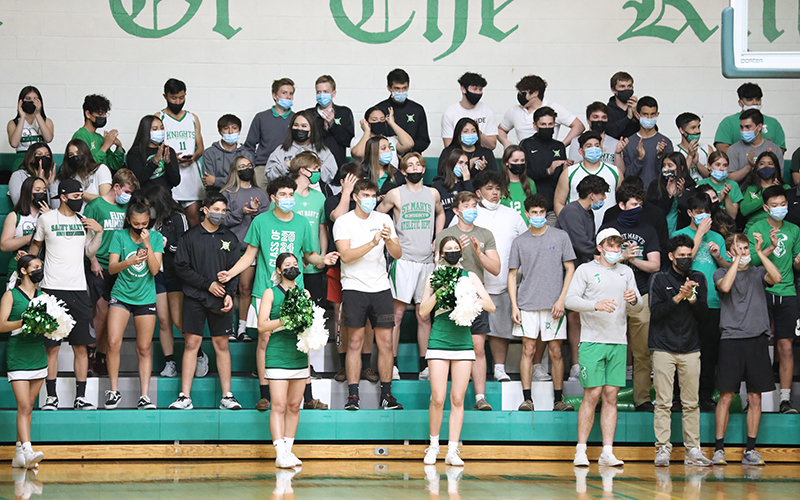 “Getting the chance for a senior to play Mountain Pointe on senior night in a season where we weren’t supposed to have a season at all and then to come out on top, I can’t think of a better way other than winning a state championship to end my senior season,” Ballard said.

“It felt phenomenal. I know they were ecstatic. I was actually a little more emotional than I thought I’d be because this is my first group of seniors, so I’ve only known them since Dec. 5.”

Mountain Pointe, meanwhile, closed out its season March 5 with senior night against Desert Ridge, a team that had conquered the Pride in the teams’ previous meeting.

Senior guard Jason Kimbrough said he cherished his senior night experience. He knew it could have been taken away by the pandemic, and it was for a moment when the AIA temporarily canceled the winter sports season.

“When the cancellation was in the works before the start of the season, that was kind of a moment that sat with me,” Kimbrough said. “Almost thinking like, I’m not gonna be able to have a true senior night at the school that I’ve always been at.”

And while the full complement of fans normally in attendance on senior night was absent, Kimbrough was still able share the moment with those who mean the most to him.

“Even though we couldn’t have all those fans, just our parents being able to be in the stands with us is something that we definitely love being able to have,” Kimbrough said.

In addition to putting on senior nights while navigating COVID-19 protocols, both schools faced loaded schedules stemming from replaying games postponed earlier in the season.

Desert Vista faced back-to-back four-game weeks. During March 1-5, the second of those weeks, they played No. 8 Highland twice, as well as the No. 6 Pride and No. 13 Chandler. 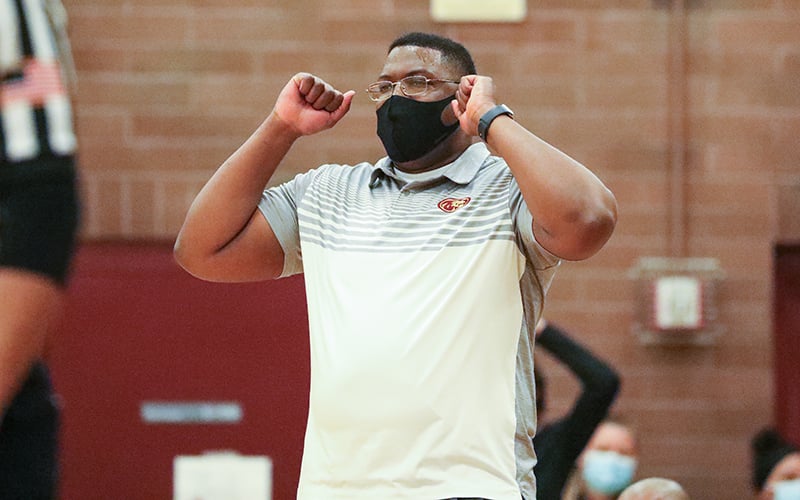 Ballard said he told his team they had to win at least two of those games. They did just that, beating Mountain Pride and Chandler while closing the season with a 2-point loss to Highland on March 5.

“It sounds easier than it is and it sounds fun. Now, for the players it’s probably more fun. But for a coach, it’s very stressful, because you want to prepare your team, but you can’t,” Ballard said. “You can’t prepare for who you’re playing against because you have a game the next night.

“That’s a week you can easily go 0-4, and we went 2-2 and we lost on a tip-in against Highland. So we easily could have went 3-1. So that was a credit to my guys for just their resilience. But it was definitely tough. I wouldn’t recommend it, and I wouldn’t want to have too many more of those.”

Mountain Pointe coach Kaimarr Price said his team enjoyed their one four-game week. The Pride faced Desert Vista in the teams’ rescheduled matchup as well as Pinnacle, 4A power St. Mary’s and Highland from Feb. 22-26.

“It actually felt more refreshing than a regular week,” Price said. “I don’t know. I think (the players would) rather play games than to practice. So just their attitudes are much better.”

Kimbrough, one of those players, mostly concurred with his coach’s assessment.

“Getting cooperation from everybody on the team, it made those four games easier,” Kimbrough said. “Everybody had good energy, and everybody was able to rest when they needed to … With the conditioning that we put ourselves through, I don’t think there’s any stretch of days where we have games in between where we should feel tired or even look tired.”

Desert Vista guard Andrew King, a junior who is committed to Rice on a basketball scholarship, thought the experience of playing eight games in two weeks helped prepare him for the rigorous schedules he will face at the next level.

“It’s kind of just getting me ready for college,” King said. “It’s going to be like the same thing. You’re gonna have games every day or practice every day, almost. It’s just kind of preparing me, I would say. So I really just enjoy it.”