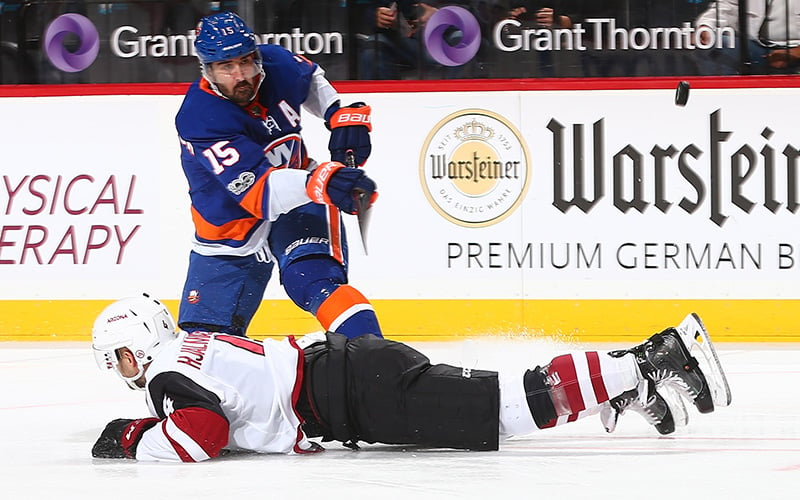 This is not an unfamiliar position for Niklas Hjalmarsson, who embraces blocking shots for the Arizona Coyotes, and ranks 19th all time. (Photo by Mike Stobe/NHLI via Getty Images)

PHOENIX – Niklas Hjalmarsson has never been afraid to take one for the team.

Well, make that two or three.

He’s made a living blocking shots on a nightly basis over the course of his 14-year career in the National Hockey League.

“It just comes naturally for me,” Hjalmarsson said.

On Wednesday night, Hjalmarsson played in his 800th career game when the Arizona Coyotes earned a 3-2 victory over the Kings at the Staples Center in Los Angeles.

“It’s something that I’m very proud of,” Hjalmarsson said. “Eight hundred games are a lot of games, I didn’t think that (would happen) growing up where I’m from, way out in the countryside. I’ve had a lot of fun along the way and an opportunity to play with a lot of good players, a lot of great friends and a lot of good memories.”

Those good memories have come with some bruises, but he’s shrugged them off, put on his hard hat and gone right back to work.

In nearly 20 minutes of ice time on his milestone night, the Coyotes’ alternate captain blocked two shots on goal, including one just moments into his opening shift.

Hjalmarsson has blocked 1,566 shots, ranking 19th all-time in the category since the NHL began tracking that data before the 2005-2006 season.

Tocchet, who played over 1,100 games in the NHL, praised the three-time Stanley Cup champion for his commitment on the blue line and his willingness to sacrifice his body.

“It’s a big milestone,” said Tocchet, who was behind the bench for 177 of Hjalmarsson’s 800 games. “He’s an elite penalty killer and shot blocker. Those are the little things, the unsung hero things that nobody talks about or really appreciates.”

Hjalmarsson hails from Eksjö, Sweden, a small, antique town with a population of less than 10,000. He became the 14th Swedish defenseman to reach the 800-game plateau.

“I’m sure in 10 or 15 years, it’ll be down to 100 almost, the way Sweden produces defensemen nowadays,” Hjalmarsson said with a chuckle.

The shot-blocking has been a core component of Hjalmarsson’s game ever since he started playing hockey.

Along his journey through the Swedish junior leagues, he found a role model in former Detroit Red Wings defenseman and fellow countryman Niklas Kronwall, who skated in 953 games during his 15-season tenure in the Motor City.

“He was one of the guys I definitely watched and liked the way he played the game,” Hjlamarsson said. “He was maybe more of an offensive type of player, but just the way he played defensively – his gap control and his stick – a lot of that stuff was fun to see and learn from.”

Hjalmarsson, a 2005 fourth-round draft pick by the Chicago Blackhawks, still remembers his first game against Detroit like it was yesterday. 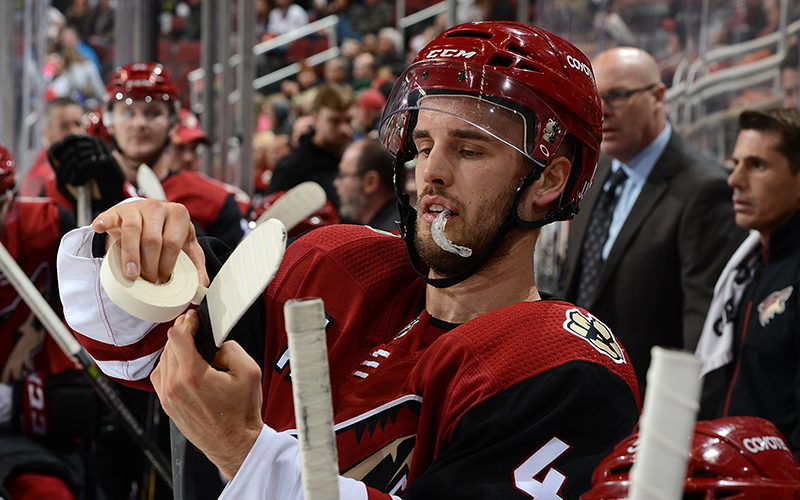 On April 11, 2009, Hjalmarsson scored his first career goal in the NHL against Kronwall and a Red Wings lineup infused with Swedish talent.

“It was big for me as a Swedish guy coming into the league playing Detroit in Detroit,” Hjalmarsson said. “To be in Joe Louis Arena and play against (Tomas) Holmstrom, (Henrik) Zetterberg, (Johan) Franzen, Kronwall, (Nicklas) Lindstrom and all those guys, that was a pretty cool moment for me to line up on the faceoff and see all those guys all of a sudden on the other side. I felt honored to be on the same ice. That’s a memory I’m never going to forget.”

But he knows that.

He recognized his true role on the blue line early on in his first few seasons with Chicago, and adapted adequately with three championships to boot.

“I was honest with myself, saying, ‘What am I best at? What’s my best qualities?’” Hjalmarsson said. “That’s when I realized I’m going to try to be as good as I can in what I’m good at. That was going to be my biggest chance for me to stay long-term in this league. Once I went for it, I felt that it was a successful way to look at it. It’s been working out so far.”

Hjalmarsson has tallied one assist in 20 games and has never topped more than 26 points in a single season. His area of expertise lies in the defensive zone, where he’s been a reliable go-to guy for Tocchet’s primary unit on the penalty kill, which ranks ninth in the league with an 81.3% efficiency.

“He’s willing to block a shot,” Tocchet said. “Penalty kill is about blocking shots, and it seems when the puck goes on (Hjalmarsson’s) side, the other team is reluctant to shoot it because they want to get it to the other side, because he blocks those shots.”

Known by his teammates and coaches as “Hammer,” Hjalmarsson takes pride in taking one for the team, even if it leaves a mark.

“It’s something I’ve always done since I’ve started playing,” Hjalmarsson said. “I’m just trying to do whatever I can to prevent the other team from scoring goals.”

In his fourth season with the Coyotes. Hjalmarsson has felt comfortable playing in the desert after being traded from the Blackhawks in 2017. He admitted that the transition wasn’t easy at first.

“It was tough to get traded,” Hjalmarsson said. “Once I settled in here and started to get into the team and realized what a place it was to live at and play hockey, I felt very fortunate to get traded to this place and play hockey in the desert. To have my kids grow up here, go to school and live the lifestyle here is something that I will carry with me for the rest of my life.”

When asked if he thinks he’ll climb the mountain to the 1000-game milestone, Hjalmarsson couldn’t answer with complete optimism.

“I guess we’ll see,” said Hjalmarsson, a pending unrestricted free agent reaching the end of his two-year, $10 million deal. “I’m just going to try and play as hard as I can and help out the team as I usually try to help out the team.”

For now, “Hammer” will continue to go about his business, blocking one shot at a time.