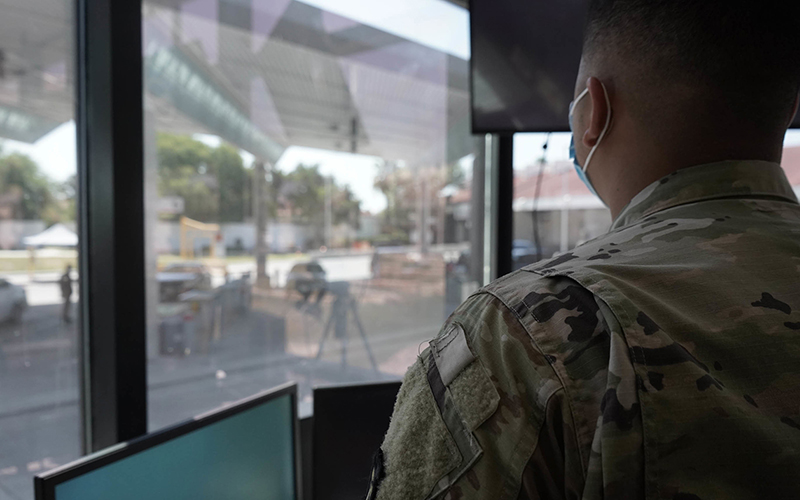 U.S. Army Spc. Adrian Salazar observes a bridge at the Customs and Border Protection crossing in Laredo, Texas, in August, one of many support jobs performed at the border in recent years by National Guard soldiers and active-duty military personnel. A recent audit questions the Defense Department’s cost estimates for those deployments. (Photo by Staff Sgt. De’Jon Williams/Air National Guard)

WASHINGTON – The Pentagon did not have reliable estimates for the cost of its work supporting Homeland Security efforts on the southwestern border and did not assess the impact of those efforts on military readiness, a new report says.

The report by the Government Accountability Office also chided the Defense Department for failing to fully report its border costs to Congress in 2019, and said the Pentagon and Homeland Security need to come to an agreement on the level of long-term support.

The report, released Tuesday, was requested by a group of House and Senate Democrats and looked at a sample of four of the 33 “requests for assistance” at the border between 2018 and 2020.

Rep. Raúl Grijalva, D-Tucson, a longtime critic of a militarized border, said the report reaffirms his claim that former President Donald Trump’s use of active-duty and National Guard troops was a bad idea.

“There is nothing to gain from keeping the troops and their equipment at the border, other than promoting former President Trump’s anti-immigrant agenda and terrorizing border communities,” Grijalva said in a statement Thursday. “Our country has a long-standing norm that keeps the function of the U.S. military separate from domestic law enforcement affairs.”

Neither the Pentagon nor Homeland Security responded to requests for comment. But in its response to the GAO report, the Defense Department disagreed with most of the recommendations in the report.

The Pentagon said it met its standards for cost estimates, which are only designed to “provide a rough order of magnitude cost” to help officials make decisions on “emergent, and often dynamic contingency operations, often on very short notice.”

It made a similar claim about the impact of border assistance on troop readiness, saying requests regularly come from different federal agencies, “some on short notice, with safety and security, live-saving, or life-sustaining implications requiring a prompt response.” Those requests are assessed at two different levels to determine if the aid is appropriate and how it will affect readiness, which lets the department “account for and balance unit readiness, competing requirements and potential future contingencies.”

The Pentagon first sent National Guard troops to the border in April 2018 to support Customs and Border Protection – soldiers can only perform a support role in domestic affairs – as part of Trump’s efforts to tighten border security. Guardsmen from 34 states and territories were deployed over the next two years, with as many as 2,579 on the border at one time.

In November 2018, the Pentagon also sent 5,815 active-duty soldiers to the border in response to what Trump called “caravans” of Central Americans heading north.

The GAO said the Pentagon spent at least $841 million for border operations from 2018 to 2020. That did not include the cost of salary and benefits for active-duty soldiers, which the Defense Department does not typically charge other agencies it is assisting.

But in the four requests for assistance that they looked at, GAO investigators found that “DOD did not present reliable cost estimates for fiscal year 2019 that would allow the Secretary to gauge how providing support could affect the department’s budget.”

Elizabeth Field, director of the Defense Capabilities and Management team for the GAO, also said the Pentagon did not adequately assess how assistance at the border would affect individual units and their capacity to respond to “future responsibilities.”

Field said tasks given to military personnel ranged from packaging food for detained migrants to assisting with surveillance at ports of entry. In a number of cases, she said, requests for assistance were approved before a review of their impact on units’ availability could be completed.

In one example from fiscal 2019, the department approved deployment of nearly 750 National Guardsmen for “detention support” that included making welfare checks on detainees, distributing food and driving trucks and vans for border authorities. That particular deployment was stopped in September 2019 over concerns that “personnel were not performing military functions and that continued support for the mission would negatively affect military readiness and morale,” the report said.

U.S. Army Sgt. Juan Arriaga repairs a light on a Border Patrol truck in Brownsville, Texas, in August. Thousands of National Guard troops and active-duty soldiers were deployed to the border, but they could only act in support roles – delivering meals, driving and repairing vehicles and assisting with border surveillance, among other jobs. (Photo by Staff Sgt. De’Jon Williams/National Guard)

The report also said the Pentagon did not accurately report its costs to Congress. While DOD reports to lawmakers showed the department had obligated about $234 million in fiscal 2018 and 2019 combined, Field’s team found the actual cost was $490 million.

That was the one area where the Pentagon agreed with the GAO’s recommendations. It blamed the problem on the fact that Congress did not renew its request for the fiscal 2019 report until several months into fiscal 2020, and the fact that the onset of COVID-19 further delayed reporting.

The GAO also reported a disconnect between Defense and Homeland Security on their respective roles at the border in coming years. Field said the Pentagon “doesn’t want to be indefinitely providing support, they’re hoping to be reactive, while DHS says they think they need support indefinitely.” The report said DHS officials expect to need the same level of assistance from DOD for the next three to five years.

Grijalva said the “troop deployment continues to be costly, wasteful, completely unnecessary, and stereotypes the borderlands as crime-infested territory,” and he called on President Joe Biden to end the deployments altogether.

Laiken Jordahl, borderlands campaigner for the Center for Biological Diversity, agrees the military has no place at the border, asking how many communities in the U.S. “have active duty military running around their neighborhoods and their homes?”

He also said the presence of troops on the border is detrimental to people and wildlife there.

“It’s an existential threat for wildlife, we have seen birds get stuck in that razor wire and die,” Jordahl said. “Having men with guns in your community who are not from your community does not make your community a safer place.”