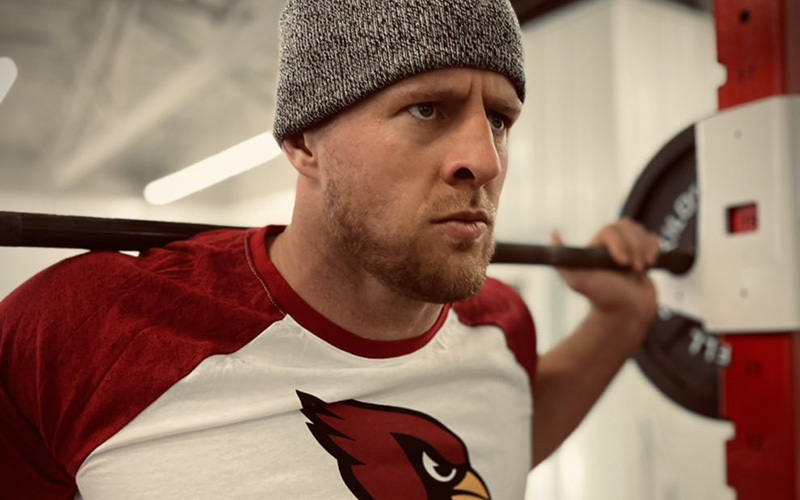 J.J. Watt announced he had signed with the Arizona Cardinals when he shared a photo of himself on Twitter with a Cardinals jersey. (Photo courtesy J.J. Watt Twitter account)

In 2020, Keim’s one shining moment was acquiring wide receiver DeAndre Hopkins from the Texans in a trade that not only delivered one of the NFL’s most dangerous offensive weapons but rid the Cardinals of running back David Johnson and his hefty contract.

And Monday, Keim and the Cardinals pulled off the long-shot signing of defensive end J.J. Watt, a five-time Pro Bowl selection who was released Feb. 12 by the Texans. It gives a significant boost to a Cardinals team that hasn’t reached the NFL playoffs since 2015 and finished 8-8 last season.

The news was broken by a reliable source, too. Watt tweeted a photo of himself working out while wearing a Cardinals t-shirt with a two word comment. “Source: me.”

pretty convenient when the owner is also a pilot…

Like most Cardinals fans, Football Morning In America columnist Peter King was surprised by the move and the terms of the agreement Arizona made with a player who will celebrate his 32nd birthday later this month.

“They probably had to go a little farther than they really wanted to go,” King said. “That’s a lot of money guaranteed to a guy who’s missed a lot of games. But, they add more veteran experience to their club with Watt.”

The deal is reportedly worth $31 million for two years, with $23 million guaranteed. It is a big chunk for a player who produced nine sacks in 24 games over the last two seasons after posting 16 in 2018. King believed Watt would take less money to go to another team, like the Green Bay Packers or the Buffalo Bills.

The #AZCardinals are giving JJ Watt a 2-year deal worth $31M with $23M guaranteed, source said.

Recent seasons have been subpar compared to the expectations Watt created for himself as a three-time Associated Press NFL Defensive Player of the Year. Injuries contributed to a dropoff in production, but Watt played in 40 of his last 48 games, including all 16 in 2020, and recorded 25 sacks over that stretch. King believes it’s enough to give the Cardinals reason for hope.

“He’s been productive over that period of time,” King said. “He’s very good rushing from inside as well. I wouldn’t be surprised if he still has two very good years left.”

The Cardinals have a history of signing marquee names nearing the end of their primes, like Emmitt Smith, Edgerrin James, Kurt Warner, and Terrell Suggs. Watt is closer to his prime than any in that group and has the opportunity to pair with Chandler Jones, who is the only NFL player with more sacks than him since the 2012 season.

It’s been an emotional start to the year for the former Texans star, who asked to be released following 10 seasons with the team.

Hevideo taped a heartfelt message to Texans fans after Houston granted his requested and finished it with “I’m excited and looking forward to a new opportunity, and I’ve been working extremely hard. But at the same time, it is always tough to move on. I just want you guys to know that I love you. I appreciate you. I appreciate the McNair family for giving me – drafting me, giving me my first opportunity in the NFL.

Hopkins, Watt’s former Houston teammate, tweeted, “Life is good,” in response to Watt’s announcement. The two had hinted about a potential reunitement in Instagram posts a few weeks ago.

Watt will have to make his fresh start with a new uniform number because the No. 99, worn by Marshall Goldberg of the then-Chicago Cardinals from 1939-48, was retired by the franchise.