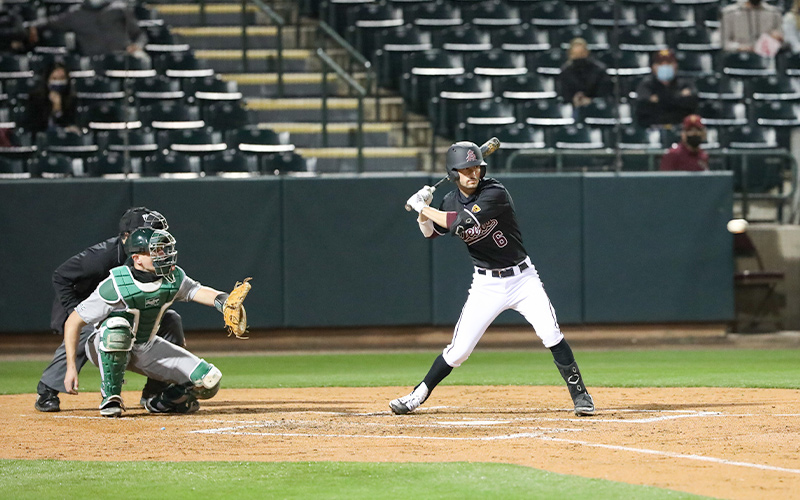 PHOENIX – Dave Rasley had attended every single Arizona State baseball home opener since 1984 – until this year.

Rasley, an ASU alum of 1978 and former Tempe High School teacher, saw his annual tradition of attending Opening Day of Sun Devil baseball come to an end on Feb. 19 after 37 years.

“It was horrible,” said Rasley, who has been a season ticket holder since 1985. “It was so hard to just sit here and watch on the computer screen. … I never miss any games and this was just so hard to know that 10 miles away, the games were being played and I could not go.”

In normal circumstances, Rasley would be cozied up in the seats of any of his 14 season tickets that he owns in Section 11, Rows 3 and 4, the first two rows right behind the Arizona State dugout along the first base line.

But instead, Rasley and many other Sun Devil fans and season ticket holders had to watch via the ASU Live Stream as ASU beat Sacramento State in two out of three season-opening games last weekend. Pac-12 regulations prohibit fans from attending any sporting competitions with the exception of small groups of family members and family friends.

Tomorrow when the @ASU_Baseball Opens the 2021 Season it will be the first Home Opener I've missed since 1984. Want to Thank (Sarcasm) the @pac12 for not allowing any fans in an outdoor 6,000 seat stadium with plenty of room for social distancing. Makes No Sense. 😥😥 pic.twitter.com/f3aePCAME1

“I watched all three games via the live stream,” said Ron Davini, a former ASU catcher for the 1967 national championship team who is also a member of Rasley’s season ticket group. “There’s no comparison. It’s better to be in-person. It’s so much fun seeing the live action and hearing the pop in the glove.”

With college baseball’s opening weekend in the books and MLB spring training coming soon, it has raised an important question from many ASU baseball fans around the Valley.

Several SEC teams, including Florida, South Carolina and LSU, allowed a limited number of fans to their opening weekend games while adhering to state guidelines.

Nothing but respect for these guys! https://t.co/nqrCkpEMpf

The 15 Cactus League teams are planning to allow limited attendance for their spring training games this season.

So why not a limited seating plan in the Pac-12 and at Arizona State for baseball?

Totally agree Dave. Beyond frustrating that major league sports have fans here but we can’t watch ASU baseball. It’s outside and the season ticket holders who missed out on a “what could have been” season last year need our baseball 😢

Sure would be nice if they would allow limited capacity fans with safety measures in place.

Phoenix Municipal Stadium holds a current capacity of 5,300 fans. A reopening at 25 percent capacity would allow the stadium to welcome 1,325 fans, not including scouts and families of the players.

“The problem is I know that there is a lot of moving parts on this and I’m not privy to all the information but as a longtime fan, it’s so hard to not be able to go, especially when I’ve been there game after game,” Rasley said. “I’m there on those cold nights when the wind is blowing and I’m there when we’re playing Arizona when the place is packed. As that type of fan, it is really hard to understand why I’m unable to go.

“I understand it from one perspective – they want to keep everybody safe and I want the players to be healthy and I want them to play. But with such a big stadium, I just don’t see that it makes sense.”

Rasley is close with many of the families of the players and said he was even offered a spot by at least six or seven different families who had an extra ticket. But upon trying to finalize admission for Rasley, he said the families told him that this would not be allowed by ASU and the Pac-12 because “only family and close friends or girlfriends are being allowed.”

@pac12 won't allow it. Had plenty of offers from families but they are prohibited from putting me on the list.

“I guess the thing that puzzles me the most is why can’t I be considered?” Rasley said. “It’s not like I’m adding extra bodies to, let’s say, a player who has four tickets and if they are not using them and they offer me one, what’s the difference between me going and somebody else like one of their family members? That’s the part I don’t quite understand.”

“The Pac-12 announced today that in light of the continued negative COVID-19 trendlines in Pac-12 communities and in the interest of health and safety, it has made the decision to extend the current prohibition on fan attendance at Pac-12 sport competitions taking place on Pac-12 campuses past January 1 and until further notice,” the statement reads. “Student-athlete families will continue to be permitted to attend sport competitions if and to the extent allowed by local public health and campus authorities and in accordance with NCAA guidelines. Each Pac-12 member school will determine its family member attendance policies on these bases.”

The Pac-12 followed up and announced on January 11 that it would be extending its prohibition of fan attendance of sports competitions held on Pac-12 campuses until further notice.

ASU baseball coach Tracy Smith affirmed on Twitter that this is a decision made by the Pac-12 and not by ASU.

Not at the moment. PAC-12 Conference rules prohibit fans at athletic contests. It is NOT an ASU decision. Hopefully the conference expands attendance in the near future so you can come out. 👊🏼😷 https://t.co/hetubs0zN8

The Arizona Department of Health Services reported 939 new cases of COVID-19 on Thursday, including 471 new cases in Maricopa County.

According to CovidActNow.org, the infection rate in Maricopa County is 0.73, meaning each person is infecting less than one other person. 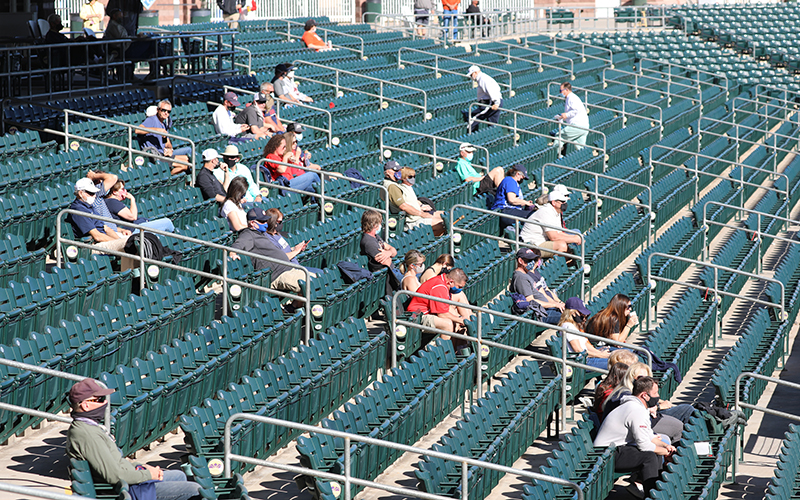 On the Arizona State baseball tickets webpage, it reads that “season ticket holders will be given priority to attend events” if Pac-12 regulations change and Sun Devil Athletics are permitted to host a limited number of fans in attendance.

While Davini is upset he can’t be at the ballpark in person, he understands the situation at hand.

“We’ll just have to play it by ear,” said Davini, who was the Most Outstanding Player in the 1967 College World Series. “It is frustrating. I’d love to be in the crowd. I’d love to sit out by first base and see what’s going on and talk to Dave. That would be great. But I want to make sure these kids are safe.

“The game itself has always been great to me. I would rather give back to the game by not trying to interrupt the health and welfare of people who play.”

Rasley said he would be happy to mask up and social distance if allowed the opportunity to attend a game. As long as he is at Phoenix Municipal Stadium, he won’t be complaining.

“When I’m sitting there and looking out, I call it my happy place,” Rasley said. “I feel so calm. I love baseball. I’ve been a fan forever … Overall, it’s the people, the relationships. I miss the games and everything, but I just miss being at the ballpark.”