Jakob Chychrun, here after scoring a goal against the Anaheim Ducks, in one of the few Arizona Coyotes defensemen who has demonstrated some offensive firepower. (Photo by Norm Hall/NHLI via Getty Images)

GLENDALE – The Coyotes needed a kick in the backside.

Arizona trailed 3-0 to the last place Anaheim Ducks early in the second period. Outhustled and outplayed, especially in the opening 20 minutes, the Coyotes had hit a new low.

“In the first period we were god awful,” Coyotes coach Rick Tocchet said about the Monday game. “It was terrible hockey, probably the worst period (we had played) in a long time.”

Thankfully for Tocchet, Arizona’s poor form didn’t last for long. The Coyotes scored three goals in less than four minutes in the second period, tying the score with nearly eight minutes to spare.

“(It was) a heck of a response,” Coyotes defenseman Jakob Chychrun said. “I think our second period got us back into it and then (we had a) really good third period too.”

The score that tied it for Arizona, an awkward rush toward the net from Chychrun, also came from a rare source, a position that hadn’t produced much offense all season for the Coyotes.

The goal came from a defenseman.

Here's the Chychrun goal. It's still under review, unsure for what exactly. pic.twitter.com/V1d1FgjdjG

Chychrun’s goal against the Ducks was Arizona’s first from a defenseman since Feb. 6.

“I saw (that) we had a good breakout,” Chychrun said. “I saw just an opportunity to get on my horse and move up the ice.”

But it wouldn’t be the last goal scored from the position that week. It happened again two days later.

The same No. 6 slotted the puck into the back of the net for the Coyotes, this time to cut Arizona’s deficit to Anaheim from two goals to one.

Just like two nights before, Chychrun’s goal helped turn a 3-0 deficit into an eventual 3-3 score. And like what happened on Monday night, the Coyotes ended up winning Wednesday’s game as well.

“(Chychrun) has really supplied a lot of offense back there,” Tocchet said.

Chychrun’s offensive value to Arizona can best be shown in the numbers, as he is one of only two Coyotes defensemen to have found the back of the net in 2021, with Jordan Oesterle being the other. And Oesterle has scored just once this season.

The 22-year-old is also second on the Coyotes in assists, and cracks the top five in points scored on the team as well.

“(Chychrun) shoots a lot of pucks,” Tocchet said. “He joins the rush and that’s what you have to do on offense.

“So maybe that’s contagious and it’ll (work) for other guys.”

Tocchet better hope it does. Because outside of Chychrun, Arizona has gotten little to no offensive production from its blue line. 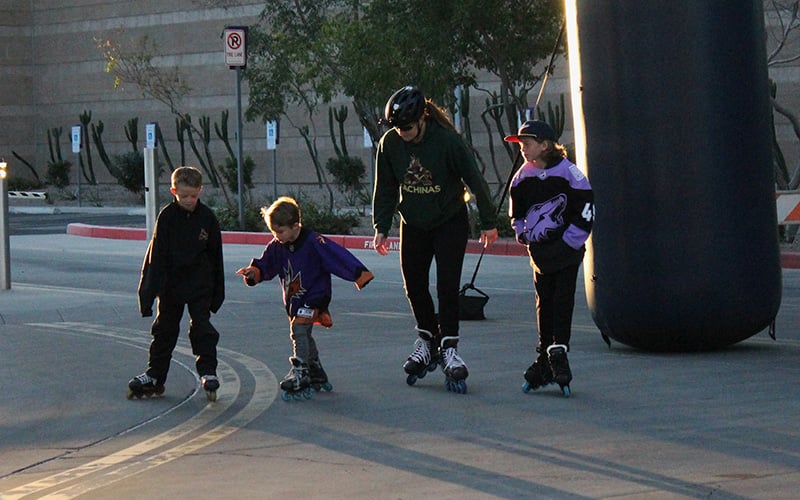 Only three of the 10 defensemen who have played for Arizona in 2021 have tallied more than two points. D-line veterans Alex Goligoski and Niklas Hjalmarsson, in 34 combined games, have managed to produce just one assist, total.

Outside of Chychrun, no other Coyotes defenseman has accumulated a double-digit point total through 19 games this season.

Tocchet, for one, believes that this unit will eventually turn things around.

“I think if you stick with the details and you get shots through and you continue to have that (offensive) mindset, things will go in for other guys,” Tocchet said.

But despite the unit’s lopsided offensive production as a whole, Arizona is still 18th in the NHL in expected goals scored and 14th in scoring chances created.

And with a 9-7-3 record, the Coyotes still have a real shot of snagging the fourth and final playoff spot in the West Division, a position they currently hold in the standings.

But in order for that to happen, and for the Coyotes to reach a second consecutive postseason for the first time since 2012, Arizona will likely need to be better than just an average team offensively.

Their offensive production from the blue line may end up being a big reason behind a potential upswing, with Chychrun as the primary force from the back.

We already know he can give the Coyotes a proper kick in the backside.