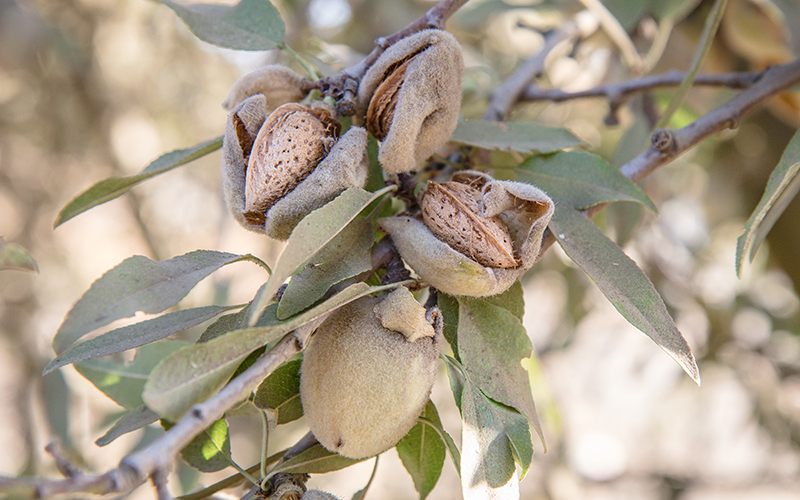 Almonds in their shells emerge at a farm near Fresno, California. The state grows all almonds sold in the U.S., but the highly profitable crop takes millions of gallons of water to produce. (Photo by Marcia Cripps/Unsplash license)

Climate change and extreme weather events are forecast to further reduce water supplies in the American Southwest, and a new futures market could allow water users to recoup losses if the price of water spikes.

The futures market is the first of its kind, allowing investors and farmers alike to bet on how much water in California will cost on a future date.

The idea is to give water users in California a leveraging tool to manage some of the “exposure to price rises in the market,” said Clay Landry, managing director of WestWater Research, a water consulting firm that provided the data for the water index used to price the futures contract.

“In the last few years, when we’ve seen drought conditions, we see a more active spot market in California, and we also see a lot more price volatility,” Landry said. “Most of these markets are very responsive to whether or not there’s a lot of water.”

The move faces pushback from a U.N. expert on human rights and water, Pedro Arrojo-Agudo, who raised concerns water would be treated like “gold, oil and other commodities that are traded on Wall Street futures market,” in a Dec. 20 statement.

“You can’t put a value on water as you do with other traded commodities,” Arrojo-Agudo wrote. “Water belongs to everyone and is a public good. It is closely tied to all of our lives and livelihoods, and is an essential component to public health.” The United Nations did not respond for further comment.

The water futures contract trades the price of water and investors do not determine who has water or the amount of water distributed in a given region. Nor do the cash-settled contracts hold investors responsible for the delivery of water.

The pricing of water futures is linked to the Nasdaq Veles California Water Index, which prices futures based on the weighted-average price of water in five of the most traded water markets in central and eastern California.

“If you’re going to leave it to an opaque system, where nobody knows what the prices are and nobody knows what’s happening, that’s when things fall apart,” Coogan said, referring to the fluctuating price of water throughout the year.

Contracts have a quarterly expiration and represent 10 acre-feet of water, about 3.26 million gallons.

In 2020, the Southwest region experienced its hottest, driest year on record, and forecasts predict 2021 to be just as dry, said Nancy Selover, a climatologist at the Arizona State Climate Office, adding that the agricultural industry will be hit hardest.

To make up for potential water shortages, states may issue water cutbacks that limit the amount of water for use, she said. Shortages are very likely “unless all of a sudden the heavens open up and (California has a) really wet summer and a really, really wet early winter next year,” Selover said.

This year, the climate phenomenon La Niña, which occurs every three to five years, is expected to create drier than normal conditions for Western and Southern U.S. states, Selover said.

Current storm activity in east-central California is helping at the start of the growth season, said Michael Kelley, the president and CEO of California Almond Growers Association. “But clearly, we’re worried about the remainder of the next few months.”

California almond farms cover over 1.33 million acres stretching across 2,000 miles and use an estimated 3 to 4 million acre-feet of water per year. The state produces about 80% of the world’s almonds and 100% of almonds sold domestically, driving more than $21 billion of revenue per year as California’s No. 1 export.

As demand for water increases and long-standing drought conditions reduce water supply, Kelley said, the price of water likely will increase in midyear, when crops need water most.

Kelley is optimistic that the new water futures in California will prove to help water users reduce the risk of fluctuating water prices year round.

“I’m happy that there is a vehicle that’s out there that will help growers potentially in the future be able to mitigate that risk because the cost of water is just tremendous,” Kelley said.