Although a last-lap crash consumed several cars during the Daytona 500 Sunday, no major injuries were reported. Much of that has to do with safety measures taken after the death of Dale Earnhardt nearly 20 years ago. (Photo by David Rosenblum/Icon Sportswire via Getty Images) 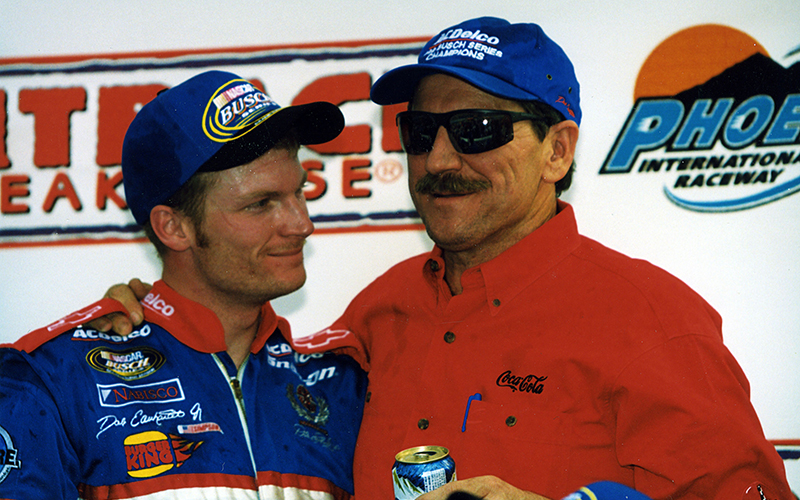 The tragic death in 2001 of Dale Earnhardt, shown here in Phoenix with his son Dale Jr. who had just clinched the NASCAR Busch Grand National Series championship in ’99, helped lead to greater safety measures in the sport. (Photo by ISC Images Archives via Getty Images)

PHOENIX – Dale Earnhardt, or “The Intimidator” as most fans knew him, was probably the most-feared driver in NASCAR history.

His black No. 3 Chevrolet was almost always running at the front or near the front of the pack on Sundays. Even the asphalt he drove on seemed to be afraid of him.

This is why in 2001, while still at the top of the sport at 49, it shocked the world that a place Earnhardt had mastered, a race track, was where he lost his life.

On Feb. 18, 2001 – Thursday will be the 20th anniversary – Earnhardt was racing hard on the final lap of the Daytona 500 when he crashed and hit the barricade in what appeared to be a routine crash. Instead, he tragically passed away from the severe fracture to the base of his skull and the bruising and bleeding to the brain caused by the impact.

The accident was a major wake-up call to those within NASCAR. Driver safety became a priority. And the payoff was obvious Sunday during the Daytona 500 race won by Glendale’s Michael McDowell, who escaped a wild 16-car chain reaction accident after only 15 of 200 laps, as well as a flaming crash on the last lap. No notable injuries were reported out of either collision.

It’s remarkable when those crashes are juxtaposed with Earnhardt’s because at first look, it appears rather tame. But that’s before the industry had the understanding of safety measures that is has now. 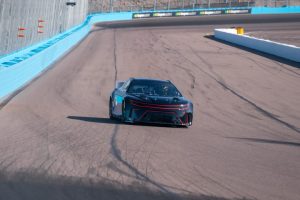 NASCAR’s Next Gen stock car underwent its second on-track test at Phoenix Raceway in 2019 with Joey Logano behind the wheel. (Photo courtesy NASCAR)

His crash inspired change. Since Earnhardt died 20 years ago, NASCAR has added HANS devices for neck support, the Steel Foam and Energy Reduction (SAFER) barrier and more padding and restraint systems in the cockpits.

More modifications followed and among the advancements is the Next Gen car, which will be introduced in the 2022 Cup Series season and was tested in Phoenix in 2019.

Additionally, experts outside the sport were consulted.

“I think it was the right thing to do to get outside opinions and have other people looking at the whole situation,” said Richard Childress, the owner of Earnhardt’s team and a good friend of the driver. “As terrible as it was, and we’ll never get over losing Dale Earnhardt, but there’s a lot that came out of it in the safety part going forward. There’s been some horrendous crashes. Austin Dillon’s (2015 Coke Zero 400), Ryan Newman’s (2020 Daytona 500). You go on down the list of crashes and these drivers have walked away because of the safety.”

The safety enhancements have led to zero deaths in NASCAR’s top-three series since Earnhardt’s death. Nine drivers passed away between 1989 and 2001.

Since 2001, the sport has not been without its horrific crashes. But every time, the driver has walked out unscathed or at least with minor injuries. Newman, driver of the No. 6 car for Roush Fenway Racing, had one of the worst crashes one will ever witness in last year’s Daytona 500 and walked away with a concussion.

Here's the end of the Daytona 500 – Denny Hamlin wins his third but the real story is Ryan Newman, who ended up on his roof after a scary crash at the finish. pic.twitter.com/m4dSy1Jrvx

NASCAR is continuing to increase safety. The Next Gen car, which was crafted by Richard Childress Racing, is nearing its debut.

The vehicle will have the driver moved 1.6 inches toward the center and the door bars are moved more outward.

With the 2021 Daytona 500 being the 20th anniversary of Earnhardt’s passing, the press conference Zoom meetings leading up to the race featured remembrances of the great driver.

Dillon, who is now driving the No. 3 car for Childress, grew up around the series as his dad, Mike Dillon, was a NASCAR driver in the 1990s and Childress is his grandfather.

Austin Dillon, 30, spoke on growing up around Earnhardt and his memories of the time they spent together. He said his fondest moments with Earnhardt were times when the legend was just “messing” with him and joking around with him.

“Those are just fun memories as a kid being around him, someone that was larger than life,” Dillon said. “And now, getting to carry on the legacy of the number out on the track and add to it, I think that’s very special.”

While Childress had a business relationship with Earnhardt, their friendship off the track was strong and something Childress misses.

“It’s tough,” Childress said. “We were good friends. We’ve hunted and fished and did a little bit of everything away from the track and he would call me at night at home, even when he was building his race teams and say, ‘I know you’re having that glass of wine, let’s talk for a while.’

“I miss those moments and so many things.”