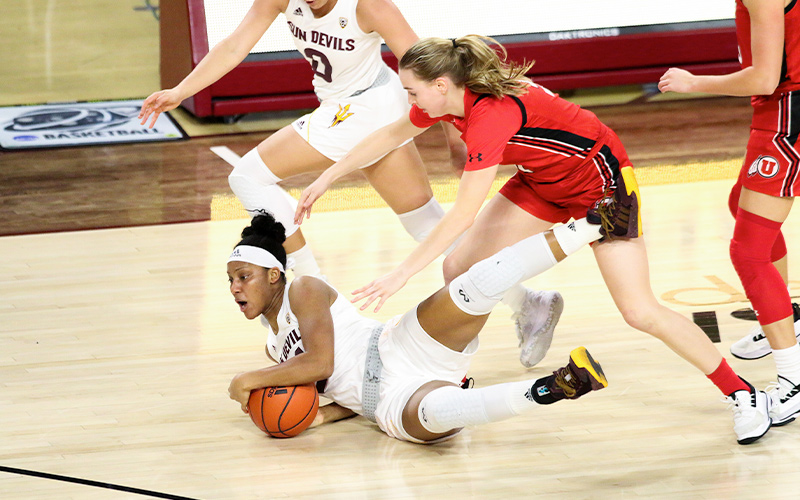 Although the Arizona State women’s basketball team has had some stumbles, including canceled games and injuries, players including guard Sydnei Caldwell are ready to make a run for the NCAA Tournament. (Photo by Marlee Smith/Cronkite News)

TEMPE – Nobody said playing sports during a global pandemic would be easy. For Charli Turner Thorne and the Arizona State women’s basketball team, navigating a season in the COVID-19 world has been a grind.

“Challenging is not a strong enough word for what we’re all experiencing and trying to meet the standards we’re used to with our program,” Turner Thorne said.

Turner Thorne’s players are used to winning and playing at a high level, but this season hasn’t gone as they had hoped. Before their game against UCLA on January 29, the Sun Devils had not played a single game this season with the full roster at Turner Thorne’s disposal due to injuries and players being lost to COVID protocols.

Despite the challenges, the Sun Devils have managed to put together a 9-6 record but are 4-6 in a Pac-12 Conference that features some of the heavyweights in the sport, including UCLA, Stanford and Oregon.

Perspective has been a key to navigating a tough situation the Sun Devils have been faced with all season.

“One thing my staff, myself included, do really well is to keep things in perspective,” Turner Thorne said. “We have high standards here but we didn’t get to train the way we normally train. We haven’t had our whole team the entire year.”

It’s no secret that this edition of the Sun Devils is a young group. Bre’yanna Sanders is the lone senior and there are no returning starters from last season’s squad. With such a young and inexperienced lineup, game reps are a key to growth and maturity. Having seven games postponed so far this season has only hurt that process.

“Going two weeks without a game is really hard in any situation,” Turner Thorne said. “When we’ve already missed games for this young of a team, we need game experience. We can’t simulate any of this in practice.”

Turner Thorne has no doubts that her team will only get better with time and the players are highly motivated to make that so.

“We’re going to get better every game and every week of the season,” Turner Thorne said. “We have some really motivated and talented young women who want to win.”

One constant for the Sun Devils has been their effort level each time they take the court. It would be easy for any team this young and inexperienced to put their heads down when something isn’t going their way. That’s not the case for this team.

“I really appreciate everyone’s effort, going all out,” freshman guard Jaddan Simmons said after her team’s near comeback against UCLA. “No matter what the score is, we’re always giving 100%.” 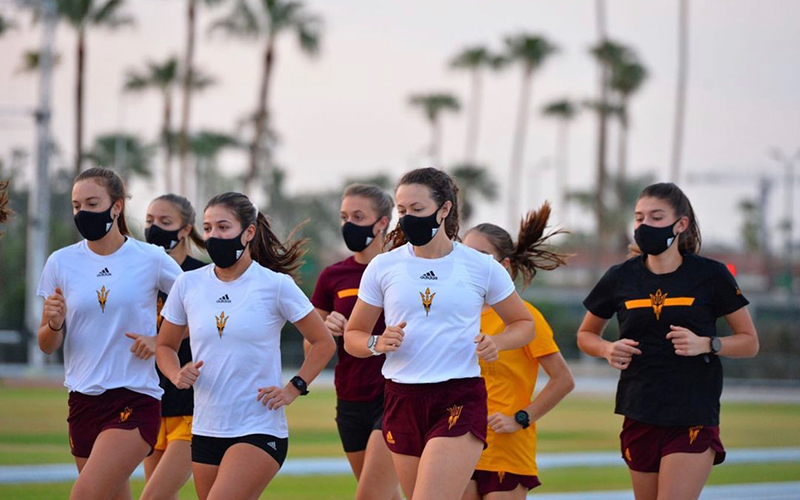 In their 60-57 loss at UCLA, the Sun Devils continued a theme that has plagued them all season — slow starts. After 10 minutes of play, the Sun Devils had amassed all of six points and trailed by 13. In the final three quarters, the Sun Devils found their rhythm and were able to take leads in the third and fourth quarters before eventually falling to the then fifth-ranked Bruins.

“We don’t like to have excuses in our program,” junior guard Taya Hanson said. “We know we need to work harder off the bat and stick to our gameplan.”

Despite the slow starts to games, the Sun Devils have been excellent at coming back and finishing games, a quality rarely seen in a team that is so young. Starting slow but finishing strong is better than the alternative, but the Sun Devils know they need to get it going early to succeed in the long run.

“I’ve been doing this a long time and I don’t know that I’ve had a team that’s been so consistent with slow starts,” Turner Thorne said. “It’s been amazing how well they finish for such a young group … I’m glad we keep finishing strong, but we need to start stronger the rest of the year.”

The Sun Devils know how important playing as a team and feeding off each other will be down the stretch. Each player has a role and they know that their execution of that role can make or break this final leg of the season.

“We need everyone to step up and hit shots and make big plays throughout the game,” Hanson said. “It definitely boosts me up seeing my teammates do well.”

The Sun Devils will continue to make their run at the NCAA tournament this weekend as they host Washington and Washington State on Friday night and Sunday afternoon, respectively.

Finally playing at full strength and gaining valuable experience on the court will only make this Sun Devil team better. After their near comeback on the road against the fifth-ranked Bruins, Turner Thorne saw how dangerous her team can be if they continue to play the right way down the stretch.

“They know that they can beat anybody they play,” she said.