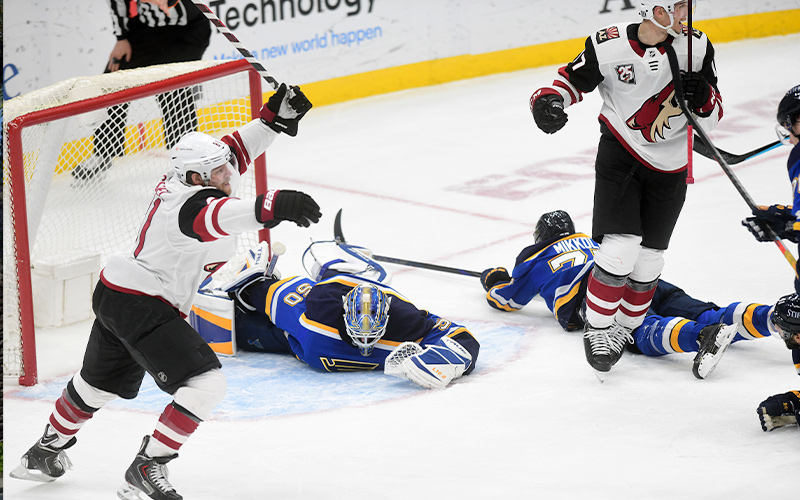 Even though they have been playing scheduling roulette lately, the road has been kind to the Arizona Coyotes. They have won three straight against St. Louis on the road, including Monday’s game when Clayton Keller scored the tying goal with one second remaining, leading to a Coyotes shootout win. (Photo by Keith Gillett/Icon Sportswire via Getty Images)

GLENDALE – The St. Louis Blues are no pushover of a team. They’ve made the playoffs in all but one season since 2012, and won the Stanley Cup just two years ago.

Beating the Blues on their home ice once is difficult enough. Beating them in three games out of four at the Enterprise Center is a lot to ask of any team. But that’s what the Coyotes pulled off last week, thanks in part to the havoc COVID-19 is playing on the NHL schedule.

And they haven’t seen the last of the Blues. Not by a long slap shot.

The Blues come to Arizona for another three games over four days beginning Friday at Gila River Arena. To make it a three-game set, the NHL added a game onto a scheduled two-game series in the Valley, pitting these two teams against each other seven times in 13 days.

Coyotes coach Rick Tocchet knew that scheduling during a pandemic would be challenging. The Coyotes coach had a weekend to prepare for his team’s first long road tour, which turned out to be a one-stop trip.

Arizona was scheduled to play in St. Louis, Minnesota and Colorado to open the month of February before finally heading home to the Valley on the 13th. Arizona had played two games in Las Vegas from Jan. 18-20, a trip that gave his team a much needed taste of what playing away from home during a pandemic would look like.

The Wild and Avalanche, after playing against each other on Feb. 3, both had their seasons temporarily shutdown the next day due to COVID-19 complications. Nine players on the Wild were placed on the NHL’s COVID-19 protocols list and deemed ineligible to play while three Avalanche players also landed on the list.

With the Minnesota and Colorado games postponed due to the outbreak, the NHL added additional games in St. Louis to the Coyotes schedule, their first road games since they played two games in Las Vegas in January.

But before they knew it, Arizona’s scheduled three-stop road trip stalled in St. Louis, and the Coyotes remained there.

“It’s definitely different,” Coyotes defenseman Jakob Chychrun said of the experience of playing on the road during a pandemic. “Some of the best memories over the years was going to dinners on the road and just being on the road with the guys. Obviously, you just can’t do much of anything anymore.

“They’re giving us everything they can to keep us from going crazy in our rooms.”

Still, the Coyotes were facing the prospect of an eight-day layoff before the NHL threw them a lifeline.

The Blues were also in need of new games because they were scheduled to play the Avalanche during the weekend and then the Wild last week. So the league rescheduled Arizona and the Blues’ next matchup in St. Louis to that upcoming Saturday and Monday to fill the void in their schedules, meaning that the Coyotes would remain in the Midwest for eight straight days since they had departed from Phoenix on Monday.

When the Coyotes weren’t at the arena, they were mostly restricted to their hotel in St. Louis.

Going out to get a bite to eat out in the city wasn’t an option. Even a quick visit to see the Gateway Arch was frowned upon.

“I think that’s what a lot of teams are trying to figure out. What’s the best way to approach the road trip, especially with the protocols?” Tocchet said. “We’ve got to think of ways to get energized on the road.”

This was especially strange for Coyotes forward Clayton Keller.

A native of St. Louis, Keller was used to visiting with friends and family whenever the Coyotes were in town to play the Blues. He was also a frequent attendee at Blues games while growing up in the area.

“My family had season tickets, so I kind of went to every single (game),” Keller said. 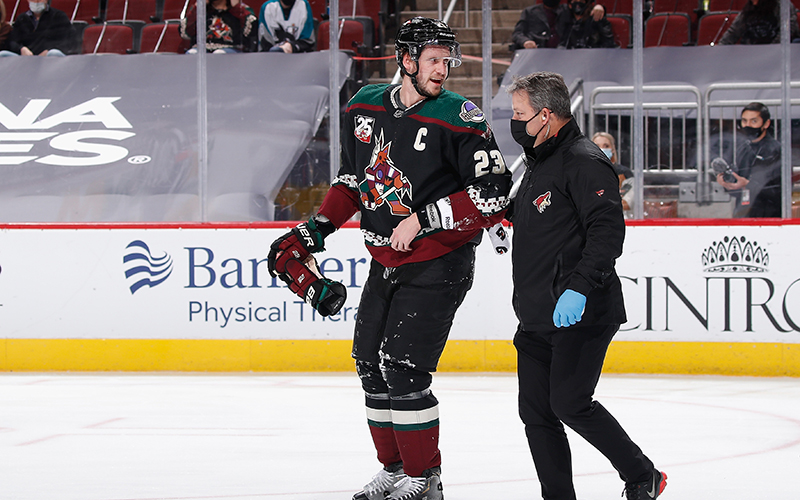 Yet, Keller couldn’t visit family and friends from his hometown despite being there for more than a week. It’s a situation that the Arizona forward never imagined.

But that didn’t stop Keller from putting on a show for the hometown. In fact, the Coyotes forward snapped an eight-game goalless streak on the trip and was the hero of the final game of the series there, scoring the game-tying goal with under a second left to play.

“It was definitely cutting it close,” Keller said of the game-tying goal in regulation.

While on the road this season, the Coyotes have been afforded a banquet room at the hotel for team functions. The room, as Tocchet suggested before the Coyotes’ trip, can be used for a variety of activities to help keep the players mentally sharp.

“We’ve just got to be more creative. Maybe we have a movie night. Maybe we have an inspirational film we show the guys. Maybe we have some guys do some kinds of skits,” Tocchet said prior to Arizona’s road trip. “We’ve talked about a whole bunch of different things.”

Other mental exercises that Tocchet mentioned were team game film reviews, where the players run the sessions instead of the coaches. He also said that ping pong tables and card tables were present at the team hotels.

“As much as you want them to be physically active, you’ve got to keep them mentally active,” Tocchet said. “Sitting in a hotel for four days at a time, it can get stale.

“Who wants to sit in your room by yourself with four walls?”

The Coyotes haven’t played a game at Gila River Arena this month, so it’s safe to say that the team is happy to be back home, even if it is against St. Louis again.

The road trip was tough enough.