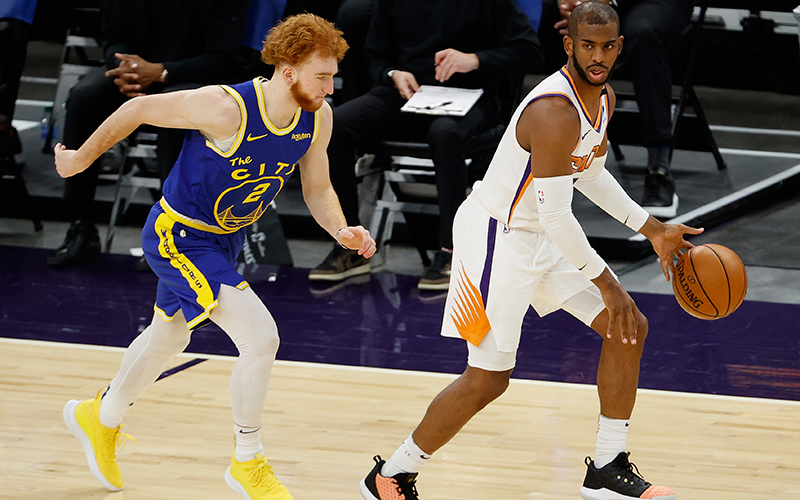 PHOENIX – Almost a year has passed since Nico Mannion last started and played a full basketball game. March 11, 2020, to be exact – his final game of his one-year college career at Arizona before COVID-19 shut down the rest of the college basketball season.

After being drafted in the second round by the Golden State Warriors in November and signing a two-way contract, the former Pinnacle standout and Arizona Wildcats guard has received limited amounts of playing time in six games with the Warriors so far, averaging six minutes a game, 1.5 points and 2.0 assists.

“Nico has shown me he belongs on an NBA court,” Kerr said on 95.7 The Game. “That guy can pass and he can defend. Now we need to see him shoot with volume in Orlando. I want him to shoot 12-15 shots a game. I want him to let it fly because that’s going to be the next step for him at this level.”

Santa Cruz is scheduled to play 15 games from Wednesday to March 6 and the top eight teams will advance to a single-elimination playoff bracket.

Mannion told local media he is satisfied with his role right now with the Warriors.

The NBA GLeague will host a bubble down in Orlando at the same site where the NBA bubble was last year. The Santa Cruz Warriors are among the 18 teams that will compete.

The Dubs will chat with Nico Mannion today to discuss his participation in said bubble. @kron4news pic.twitter.com/zKpAwPkUNs

To Nico’s father and six-year NBA veteran, the trip to Florida is exactly what Nico needs to improve.

“This is the best thing that could happen,” said Pace Mannion, who was drafted by the Warriors in 1983. “Obviously, nobody wants their goal to be to play in the G League. Their goal is to play in the NBA. For Nico, he hasn’t played a game in almost a year. … He’s never really played a full game or any meaningful minutes where you go and play 25-30, 30-35 minutes in a game since the last game where they beat Washington in the Pac-12 Tournament in the first round. For him, he’s looking forward to getting out on the floor and playing 30-plus minutes.”

A five-star recruit coming out of Pinnacle High School, Mannion has demonstrated abilities to distribute the ball and play quality defense at the NBA level, skills he has displayed since his high school days. At one point in January, he totaled four assists each in two consecutive games.

However, the elder Mannion wants to see Nico put the ball in the basket more often as his son is shooting 3 of 13 from the field so far this season.

“The biggest thing he needs to do right now is prove he can score the basketball,” Pace Mannion said. “I think (the Warriors) want to make sure he is shooting it at a decent percentage. This stretch in the bubble will do that. He’s worked hard with the long layoff before the draft. He shot it well.

“(Steve) Kerr told him, ‘I want you to play like you played in high school. You’re a playmaker. Go make plays whether it’s for yourself or for somebody else.’”

Charlie Wilde, Nico’s high school coach at Pinnacle, thinks he is noticing the increased difficulty of the NBA game.

“He realizes it’s harder,” said Wilde, who coached Mannion from 2016-2019. “From high school to college, they expected more from you. Now he’s getting paid to play the game he loves. They’re expecting more. He’s a 19-year old kid playing a game and traveling all over the world. I think there’s a little shock there but it’s something he’s always loved to do and I think he’s getting better.”

While Nico has yet to receive many meaningful minutes to the start of his career, he scored a season-high eight points against the Utah Jazz on January 23, including his first NBA three in front of his father and family in Salt Lake City. The Jazz are one of eleven teams in the league to permit fans in a limited capacity.

Nico Mannion sinks his first career 3 with his family in attendance 🤩 pic.twitter.com/fxj5jxjW57

“It was great,” Pace Mannion said. “I was lucky enough to be down there. We were down there for business and some other reasons but we tried to plan it around that trip so maybe we could even get to see him, not worry about the game, but at least spend some time with him.

“They got in late and we didn’t get to see him at all before the game. But then he played and he had a really nice run out there. It was fun and we got to talk to him after the game.”

Both Nico’s father and coach are proud of the way he has handled himself so far in the pros as they both get ready to watch him in the G League.

“You’re proud of any of your kids who have made it that far,” Wilde said. “I’m super proud of him. I went out and bought my own Golden State shirt so I can wear that around and show everybody how proud I am. You’re just excited for him especially because many times we have talked about it and he’s there. He’s doing what he wanted to do. Not many people can say that.”

Added Pace: “He’s handled this better than I thought. He’s been very humble through it all. He’s worked hard. He’s learned. He’s listened to the coaches on what they want from him and tried to do that. He has listened to the veterans. He’s got a lot of good vets on that team who are very knowledgeable, willing to share and like Nico and want him to succeed.”

The Santa Cruz Warriors will begin their season against NBA G League Ignite on Wednesday with tipoff scheduled for 9:00 a.m MST on ESPN2.