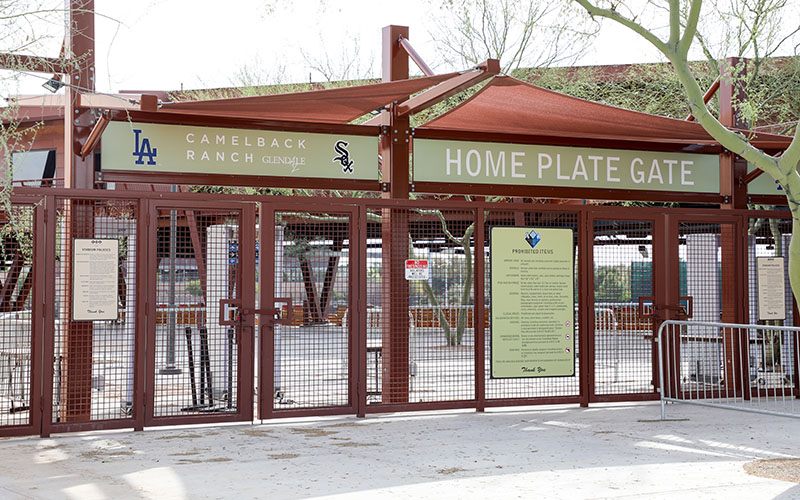 A recording at Camelback Ranch said ticket sales for spring training are undetermined at this point. (Photo by Alina Nelson/Cronkite News)

PHOENIX – With Major League Baseball pitchers and catchers expected to report in two weeks, Cactus League teams are scrambling to determine what spring training will look like for fans in 2021.

The league announced on Monday night that it is preparing for an on-time start to spring training and Opening Day as originally scheduled after the Players Association rejected the league’s proposal to delay the start of both by a month.

All 15 Cactus League teams have yet to offer spring training tickets for upcoming games on their team websites, and a recording at Camelback Ranch, the home of the Los Angeles Dodgers and the Chicago White Sox, said ticket sales “are undetermined at this time.” The Chicago Cubs did send an email to Sloan Park season ticket holders that said they were “shifting to limited, socially distanced pod-style seating” for the 2021 season.

Peoria Mayor Cathy Carlat is optimistic a plan will be established sooner rather than later.

Decisions will be left up to municipalities, and teams could have different protocol when it comes to seating and capacity of the stadium.

They must also figure out issues related to health protocol, food safety and housing for players.

Major League Baseball had hoped to have more time to decide.

“On the advice of medical experts, we proposed a one-month delay to the start of Spring Training and the regular season to better protect the health and safety of players and support staff,” MLB said in a statement. “A delay of the season would allow for the level of COVID-19 infection rates to decrease and additional time for the distribution of vaccinations, as well as minimizing potential disruptions to the 2021 season that currently face all sports.”

MLB’s proposal included the postponement of Opening Day to April 29, a 154-game schedule and a full payment of player salaries as if it were a 162-game season.

The Player’s Association released a statement on Monday evening as well.

“Although Player salaries would not be initially prorated to a 154-game regular season, MLB’s proposal offers no salary or service time protections in the event of further delays, interruptions, or cancellation of the season,” the statement read. “The clear-cut result of these deliberations is that Players will not accept MLB’s proposal, will instead continue preparations for an on-time start to the 2021 season, and will accept MLB’s commitment to again direct its Clubs to prepare for an on-time start.”

Spring training camps are set to open on February 17. Opening Day is scheduled for April 1 and a 162-game season will remain.

“In light of the MLBPA’s rejection of our proposal, and their refusal to counter our revised offer this afternoon, we are moving forward and instructing our Clubs to report for an on-time start to Spring Training and the Championship Season, subject to reaching an agreement on health and safety protocols,” MLB said.

The Cactus League wrote a letter to MLB commissioner Rob Manfred on January 22 asking for a delay to the start of Spring Training due to high COVID-19 infection rates.

The Arizona Department of Health Services Wednesday reported 2,296 new cases of COVID-19, including 1,328 new cases in Maricopa County, which is an improvement after announcing 5,321 new cases about a week ago on January 25. The department also reported a rate of 11,000 new case counts per 100,000 population.

“We’re hopeful that there will be fans in the stands, but again, it changes all the time,” Cactus League executive director Bridget Binsbacher told Cronkite News on January 25. “We’re moving in the right direction and so we’re just trying to be as optimistic and ready for whatever comes our way.”