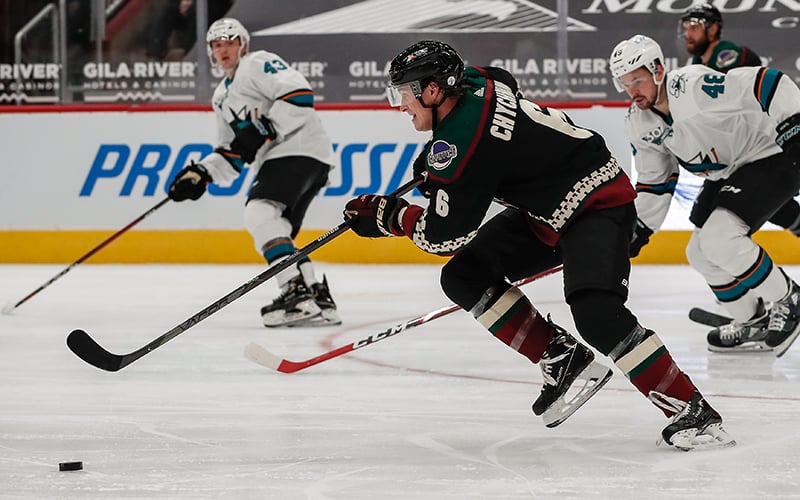 Arizona Coyotes defenseman Jakob Chychrun says there was a “noticeable difference” to the feeling of the pucks with embedded tracking technology. (Photo by Kevin Abele/Getty Images)

A condensed, series-based schedule. Realigned divisional play. And games with limited fan attendance are a few of the twists and turns the league has maneuvered amid the COVID-19 pandemic.

Now, another wrinkle has been added to the mix.

Just six days into the season, the NHL pulled microchipped pucks players and coaches around the league complained about the way the pucks performed.

The league released a statement on Jan. 19 outlining its decision to recall pucks with embedded tracking-chip technology.

This is the first complete season of puck tracking for the NHL, which hopes to supply more data to player performance, such as player skating speed and puck possession time. Last year’s conference finals in the league’s Return to Play plan marked the first time the league adopted puck tracking.

A review discovered that the first batch of 2020-21 pucks did not receive the exact finishing touches during the off-season manufacturing process as those that were used during the 2020 Stanley Cup Playoffs, according to the NHL.

It came as no surprise to Arizona Coyotes coach Rick Tocchet, who had heard chatter from his players about the microchipped pucks during the team’s first series of the season against the San Jose Sharks at Gila River Arena.

“I heard some puck bouncing and some different feels to that puck,” Tocchet said. “I think it was after Game 2 (vs. San Jose). I heard some whispers from some players talking amongst themselves that said it’s a little different puck feel with the tracking thing. For sure, I heard that.”

Coyotes veteran defenseman Jakob Chychrun immediately noticed the puck was a little off within his first few shifts of the home opener.

“There was a noticeable difference,” Chyrchun said. “I even had a little talk with the refs in our first game of the year at home. I just asked them, ‘What was going on?’ The refs said the pucks were different. It was definitely noticeable, just feeling them and the way they were sliding on the ice.”

Chychrun initially thought the puck’s different feel was due to the new ice surface, which was installed on Dec. 23 with a crescent moon logo to commemorate the Coyotes’ 25th anniversary.

Nevertheless, there was no doubt the puck-tracking technology had some players scratching their heads, leading to discussions on the bench and in the locker room.

“There were a lot of talks about it,” said Chychrun, who has tallied a goal and five points through the first six games of the season. “Guys were complaining. It was definitely noticeable, feeling them and the way they were sliding on the ice. It’s nice to go back to the regular ones.”

Coyotes forward Derick Brassard noticed a slight difference the first game, but noted he was still getting used to the rink atmosphere at Gila River Arena in his first season as a Coyote.

Toronto Maple Leafs star Auston Matthews, who grew up in Scottsdale, said the pucks with the chip technology didn’t seem to slide as well as the regular ones. Matthews and his teammates compared them and found the weight to be uneven, according to Sportsnet’s Chris Johnston.

Another NHL player told ESPN’s Greg Wyshynski that the pucks were “terrible” and “don’t slide.”

“When you see some of the best players bobbling pucks, it’s a problem,” Vegas Golden Knights forward Ryan Reaves told Ryan Wallis of Fox Sports Las Vegas. Amid the transition of regulated pucks, the Coyotes wrapped up a four-game series with the Golden Knights in which Vegas took three of four. The Coyotes now hold a 2-3-1 record, which represents the eighth spot in the Honda West Division.

The Coyotes knew there would be hurdles during this unusual season. Whether it’s the persistent COVID-19 protocols or the atypical travel and practice schedules or a new batch of pucks, Tocchet has been firm in his belief since the first day of training camp that his team will battle through the challenges.

The microchipped pucks won’t be gone for long.

“I view this more of an evolution than a revolution,” NHL Deputy Commissioner Bill Daly said in a Q&A session with NHL.com senior writer Dan Rosen on Jan. 21. “I do think we’ll continue to integrate the tracking data into the presentation of our games in various ways and I think that integration will continue to ramp up over time.”

The NHL expects a new supply of pucks with tracking chips to be available soon and, following adequate quality control testing, will return for the rest of the season.