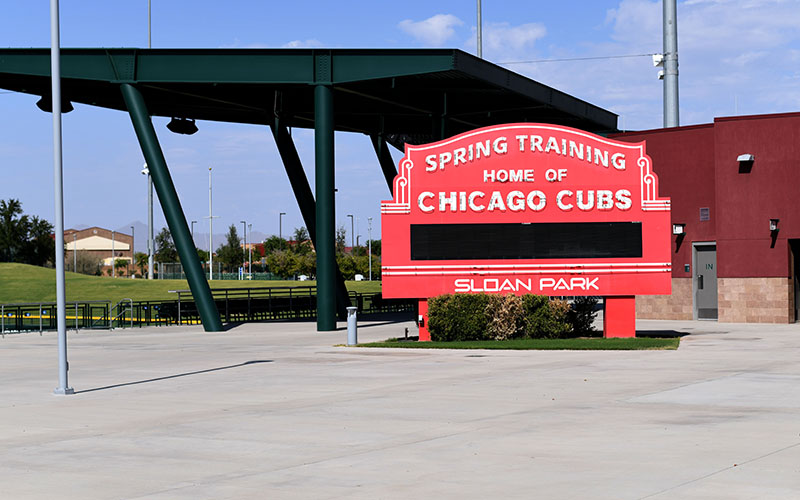 Although the start of spring training may be delayed, the Chicago Cubs have sent emails to season-ticket holders at Sloan Park in Mesa that the club is shifting to limited, socially distanced pod-style seating for their games. (File photo by Kevin Hurley/Cronkite News)

PHOENIX – The Cactus League has asked Major League Baseball (MLB) to delay the start of spring training in Arizona due to high COVID-19 infection rates in Maricopa County. The request came in a letter addressed to MLB commissioner Rob Manfred.

“In view of the current state of the pandemic in Maricopa County – with one of the nation’s highest infection rates – we believe it is wise to delay the start of spring training to allow for the COVID-19 situation to improve here,” the letter sent on Friday said.

The board’s decision is “based off data from the University of Washington’s Institute for Health Metrics and Evaluation, which projects a sharp decline in infections in Arizona by mid-March (an estimated 9,712 daily infections on February 15 and 3,072 daily infections on March 15),” the letter stated.

According to the Arizona Department of Health Services, the state of Arizona has over 727,000 reported cases of COVID-19, with 5,321 new cases reported Monday.

The letter is signed by Bridget Binsbacher, the executive director of the Cactus League; Martin Harvier, the Salt River Pima-Maricopa Indian Community President; the city managers of Phoenix and Tempe; and the mayors of Mesa, Surprise, Peoria, Scottsdale, Goodyear and Glendale.

“We just wanted to let MLB know that if there was any opportunity to postpone the season that we collectively, as the host cities, the host municipalities, and the tribal community, would support that,” Binsbacher said. “What really inspired that letter was it allows for additional time for the situation to improve and certainly we’re seeing, even since the thought of that letter, the situation has improved and we’re trending in the right direction.”

“While we, of course, share the goals of a safe Spring Training and regular season, MLB has repeatedly assured us that it has instructed its teams to be prepared for an on time start to Spring Training and the Regular Season and we continue to devote all our efforts to making sure that that takes place as safely as possible,” the statement said.

If spring training were to be delayed, MLB would not be able to make this decision unilaterally. It would have to reach an agreement with the Players Association, which has been adamant about starting spring training on time.

Binsbacher made it clear that the Cactus League is “not part of those discussions” between MLB and the Players Association.

Manfred told teams on January 11 to plan for the start of spring training and the regular season to be on time, USA TODAY reported.

Cactus League spring training is scheduled to begin on February 27 hosted by 10 facilities and complexes. Pitchers and catchers traditionally report about two weeks beforehand, although teams have yet to announce their spring training schedules for this year.

Whenever it starts, it will look different because of restrictions prompted by the COVID-19 pandemic. The Chicago Cubs sent out an email Friday that said it will not be able to offer spring training season-ticket holders their same seat locations for the 2021 season.

“As part of updated guidance from MLB and in coordination with requirements and guidelines, we are shifting to limited, socially distanced pod-style seating.”

Asked if no fans in attendance could be an option for Cactus League games this season, Binsbacher said “that is a possibility.” However, she is hopeful for a pod-seating concept for all facilities.

“This pod seating concept, it works,” Binsbacher said. “You can sell tickets in small groups and structure them so that they’re not close together. You can meet all of the CDC guidelines and maintain social distancing and manage traffic patterns.

“It can be done. We’re hopeful that there will be fans in the stands, but again, it changes all the time. We’re moving in the right direction and so we’re just trying to be as optimistic and ready for whatever comes our way.”

Peoria Mayor Cathy Carlat believes more time will improve the chances that some fans will attend.

“Baseball is America’s favorite pastime and spring training cities have an obligation to baseball fans to assure a safe environment for their enjoyment,” Carlat said in a statement to Cronkite News. “With the Cactus League and spring training cities working in collaboration with MLB, a delay in the season allows us a greater chance to make progress in the fight against Covid-19 and plan for a safe experience for fans.”

If infection rates in Maricopa County show no sign of improvement and the Cactus League were to be canceled, Mesa Mayor John Giles says it would have a detrimental effect on the local economy.

The Cactus League generated approximately $363 million in economic last season before COVID-19 shut down the season on March 12, the league said.

“Every year, we experience a tremendous boon in our local economy because of spring training,” Giles said. “Last year, we saw the impact of terminating the spring training season early and it did have a significant detrimental economic impact on the community.

“Certainly this year is not going to be a normal year. No one is suggesting that we return to business as usual but I think we are all stating the obvious of the longer we wait, hopefully, the better the situation is going to be for considering including fans.”

While Binsbacher awaits a response from Manfred and MLB, she and the Cactus League executive board are optimistic for spring training this year.

“I believe we’re going to recover because of everything that’s happening right now,” Binsbacher said. “There’s light at the end of the tunnel and whether that’s two weeks or four weeks or six weeks is again, completely out of our control and something that has to be negotiated between MLB and the Players Association.”