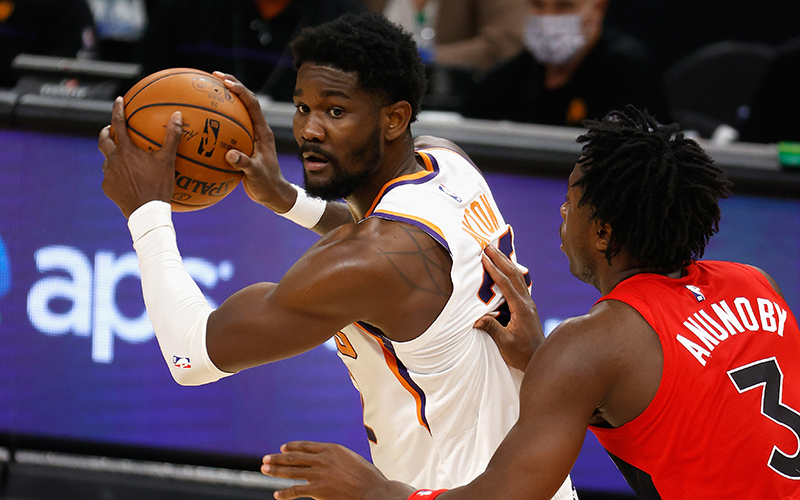 When Deandre Ayton heard the Phoenix Suns were last in the NBA in points in the paint, it motivated him. (Photo by Christian Petersen/Getty Images)

PHOENIX – In the midst of a week in which three of his team’s games were postponed in accordance with the NBA’s health and safety protocols, Phoenix Suns center Deandre Ayton overheard a statistic from coach Monty Williams that particularly unsettled him.

“Coach made a valid point that I think we were last in points in the paint in the league,” Ayton said. “So that opened my eyes up a little bit.”

Through his team’s first 11 games, Ayton was effective with his statistical output, averaging a double-double at 12.5 points and 11.3 rebounds per game on 56.6 percent shooting. But as a former No. 1 NBA Draft pick in his third season with a group that has high expectations to qualify for its first playoff berth since the 2009-10 season, Ayton can no longer be just sufficient in the eyes of his coaches and teammates. He has to be dominant.

In the Suns’ first two games against the Memphis Grizzlies and Houston Rockets this week, Ayton took charge of that demand and controlled the interior on both ends of the floor. He averaged 22.0 points and 16.5 rebounds while shooting a combined 18-of-29 (62.1 percent from the field) in those contests and became Phoenix’s second player outside of Shawn Marion to post at least 25 points, 15 rebounds and five blocks in the last 30 seasons during its 109-103 win over Houston on Wednesday night.

Potential has never been a concern for Ayton, who was compared to former San Antonio Spurs Hall of Fame center David Robinson when he entered the league and posted the highest field-goal percentage (58.3 percent) by a rookie averaging a double-double during the 2018-19 season. However, there have been questions about Ayton’s desire and maturity, as he was suspended 25 games last year for violating the terms of the NBA/NBPA Anti-Drug Program by testing positive for a diuretic and did not start during one of their eight contests in the NBA restart in Orlando, after missing a mandatory COVID-19 test.

At a listed 6-foot-11 and 250 pounds with a broad offensive skill set, Ayton has been continuously encouraged by his team to assert himself more often. By way of multiple pick-and-roll actions and pursuits off the offensive glass, Ayton did so in his last two games, attempting 14 and 15 shots, respectively, against Memphis and Houston, which were his two highest totals of the season.

“That’s all he’s been hearing for the last week about being more ferocious in the paint, from me, his teammates,” Williams said after the Suns’ 108-104 loss to the Grizzlies. “I’m sure he hears it from his friends. He’s so talented, so big and strong, we feel like he can dominate in that way.”

In both games, Ayton had impressive plays that demonstrated his versatility as a modern center. Against the Grizzlies, he spun toward the baseline while matched up on the low block against Xavier Tillman and threw down a reverse one-handed dunk, causing point guard Jevon Carter to jump and scream from the Suns bench. In the second quarter against the Rockets, Ayton caught an inbound pass and drove straight to the paint to finish with a finger roll over the outstretched arms of Houston guard Mason Jones, a move that is rare for players his size.

Overall, Ayton did not back down from opportunities to score when he had them. He faced a number of defensive challenges this week, including Memphis’ switches on ball screens and Houston’s differing styles with centers Christian Wood and DeMarcus Cousins as his matchup, but was the aggressor in each scenario.

26 points.
17 boards.
Career-high 5 blocks.
11-15 shooting.@DeandreAyton does it ALL to lift @Suns. #WeAreTheValleypic.twitter.com/V6ws2QGK4U

“I’m going to keep challenging him to do that,” said point guard Chris Paul of Ayton following the Suns’ game against Memphis. “I think everybody on our team is so hard on him because we know what he’s capable of. To be one of the greats in our league, you just have to have consistency and he’s more than capable of it.”

Perhaps more than his offensive output, Williams said Ayton’s teammates were especially pleased with his defensive performance against Houston on Wednesday. He recorded a career-high five blocks against the Rockets and was able to move well against their guards and limit the output of Wood, a potential candidate for the NBA’s Most Improved Player, by forcing him to tie a season low of 8-of-18 shooting (44 percent).

Phoenix backup point guard Cameron Payne said Ayton’s presence as a defensive anchor has helped build trust in its execution on that end.

“Tonight, man, [Ayton] cleaned up everything,” Payne said Wednesday. “It was huge for us, just to know he was back there taking care of the dirty work. It’s huge for us, and if he can keep it up which I’m pretty sure he will, I feel like it’ll put us in a good situation every game.”

With an 8-5 record, the Suns currently rank fourth in the Western Conference behind the Los Angeles Clippers (11-4), Los Angeles Lakers (11-4) and Utah Jazz (10-4). They face the Denver Nuggets, who are 7-7, on Friday and Saturday at home. 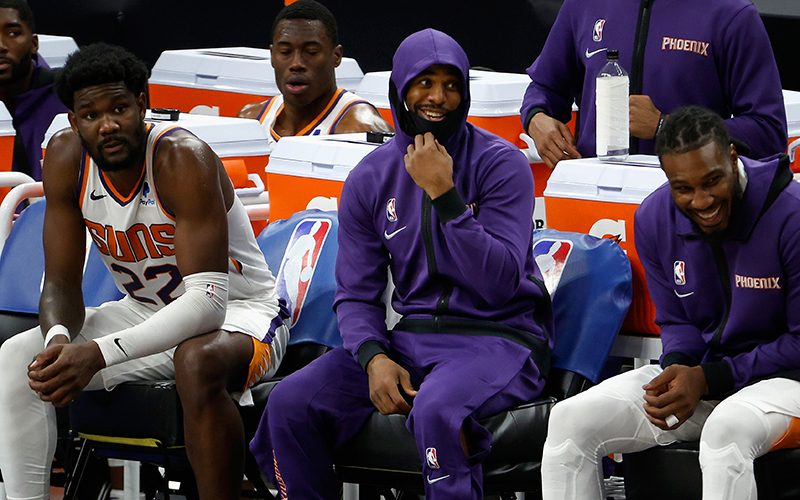 No fans, no vaccine, no problem: It’s not ideal but Suns excited to showcase new look

In those games, Phoenix hopes to build on its chemistry and ability to close out games, as it lost a late fourth-quarter lead against Memphis and nearly squandered a 20-point second-half advantage versus Houston. Ayton’s two-game stretch was a positive trend for the season, but he and his teammates are not satisfied with it.

“Since I’ve been in the league, I’ve been waiting for this type of pressure man,” Ayton said. “I needed some pressure on my shoulders, I needed to feel something and I love it. I love to feel like everybody’s depending on me, I love it. It just makes be that player I’m supposed to be every night and not thinking, not overthinking, just playing and playing the best that I can.”

Added Suns guard Devin Booker: “I want to see more. I want to see more, and that’s what I told him. There’s probably quotes from early on in his rookie season where I’ve told him, ‘16 (points) and 10 (rebounds) is cool. It’s cool, but I see 30 and 20 out of you.’ I think he’s turning that page, like I said. I don’t want to keep talking him up, but he has to keep playing and he understands that.”

Looking to overcome slow offensive starts from performances prior to its three postponed games, Phoenix made a change in its starting lineup on Monday by swapping second-year forward Cameron Johnson for Jae Crowder. According to Williams, the Suns wanted to use Johnson’s ability to cut to the basket and run in transition to open up their spacing offensively.

“I think it’s a lineup that’s going to take some time but I keep saying that we haven’t identified the way we have to play consistently,” Williams said. “And we see it in spurts and I’m hopeful that that lineup with Cam out there with his cutting and ability to space the floor will help that starting unit.”

Johnson finished with 10 points, four rebounds and three assists on 4-of-9 shooting against the Grizzlies in 23 minutes, and eight points, three assists, three rebounds and two steals versus the Rockets while shooting 3-of-9 from the field in 28 minutes played.
Phoenix elected to play Crowder, who had five points, five assists and two rebounds in 27 minutes played against Memphis and 11 points and five rebounds versus Houston, in the final minutes of its game against the Grizzlies and staggered him and Johnson in the fourth quarter against the Rockets.

“I like it both ways,” Williams said. “I like Jae in the second group, he’s a steadying force for that group but having Cam out there in the first group, the pace, the speed, the spacing. Trying to tap into some of the action we had in Orlando, he was in the starting group. I think it’s only going to grow when we get (Suns forward) Dario (Saric) back.”

Johnson told reporters following Wednesday’s shootaround that he was informed of his role change by Williams last week and that he hopes to bring energy toward it in the future.

“Getting up and down, getting up in transition and bringing that energy, kind of like that energy we saw in the bubble a little bit,” Johnson said. “Bringing that to the start of games and trying to get off hot.”