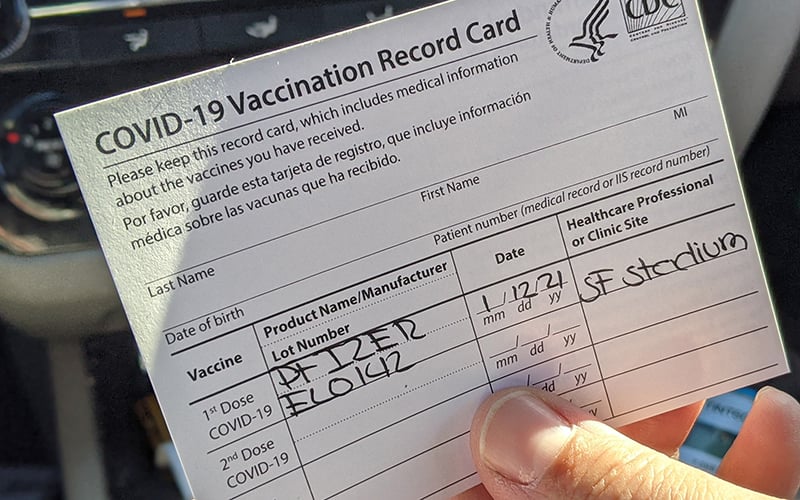 A card given to those who got the Pfizer COVID-19 vaccine at State Farm Stadium. The Pfizer vaccine requires a second dose several weeks after the first. (Photo courtesy of Sky Schaudt/KJZZ) 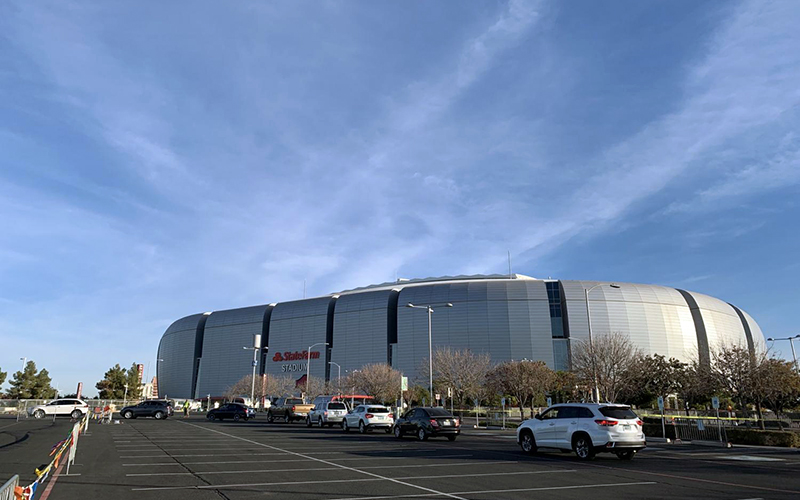 Vehicles enter a parking lot outside State Farm Stadium in Glendale on Wednesday. Starting next week, Arizonans 65 or older will be eligible for vaccination as the state scrambles to increase the pace of the rollout. (Photo courtesy of Katherine Davis-Young/KJZZ) 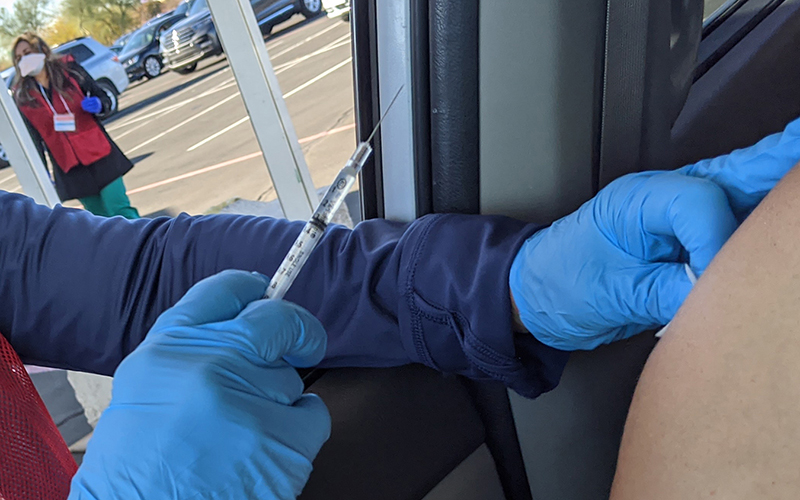 A worker prepares to administer the Pfizer COVID-19 vaccine at State Farm Stadium in Glendale on Tuesday. Recipients get their shots through a car window. (Photo courtesy of Sky Schaudt/KJZZ)

PHOENIX – Getting enough people vaccinated to stop the COVID-19 pandemic is a major logistical question. One strategy states are turning to is mass vaccination. In Arizona, that’s now happening around the clock at an NFL stadium.

Since 12:01 a.m. Tuesday, State Farm Stadium in Glendale – home to the NFL Arizona Cardinals – has been the site of thousands of drive-thru vaccine appointments. Several such sites have been operating in Arizona since mid-December, but this is the state’s first 24-hour drive-thru site.

Previously, vaccines had been available only to health care workers and people in long term care facilities. The launch of the State Farm Stadium site coincided with expansion of vaccine eligibility in Maricopa County to anyone 75 or older, law enforcement, childcare workers and school staff members. And on Tuesday, Arizona agreed to expand the priority group to include adults 65 and older and those with comorbidities.

At the State Farm site – which officials say will be able to vaccinate at least 6,000 people per day – cars have lined up by the hundreds at all hours of the day. People stay in their vehicles and receive their shot in the arm through the car window. Then they wait briefly in their cars, to check for allergic reactions, before driving home.

“It took about an hour, it was surprisingly well-organized, though,” said Charlie Jannetto, who teaches high school math. 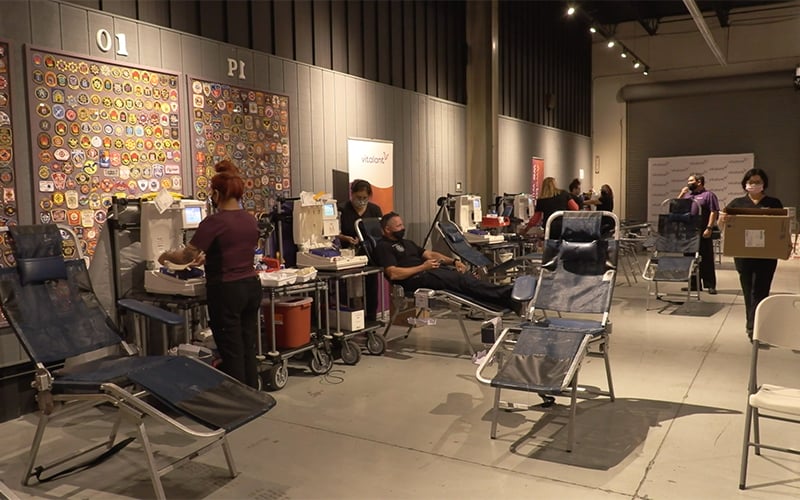 Jannetto was one of the first to get a shot when the stadium site opened this week for prioritized groups. He grabbed the earliest appointment slot he could get, which was just after midnight Tuesday.

“I’ve never done a late-night vaccine in the parking lot of a stadium before,” he said.

“We have never attempted to vaccinate the U.S. at the scale that we are now asking states to do,” said Dr. Jennifer Nuzzo with the Johns Hopkins Center for Health Security in Baltimore.

Nuzzo is one of the authors of a recent study looking at how prepared local public health departments are for mass vaccinations.

“When asked if you had to do this for the majority of your population in a short period of time, could you? None of them were really at that point,” she said.

It’s not just a matter of directing traffic for thousands of cars, Nuzzo said, it’s finding enough qualified personnel to administer the shots and manage appointment bookings. Not to mention reminding everyone they’ll need to go through this process again in a few weeks for a second dose.

Those are major obstacles. But Will Humble, the former director of Arizona’s Department of Health Services, said big vaccine drive-thrus are one of the only good options right now because these first approved vaccines are shipped in huge quantities that have to be kept cold and used quickly once opened.

“You’re boxed into using approaches that you don’t want to use because you’re stuck with the cold-chain requirements that the FDA authorized,” said Humble, who’s executive director of the Arizona Public Health Association. 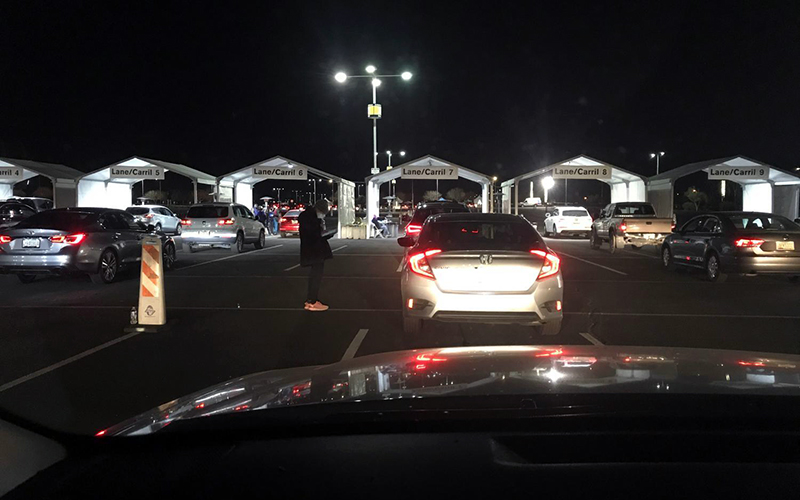 Arizona, like most states, started preparing for the vaccine months ago, but there have been setbacks. Online systems for required appointments have been overwhelmed. And vaccinations have not gone as fast as the state hoped. So far, Arizona has administered only about a third of the doses it has received.

“It hasn’t been optimal, but has been better than nothing,” Humble said.

Gov. Doug Ducey is eager to accelerate the process. The health department quickly organized the stadium site with the help of a million-dollar private grant and volunteers, but critics say Ducey has enacted few policies to mitigate Arizona’s severe outbreak.

And Humble worries even with Arizona’s big vaccine sites fully booked, it will be months before the state can outpace the coronavirus that COVID-19.

“The governor and our health director are just banking on vaccinating our way out of this,” Humble said. “But in the meantime, there’s just going to be a lot of dead bodies because those are the people that became infected.”

State leadership defends their focus on vaccines. Dr. Cara Christ, health department director, said Monday she hopes the 24/7 site will be the first of many in Arizona.

“This sets the stage for later this year when the challenge will be to get millions vaccinated to build herd immunity needed to defeat COVID-19,” Christ said.

Nuzzo said each new mass vaccination effort will bring more logistical challenges. But even with setbacks, she said, getting these sites running in Arizona and across the country is a significant step.

“Thinking about doing this at the scale we are attempting is extraordinary,” Nuzzo said.