By Harrison Campbell/Special for Cronkite News 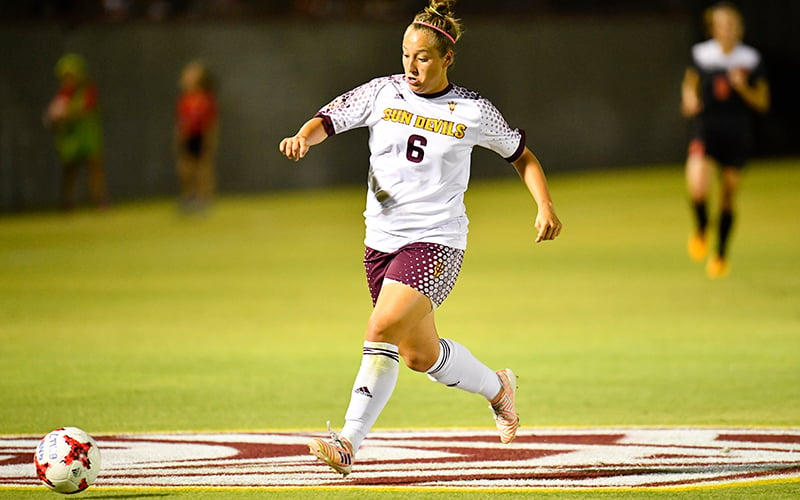 In Brazil, where ASU midfielder Lara Barbieri grew up, “everybody basically breathes soccer.” Barbieri has been stranded in Brazil since March. (Photo courtesy of Sun Devil Athletics)

PHOENIX – As the start of the Pac-12 women’s soccer season closes in, Arizona State is without veteran midfielder Lara Barbieri. The ASU senior is from Monte Mor, São Paulo, Brazil, where she has been stranded, unable to return to the United States because of the COVID-19 pandemic.

Barbieri has been in Brazil since March, when she flew home after spring break and ASU pivoted to remote learning. For nearly 10 months, she waited, hoping U.S. travel restrictions would be lifted so she could return to Tempe, her second home. They haven’t, but she may have found a solution: She plans to leave Brazil shortly, quarantine in Mexico and then enter the U.S. on Jan. 31.

There was a period of time where many thought a 2021 women’s college soccer season wouldn’t happen after it was postponed last fall. That changed when the NCAA announced in September that the season would begin Feb. 3.

Brazil has struggled with COVID-19. In June, its average of 1,000 deaths per day made it, along with the United States and India, one of the countries with the highest amount of deaths.

“We haven’t seen her since March when the coronavirus began. We’ve missed having her personality around the rest of the group and we look forward to hopefully her border opening up again … because she is a great teammate,” Winkworth said.

Barbieri’s home town is part of the metropolitan region of Campinas and has a population of about 55,000.

“Here everybody basically breathes soccer, it is like everyone is a soccer fan,” she said.

It is there where Barbieri got her beginnings in the sport, playing against boys.

She didn’t have much of a choice, however, as there were no girls teams for her age group. Barbieri played with boys her age until she was 13, when she joined a girls club team. By the time she was 15, she was playing professionally in Brazil.

Barbieri played for Associação Atlética Ponte Preta, a team in the second tier of Brazilian football. Founded in 1900, Ponte Preta is also the second oldest soccer club still active in the country. She also played for Ponte Preta’s crosstown rivals Guarani Futebol Clube, who are also in Brazil’s second tier, as well as Valinhos Futebol Clube. She was even called up to play on the U15 and U17 Brazilian national teams.

“It was a dream, it is what all athletes want, they all want to represent their country, so it was a dream to me and it keeps being a dream,” Barbieri said.

By 18, she decided it was time to take her talents to a college in the U.S. “I see an opportunity to play soccer at a high level and also study and get a degree,” she said.

“Lara was one that was actually found through an agency when I was at my previous institution at South Alabama, I saw her then and we were talking to her briefly (there), and then I came here (to Arizona State) and we continued those conversations,” Winkworth said.

Barbieri began her collegiate career at ASU in the fall of 2017. It took some adjusting, not just moving to a new country and a new city, but transitioning to a whole new style of soccer.

“In the United States it is more physical, the girls are faster, stronger and here in Brazil we are more technical, we keep the ball with freestyle,” said Barbieri, before adding, “It is different but it is cool though. It keeps the game (at a) very high level.”

Although she initially had to adjust to the physical aspect of American soccer, her passing ability and skill on the ball shined through. Both are important tools for any central midfielder.

“She’s extremely technically gifted, her passing range is excellent, the short passes, long passes she’s excellent,” Winkworth said of her talents. “She’s very good and comfortable in possession of the ball under pressure, so you’re happy to give her the ball even with opposing players around her because she’s very comfortable with the ball at her feet.”

Barbieri plays the classic style of Brazilian soccer, often described by the locals as creative, spontaneous and skillful. Its beauty can be seen today by such players as Neymar Jr. and Roberto Firmino, who help keep the Ginga style of play alive. 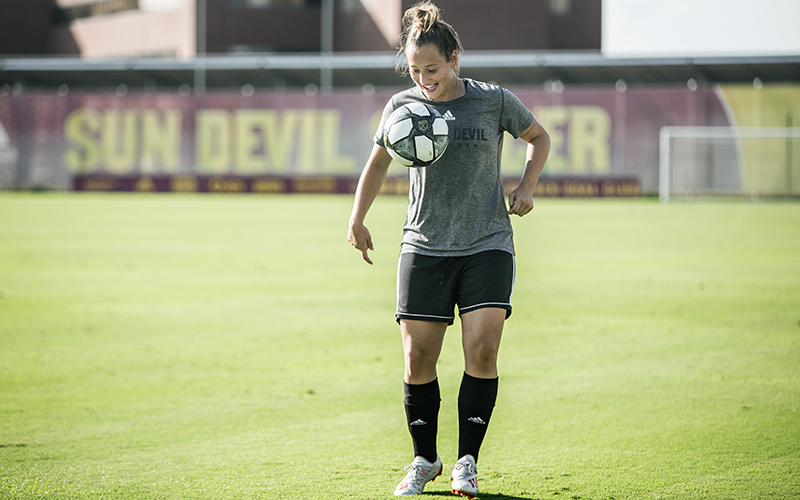 Lara Barbieri, one of Arizona State’s veteran midfielders, is stranded in Brazil because of travel restrictions but hopes to return before the start of the season in February. (Photo courtesy of Sun Devil Athletics)

According to El Arte de Futbol, “Ginga is a blend of Brazilian culture that seeped into the football fields. The first ingredient that influenced Ginga was a martial art called Capoeira. The second part of Ginga involves the principles of Samba dance. Combining these two strong and versatile styles of the Brazilian culture gave birth to the quick-witted, swaying and fast-flowing movements of Ginga. The style is a dominant flavour of football in the country and focuses on an attack-minded game.”

“One area she is working hard at … is the defensive side of the ball. Her understanding of how to defend as a midfield player has improved dramatically,” he said. ”The strength and conditioning side of the game is very important in the U.S. and I think that’s another area she enjoys working with the staff that we have and the facilities that we have, that’s another area she’s shown some growth.”

Barbieri has communicated with ASU coaches and staff while she’s been stranded and has been given a conditioning plan to follow at home.

This upcoming season, whenever it may happen, will be Barbieri’s senior year at Arizona State. Luckily the journey will not end once she graduates, as the NCAA has granted an extra year of eligibility for many athletes because of the pandemic.

Barbieri said her biggest goal for the 2021 season is to “get into the tournament,” meaning the Women’s College Cup, a 64-team March Madness-style tournament to determine the Division I women’s national champion. Stanford has won the title two of the last three years. But Stanford is not the only challenge in the Pac-12 for ASU. A total of eight teams from the conference made the 2019 Women’s College Cup, with UCLA and Washington State joining Stanford in the Elite Eight. This doesn’t change a thing for the Sun Devils.

“Not only my goal but the entire team, that is what (we have been) looking for the past three years, and it would be awesome to end my senior year getting in the tournament,” Barbieri said.

Along with dealing with all new COVID-19 protocols put in place by the NCAA, the Sun Devils will be playing in a newly renovated stadium. During the pandemic, plans moved forward for renovations to the soccer and lacrosse team fields and the project was completed in September.

With the new field will hopefully come new success for the program. In the 2019-20 season, Arizona State finished 6-11-3 and, after opening with five straight victories, failed to pick up a win in Pac-12 play. The goal now is to grow from last year’s campaign.

Assuming Barbieri can make it back in time for the season, she will be one of three seniors on the squad looking to lead the young Sun Devils.

“I’m hoping since March she’s had the opportunity back home to make sure she’s running a lot, make sure she is getting fit,” Winkworth said. “If she (has) then she can certainly unlock an opposing team’s defense with her vision, her composure, and her technical skills.”

For the moment, Barbieri plays the waiting game, hoping she can re-enter the country before the season kicks off. While entering the United States directly from Brazil isn’t possible because of government restrictions, Barbieri had a backup plan.

In a time where nothing is sure, the Sun Devils simply have to hope they can get a skillful dribbler and veteran presence in Barbieri back to Tempe for the spring season. That’s all they can do. Hope and patiently wait.