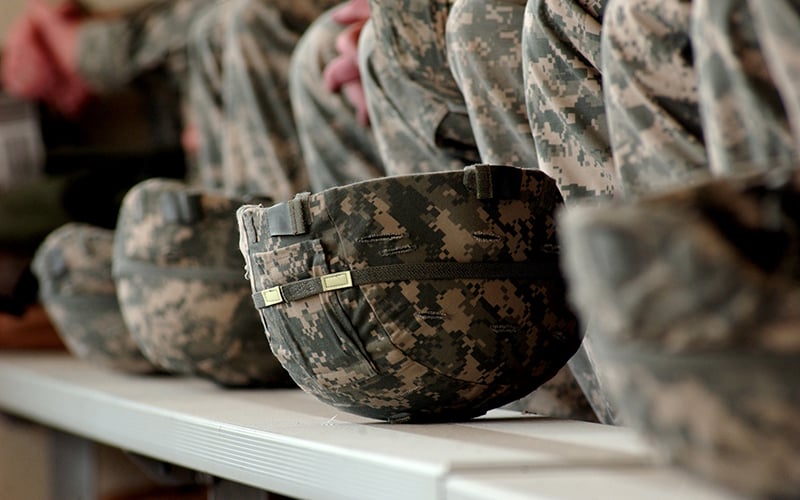 Younger veterans face growing risks of suicide, though there are programs that can help. (Photo courtesy of U.S. Army)

Alex Martinez looked over his Air Force dress blues, the uniform he wore when he graduated from boot camp. He touched his insignia – a circle with a star in the center and a striped wing flaring from either side – that signified his rank of airman second class.

“I was in the military for three years, 11 months and 13 days,” said Martinez, 25, of Arizona. “From the day I got out of basic training, I was ready to get out” of the Air Force.

During his time in uniform, Martinez contemplated suicide, a phenomena that increasingly affects younger veterans. In fact, veterans ages 18 to 34 experience a higher rate of suicide than all other age brackets. The suicide rate for young veterans swelled by 76% from 2005 to 2017, according to the Veterans Affairs’ 2019 National Veteran Suicide Prevention Report, released in 2019.

Yet unlike soldiers who served in frontline deployments in Iraq and Afghanistan, Martinez had never experienced combat – a subtle side of military suicide that isn’t fully understood. In fact, a 2018 Pentagon study determined that 41.7% of active duty military members who died by suicide in the previous year had not been deployed.

Martinez suffered from suicidal thoughts, isolation, addiction and a culture that suppresses and neglects the mental health of its members.

Service members often deal with declining mental health while transitioning back to civilian life, said Dr. Michael Marks, a clinical psychologist at the University of Arizona and former lead psychologist at the Southern Arizona Veteran Affairs Healthcare System in Tucson.

“We know today that actually more veterans who have not been deployed will take their lives than people who were actually in combat,” Marks said.

After basic training, Martinez was sent to Wright-Patterson Air Force Base in Ohio.

“I started to feel sad and depressed almost instantly when I got there,” he said. “I wanted to join the military and get to see the world or perhaps the country. And I got stationed five hours away from where I grew up.”

On his first day on base, he made a mental health appointment and got some advice from the officer in charge.

“I said, ‘Sir, could you help me find the mental health department?’ His reaction was, ‘Oh you need to find mental health? Just start acting crazy, start acting nuts.’ And then he mimicked, almost like someone having a seizure, and said, ‘That’s how you get mental health.’”

After that, Martinez sought help on his own.

Savannah Stewart, a petty officer second class in the Navy, also was disregarded while serving on the U.S.S. George H.W. Bush, an aircraft carrier based in Norfolk, Virginia.

“I had a mental crisis,” she recalled. “I fought with depression. And the first few people I saw (in the military) didn’t believe me and thought I was fine.”

Stewart sought help outside the military.

“Then I saw a doctor that was a civilian, he took me seriously and he recognized that I was facing depression issues,” she said. “It’s kind of something that you have to unlearn.”

Veterans also must adjust back to civilian life and unlearn what Marks described as “warrior culture,” which teaches service members to act without expressing feelings and asking for help, which others may see as a weakness.

The reintegration process back to civilian life can be the hardest period for veterans, and many never finish the transition, Marks said.

“The expectation is you come back to this civilian culture and you’re supposed to automatically shift into that mindset,” he said. “In my estimation, it’s completely unrealistic.”

David Donaldson, an Army veteran, said it was difficult to shift from a strict military structure to the vagaries of civilian life.

“Isolation is the big killer here,” Marks said. “They get out and they go on with their lives and then they unfortunately get isolated. That’s where they get in trouble.”

The military’s view and response to mental health is changing, however.

In 2017, President Donald Trump signed a bill to expand mental health resources by screening all service members before they leave the military and create a program to help Veteran’s Affairs identify at-risk service members.

Nonprofit organizations and the VA also are collaborating to create a resources network to provide mental health services before and after members leave. Recovery Engagement and Coordination for Health – Veterans Enhanced Treatment, a program that identifies veterans at-risk of suicide, was created in 2017.

Operation Safe is another Veterans Affairs program that focuses on recognizing the signs of suicidal ideation, validating veterans’ experiences and helping them move past the stigma associated with suicide, according to Dimitri Ntatsos, a social worker and suicide prevention coordinator at the Phoenix VA.

In Arizona, Be Connected is a statewide upstream suicide prevention effort that connects veterans and their families with resources available to them. Service members can call a support line or utilize the program’s website to be matched to one of the resources Be Connected has across Arizona. It also provides training to bridge the gap between military communities and nonveterans.

“Instead of having to know 3,000 organizations, you can know one support line and call into it and be connected to any organization or resource you are looking for,” said Chessa Emmons, coordinator of the Be Connected program at the Arizona Coalition for Military Families in Phoenix.

The program’s upstream process aims to help service members before they reach a crisis point by providing knowledge and resources to find a better job, earn a degree or certification, receive financial help, recover from substance abuse or get therapy for spousal and familial issues.

“We’re really trying to remove those barriers there by being able to say, ‘It’s not difficult, and if it does seem that way, we’re here to help you navigate that,’” Emmons said.

Aiding veterans must be a societal effort that requires changing the way nonveterans treat military members when they return home, Marks said.

“I never tell a veteran ‘thank you’ for their service,” he said. “One of the things I tell them (is) ‘I’ll thank you for your service when you’re dead.’

“What I will say is welcome home. Welcome home and you’re part of the tribe.”