Jordan Marie Brings Three White Horses Daniel, a distance runner from South Dakota, wanted to do more to help the Missing and Murdered Indigenous Women Movement, so she made it part of her running experience and featured it on her social media. (Photo courtesy Devin Whetstone)

PHOENIX – The sight can be jarring: As a runner’s graceful stride brings her closer, her face comes into focus.

We will not be silenced.

The painted hand has become a powerful symbol for the Missing and Murdered Indigenous Women Movement, known as MMIW, a cause boosted by the increasing number of athletes embracing it.

“I didn’t really think the paint would impact me as much,” said Rosalie Fish, a member of the Cowlitz Tribe of southwest Washington and a standout runner whose stops have included the Nike Cross Regional Southwest in Casa Grande. “I would just be running like any other time, except now it would be for other people. But instead, it was actually very emotionally tolling to run for women that were no longer here.”

A recent study by the Urban Indian Health Institute found that only 116 of 5,712 cases of murdered or missing Native women were logged into the Department of Justice’s nationwide database.

Murder is the third-leading cause of death among American Indian and Alaska Native women, and rates of violence on reservations can be up to 10 times higher than the national average, the report said, quoting statistics from the Center for Disease Control and Prevention.

The institute also took a specific look at Indigenous women living in urban areas – 71 cities – and found 506 cases of missing and murdered Indigenous women, although it considers the total low because of the challenges to collecting data. Tucson, at 31, had the fourth-most cases in the country.

Athletes are increasingly widening the lens in which fans and spectators view social injustices, from focusing on movements that directly affect them to bringing a voice to those silenced by violence.

As awareness for the MMIW movement continues to grow, young athletes in Arizona are using their platforms to call attention to it.

Several factors played a role in the team’s decision to raise awareness.

“We more than anything just wanted to do something good. And I preach that to our players in the program all the time. My two-word phrase that I use all the time for them is just ‘do good.’ I want them to do as many good things in their life as possible.” 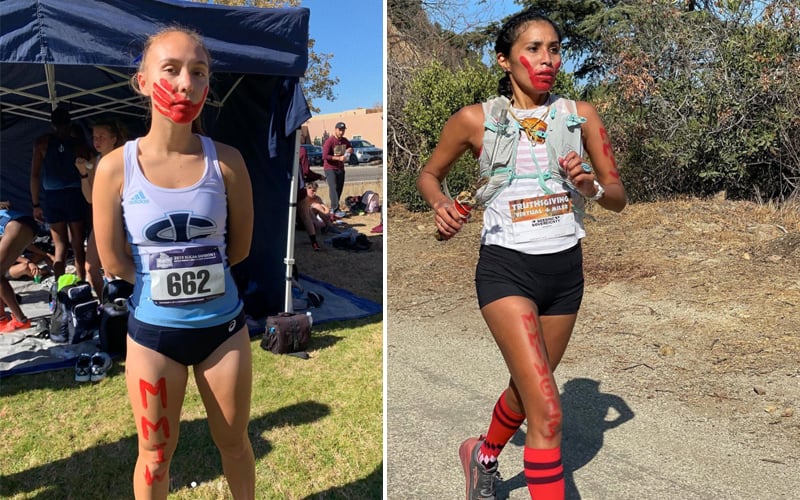 One of the movement’s strongest voices comes from Jordan Marie Brings Three White Horses Daniel, an Indigenous woman, athlete and member of Kul Wicasa Oyate, the Lower Brule Sioux Tribe in South Dakota. She is committed to bringing awareness to the MMIW epidemic.

She participates in a variety of events, including prayer runs, prayer vigils and runs for charities. She recently made it a priority to bring attention to an issue she felt was only being heard throughout Indigenous communities.

She said she was “constantly seeing the work of advocates and the families fighting for justice and working towards healing and some sort of resolution and some sort of solutions, preventative measures, policies being introduced (but it) just felt like the support wasn’t there,” Daniel said. “And it got to a point where I was just fed up with it, like, I can’t keep talking about this, sharing about this, organizing panels. Like, if that’s not doing anything, I need to do something that is specifically for them.”

Daniel had kept running and activism separate in her life but finally decided to combine the two and use her platform at the 2019 Boston Marathon.

“There was just an opportunity to create this space and be intentional with it and offering prayers, praying for justice, praying for visibility and support for this movement and the families and the advocates. And just my way of giving back to them and letting them know that someone among many, I’m sure, are thinking about them and not forgetting them.”

In Daniel’s Instagram post from the marathon, a photo shows the red handprint across her mouth, MMIW written down one leg and a caption to express the names behind the handprint.

Once Daniels brought the movement into her running, she inspired Fish to follow in her footsteps.

Fish hoped to raise awareness in the same way Daniel did.

“She asked me for my blessing to do the same thing in her state meet a few weeks later after my Boston run, and I said, of course, and we’ve been in touch and we’ve been close ever since,” Daniel said. “And she’s done the same thing. And with her run and how intentional she was and prayerful, she elevated it even higher.”

Like Daniel, Fish uses social media to promote change. In an Instagram post, she wears the red handprint and MMIW down one leg. She also lists the names of some of the missing and murdered: 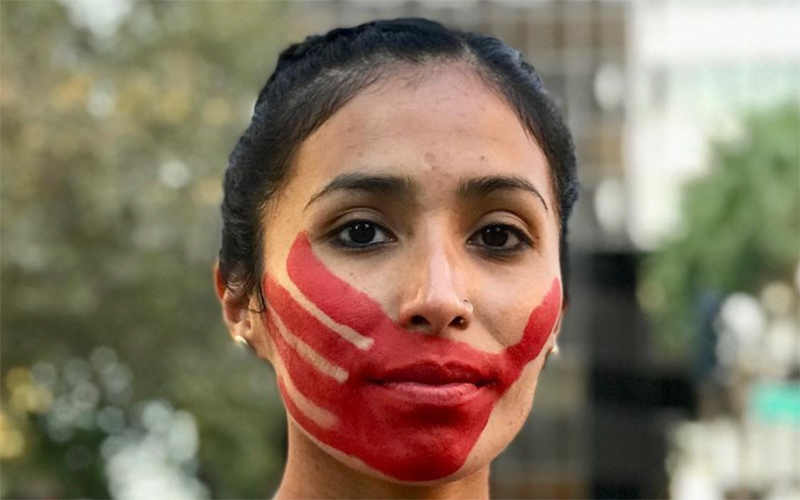 The red handprint that Jordan Daniel wears across her face represents a message that Missing and Murdered Indigenous Women Movement wants out: “We will not be silenced.” (Photo courtesy Devin Whetstone

From once being runners in separate spaces, Daniel and Fish now run in the same race, one of bringing change and raising awareness. They have grown their relationship, too. Daniel refers to Fish as her little sister and the two are unified to call attention to the epidemic.

The handprint is more than just red paint across their mouths. Its symbolism carries the weight of emotions behind it. Both said it takes a toll mentally and physically when preparing for and running in races. After Fish ran her first, she messaged Daniel to talk about the impact the handprint had on her during competition.

“I contacted Jordan that night and I said, ‘I felt like I ran terribly. You know, I’ve never felt like this before and I don’t know what’s going on. Maybe I’m not the right person for this.’ But Jordan told me that the feelings that I were feeling were completely expected and normal and to just accept that this was the way that I was feeling. And that’s OK. And eventually, you know, I’ll adjust.”

Daniel spends time before her races researching the names of the victims and learning the difficult details of what happened to them. It takes a toll, from insomnia to anxiety to panic attacks to nightmares to not feeling fully rested before a race.

“Having to sit with that mentally, emotionally and spiritually just weighed on me over time, and it got to the point where I finished my last race in December and I was like, ‘I need to heal. I need to work on this injury. I need to work on myself,’” she said.

Daniel has worked to overcome the effect it has on her body while still bringing light to the movement. She finds that even running without the red handprint and only the letters helps take some of the weight off her runs.

Ultimately, Daniel and Fish run for a greater cause.

“I would like to think that, you know, I’m just doing justice to the people who deserve it,” Fish said. “I would say that selflessness is kind of something that’s expected of native people. It’s something that I guess, for example, it’s embedded within the culture of my tribe anyways.

“It’s to be selfless and to put your people’s needs just as important, if not more important than your own.”