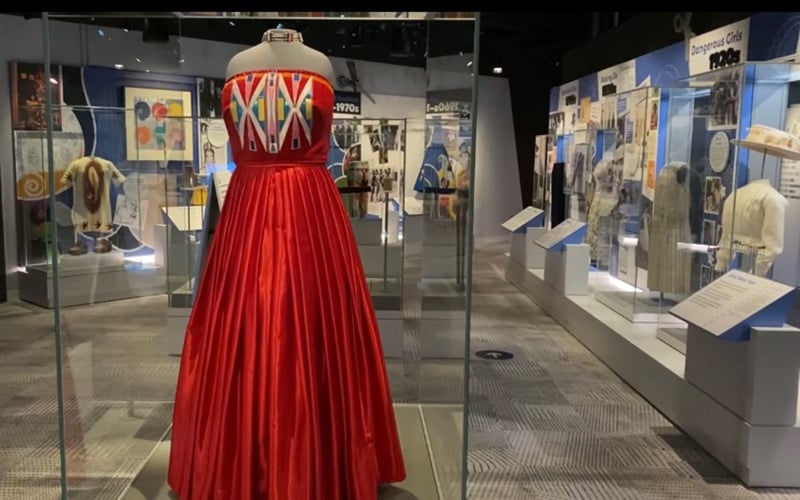 WASHINGTON – It’s one of the most important events in a teenager’s life – high school prom.

For Isabella Aiukli Cornell of Oklahoma City, her junior prom in 2018 was about more than just wearing a stylish gown in a high school gymnasium. It was an opportunity to call attention to what has been described as an epidemic of murder and abuse faced by Native American women.

“We have a really high rate of women who go missing every year, and there’s not a lot of media coverage about it,” Cornell said. “I wanted to make a statement about the ongoing crisis going on in our communities.”

Government statistics are sobering. Native women are murdered at a rate 10 times higher than other ethnicities, According to the Centers for Disease Control and Prevention. Figures of the National Institute of Justice suggest that 84% of Native women have experienced violence in their lifetimes.

For her prom in 2018, Cornell, a member of the Choctaw Nation, chose a custom-made dress made by Crow designer Della Bighair-Stump of Hardin, Montana. The purpose was to bring attention to the peril faced by Indigenous women.

“The color red is symbolic of the Missing and Murdered Indigenous Women’s movement,” Cornell said. “The bodice was made to incorporate a little bit of the (Choctaw) tribe by adding diamonds to the design.”

Red is the official color of the Missing and Murdered Indigenous Women’s movement to symbolize a bold statement, Indigenous women’s issues will be seen and heard.

Aside from being a statement color, multiple tribes also believe that red is the only color that spirits can see. The project believes that the color not only will help to bring awareness to the cause but also help guide back the spirits of the murdered women and children so they can be laid to rest.

“Native dresses, like the ones designed by Della, are highlighting the unique way young Native people are incorporating their traditional heritage into contemporary spaces as a way to show off their ancestral pride,” an article in Teen Vogue said.

“I am just super honored and very happy that my dress will be getting a lot of coverage,” Cornell said. “A lot of times the only people talking about MMIW are Native people.”

A year later, Cornell and her mother were contacted by the Smithsonian National Museum of American History about including the gown in a new exhibit called “Girlhood.”

The exhibit was created to commemorate the 100th anniversary of women’s suffrage by showcasing how women have changed history in five areas: politics, education, work, health and fashion.

Cornell’s dress sits in the center of the fashion section on display. From there, it will tour the country through the Smithsonian Institution Traveling Exhibition Service from 2023 through 2025.

“While I am a little bit sad that I don’t get to have it in my physical possession anymore,” she said. “I’m more happy that a lot of other people will be able to learn something from it and for more awareness to be spread because that’s the whole mission behind it.”

The student of Fort Lewis College, a former Indian boarding school turned public college, never expected to find her prom dress in the center of a Smithsonian museum exhibit, but says that it gave her a chance to educate others on the struggles that Indigenous women face.

“By having it in the museum, that means that a lot of other people will be able to see it and understand what’s going on and that’s really just the whole goal behind all of this.”

Gaylord News is a Washington-based reporting project of the University of Oklahoma Gaylord College of Journalism and Mass Communication. Cronkite News has partnered with OU to expand coverage of indigenous communities.