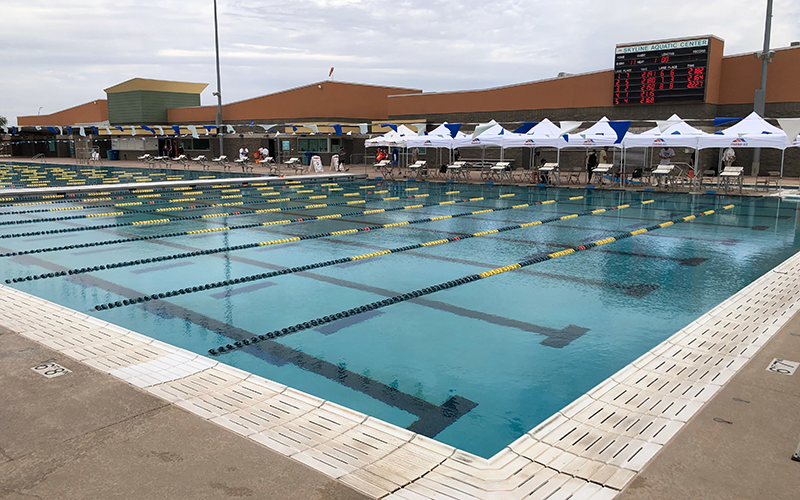 The 2020 AIA State Swim and Dive Championship was held at Skyline Aquatic Center in Mesa. (Photo by Edwin Perez/Cronkite News)

PHOENIX – As high schools transition from fall to winter sports, Brophy Prep is left to reflect on a season that ended abruptly.

After 32 years of dominating Arizona high school swimming, the boys team finally ran into an opponent the Broncos couldn’t outswim.

“And for their send off, it was pretty devastating for them.”

The Broncos withdrew from the 2020 AIA State Swim and Dive Championship following an outbreak of COVID-19, and Scottsdale’s Chaparral High took advantage of Brophy’s absence to win the Division I boys title on Nov. 6-7. The Firebirds also dominated the girls championship.

It ended a Brophy championship streak that dated to 1988, if not the long-term Broncos dynasty. In all, the Broncos swim dynasty has accounted for 42 state championships.

Despite the disappointment, Brubaker is confident Brophy took the proper actions in following AIA protocol and said he has no regrets about how his team handled the season.

“We followed all of the protocols. We did everything that we could handle, and sometimes it just happens. It just happens,” Brubaker said, “… but you got to keep moving forward.”

After most professional, collegiate and high school sports were either postponed or canceled when the pandemic hit during the spring, athletes and coaches at Arizona’s high schools were unsure what their seasons would look like – or if they’d even have them.

Brophy was able to compete in four meets, finished first in its state-qualifying and had several individuals and relay teams seeded first for the state championship, which left Brubaker thankful for what the Broncos were able to get out of the season, despite the circumstances.

The Broncos’ inability to compete in this year’s state championship doesn’t take away a season full of hard work or the years of hard-earned titles. And those familiar with the Brophy program believe its swimmers will continue to work hard and show the same drive that led to 32 consecutive championships when they get their next opportunity. 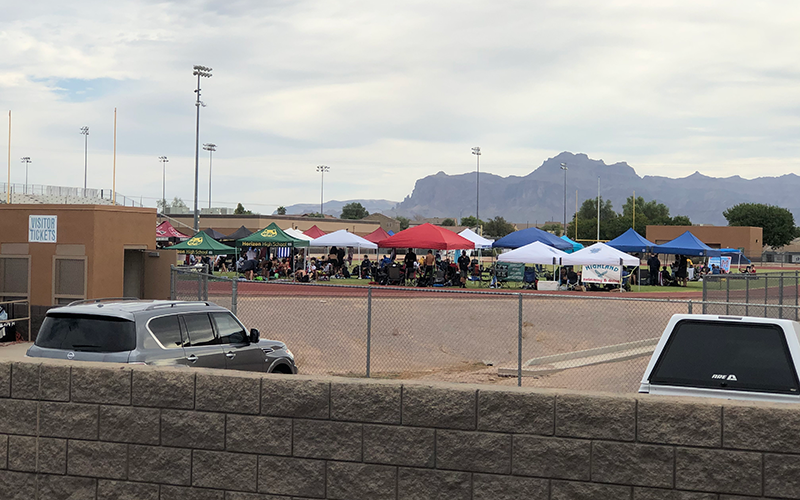 Teams and swimmers wait under tents for their events, when they will then enter the swimming facility. (Photo by Edwin Perez/Cronkite News)

Red Mountain coach Patrick O’Neill, a former Brophy coach during the winning streak, is confident that the Broncos will continue to succeed because of their culture of hard work.

O’Neill said the work ethic of the team was driven by an expectation the swimmers had of themselves and of each other to maintain the streak and the high level of competitiveness that comes with being a part of the program.

While it was hard for the team and community to learn they would not be competing for a 33rd state championship. Brubaker, confident that the Broncos followed all of the correct safety protocols, isn’t as focused on the title as much as he is on preparing his athletes and teaching them qualities that will make them successful beyond their swimming career.

“As a coach, winning championships was great. But it’s my duty to instill in these boys to become young men. To teach them integrity, teach them grit, teach them everything, what it means to be a man for others,” Brubaker said. “That’s our main motto at Brophy. Winning a championship is just the cherry on top. The championship streak is great but, my duty as a coach is do everything else first.”

Brubaker wants to celebrate those who were able to compete at the championships and focus on preparing for next season, assuming that there is one, while not losing sight of what is happening in the world amid the pandemic. 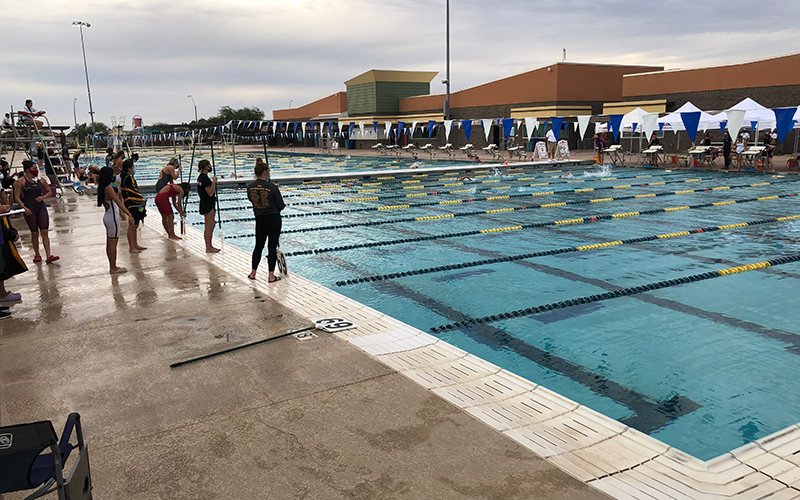 During their events, swimmers adjust to new COVID-19 protocols, including wearing face masks while waiting outside of the pool. (Photo by Edwin Perez/Cronkite News)

O’Neill, for one, expects Brophy to return to form despite the setback this season.

“I think Brophy is going to come back next year, probably, stronger than they have been in the last couple of years.” O’Neill said. “They are loaded with talent, and the kids who’ haven’t graduated are going to come back hungry.”

The Broncos had not lost in the state meet since 1987, when they saw a six-year championship streak snapped.

But the school’s swimming team is not the only team at the school that has dealt with COVID issues. During the summer news broke that some Broncos football players tested positive for COVID-19.

The Broncos ultimately started their season, but it ended with one week remaining when Brophy officials announced the team would not finish the season due to a rise in COVID metrics in the community.

The state swim meet went on without the Broncos, and Chaparral held off Desert Vista in the boys competition while the Firebirds’ girls team beat second-place Xavier Prep by almost 200 points.

The AIA took various steps to protect athletes during the competition, including completing events in waves of three to four events, then taking a break from races to allow swimmers for the next round of events to warm up.

Also, when swimmers completed a race, they were required to exit the pool at the opposite end from their start with a mask to control the floor of traffic in and around the pool in an effort to keep people from gathering at one end of the pool.

Coaches and swimmers were required to wear a face cover at all times except when swimming. Fans were not allowed to attend, but the event was live streamed.

The AIA also eliminated trophy presentations for championship winners, swimmer of the year and coach of the year. Instead, the awards were delivered to the schools of the winners.

Team tents were arranged on a football field near the pool, with athletes required to rest and wait for their event at their team tent to avoid large gatherings.