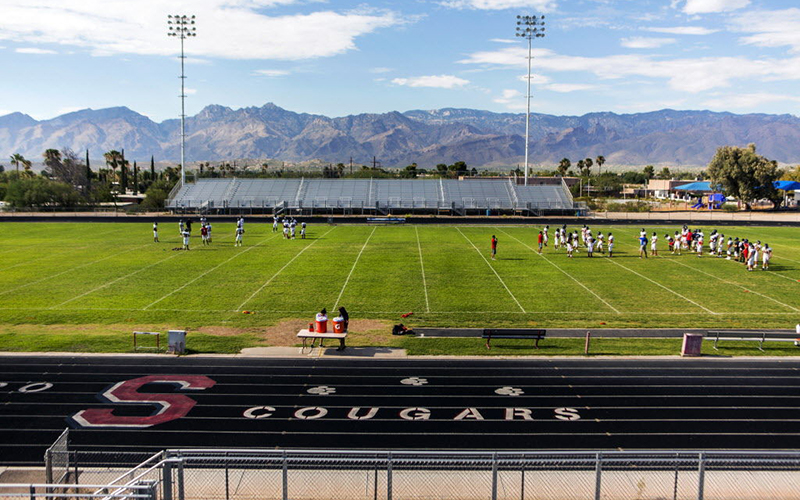 TUCSON – With the number of COVID-19 cases surging in Arizona, the football season for Tucson schools came to an abrupt end on Tuesday.

Gabriel Trujillo, superintendent of the Tucson Unified School District, made the decision to suspend the remainder of fall sports, mainly affecting football for the Tucson schools, which were set to compete with Tolleson and Phoenix schools in their own postseason tournament, separate from AIA competition.

“Out of an abundance of caution and at the recommendation of the Pima County Administrator’s Office and public health recommendations issued by the Pima County Health Department, I’ve made the difficult decision to suspend the remainder of the football season,” Trujillo said in a statement. “Effective today, all practices and games have been suspended. … Tucson Unified is not the only district to take this action as all southern Arizona school districts have also canceled the remainder of their respective game schedules which leaves our schools without opponents to play.”

On Nov. 24, Pima County reported over 4,700 new COVID-19 cases, a large surge compared to 3,270 from six days earlier and approximately 2,400 on Nov. 6, the day that Tucson schools began their football regular season.

Pima County reported less than 1,000 new COVID-19 cases on Oct. 26, which is less than a fourth of the Nov. 24 new-case numbers in less than a month’s worth of time.

The reaction from athletes and coaches about the season’s halt was one of sadness, Sabino High School Athletic Director Kyle Howell said.

“Everybody’s put a lot into making sure that this season could go on successfully, even amongst the pandemic,” Howell said. “Speaking specifically for us, our kids did a great job of prioritizing their health and the health of others (by) staying away from large-gathering social events.

“We were fortunate to have zero cases on our campus, and some of that’s luck, (but) I think a lot of it needs to also be attributed to the due diligence of our students, coaches, parents, (and) community members. But overall, I think it’s just a difficult thing to swallow and I’m just sad for the kids and the coaches that have put so much into their sport.”

Not only are student-athletes and coaches saddened by the decision, but parents are disappointed as well.

“I know that there are parents who are hurting,” Howell said. “I’ve talked to no less than 20 or 30 of our parents, and even those that understand or support the decision are hurting.

“It’s a difficult (decision), so there are upset people, upset parents, (and) upset students. Right now, we’re trying to interact with those people and provide all the information we can to support them and the kids moving forward.”

With the AIA announcing last week that winter sports will be postponed until Jan. 5, Howell hopes that Sabino and other Tucson schools will be able to compete in winter sports in an AIA schedule.

“The next relevant date for TUSD is Dec. 7, which is when winter sports will be revisited,” Howell said. “We suspended winter sports activities until then. Our kids have already gone through acclimation, they’ve been in full practice. Our desire and intent (are) to compete in the AIA calendar and for a state championship in the sports that we’re allowed to. But we’ll also be given guidance by our district, and in conjunction with other districts in southern Arizona, about what calendar we fall on.”

What went into the decision? Howell said he was provided with limited detail.

“The decision was made, to my knowledge, after an ask from the Pima County administrator’s office directly to the superintendent of southern Arizona and then public-school superintendents as well. The exact metrics that were concerning, I’m not privy to that information.”