Activists have been protesting against the Resolution Copper mine at Oak Flat for years, including this 2015 protest in Washington. Opponents of the mine now worry that the Trump administration has fast-tracked the mine’s final environmental impact statement – a claim both the mine and the U.S. Forest Service deny. (File photo by Jamie Cochran/Cronkite News)

WASHINGTON – Activists worry that the Trump administration has fast-tracked the final environmental impact statement for the massive Resolution Copper mine, a project planned for lands near Superior that are claimed as sacred by the San Carlos Apache.

Opponents became alarmed when the U.S. Forest Service’s schedules of proposed action, which said the environmental statement would be completed by December 2021, suddenly shifted this year to a finishing date of this December, before President Donald Trump leaves office.

“A lot of alarm bells went off when we saw this,” said Randy Serraglio, Southwest conservation advocate at the Center For Biological Diversity. “We realized … they’re just rushing this through to get it done, while Donald Trump is still president.”

But officials with the Forest Service and Resolution Copper mine insist nothing is being fast-tracked.

Ivan Knudsen, a Forest Service spokesman, said more than “30,000 submittals received during the public and tribal comment periods” were cataloged since the last draft of the environmental impact statement was published in August 2019. He stressed that the timeline adjustment from 2021 to 2020 does “not reflect an acceleration of the … process” and that federal and local appraisals are being conducted.

“Once completed, they will be reviewed by the regional appraiser, and after they are accepted, made available to the public for review,” said Knudsen.

Dan Blondeau, a spokesman for Resolution Copper, said the review process, which has been going on for the past seven years, will still go on and the mining company will continue working with stakeholders to minimize the impact of the project.

“The project is not being ‘fast-tracked’ and Resolution Copper has not sought to apply for programs that are available to expedite projects in permitting review,” Blondeau said in a statement Tuesday.

Blondeau noted that the first schedule for the project, published under the Obama administration, called for the environmental review to be completed by July 2020 – four months ago.

“The permitting process started in 2013 and over the last seven years, the Forest Service has conducted a rigorous review of the project,” Blondeau’s statement said. “The delay in the publication of the FEIS is a result of extensive public consultation, significant interagency coordination and COVID-related changes to the pace of work.”

Release of the final environmental impact statement starts the clock on a land swap between Resolution Copper mine and the federal government, with the government ceding 2,422 acres of copper-rich land in exchange for 5,344 acres of environmentally significant land.

As part of the swap, the federal government would give up Oak Flat, a campground that has been protected since 1955 under an executive order that was issued by President Dwight Eisenhower. The land is considered sacred to Native Americans, who collect herbs at the site, gather for ceremonies and pray there. 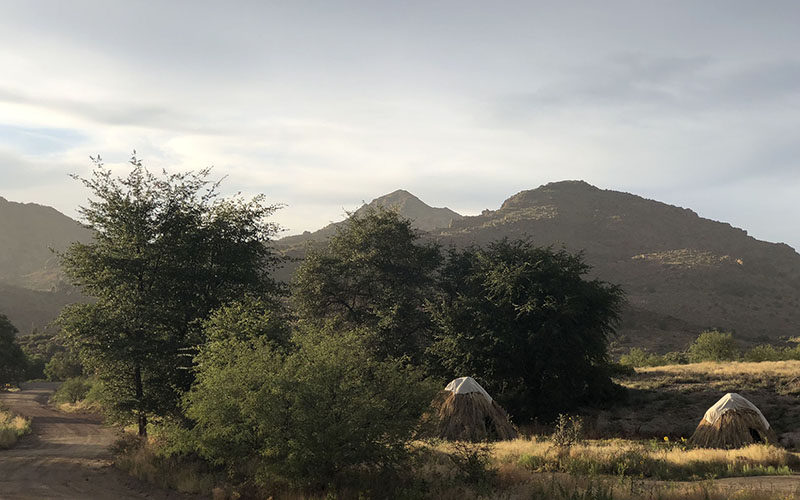 Opponents of the Resolution Copper Mine say it will damage land sacred to the San Carlos Apache and pose environmental threats. The mine, pointing to years of project review, says it’s committed to being a good neighbor. (Photo by Russ McSpadden/Courtesy Center for Biological Diversity)

Several requests for comment from Apache Stronghold, a group that has been camping and protesting to preserve the Oak Flat site for years, were not returned.

One concern of opponents is the mining process that Resolution has proposed, block caving, in which the ceilings of mine chambers are collapsed and the rubble removed for processing. After years of caving, the ground above – Oak Flat – would gradually sink into a bowl.

Efforts to approve the land swap failed for years, until then-Sen. John McCain, R-Arizona, included the deal as an amendment to the must-pass Defense Department spending bill in late 2014.

The company calls the land one of the largest untapped mining deposits in the world, capable of supplying up to one-fourth of U.S. copper demand. Over what is expected to be 40 years of mining on the site, the mine is expected to produce about 40 billion pounds of copper.

The company claims that at full capacity, the mine will employ about 1,500 workers with an annual payroll of $134 million. State and local taxes would be boosted by $88 million to $113 million a year, according to company projections.

But opponents say those benefits come at too high a cost.

“That has devastating impacts for wildlife … it will ruin a lot of critically important habitat,” said Serraglio. “And there are endangered species in the area that would be impacted.”

Serraglio calls the environmental review process “a charade,” since the law approving the land swap says it must go through within 60 days of the final report, regardless of what the environmental study finds. That 60-day window is too tight for opponents to file lawsuits or launch complaints against the deal, he said.

The law creates “this sleazy situation where they could just hand this land away to this international mining behemoth without any public objection at all,” said Serraglio, noting that 60 days is the maximum amount of time for the swap to happen. It could come sooner.

But Blondeau said that even if the environmental impact statement came down tomorrow, there “is much more to do before mining can begin.”

He forwarded a statement from Resolution Copper project director Andrew Lye, who said, “After the permitting process, a detailed feasibility study will be completed over a period of years to inform considerations on investment to proceed with the project.”

“Resolution is committed to ongoing community engagement and support for programs to protect Native American cultural heritage and help diversify the local economy,” Lye’s statement said. “We will ensure Oak Flat campground remains open for as long as it is safe to do so, this is expected to be for at least the next few decades.”

Serraglio that even if mining will not begin for years, “from their perspective, they want to get this land in their pocket right now soon as possible.”