By Shane Fricke/Special for Cronkite News 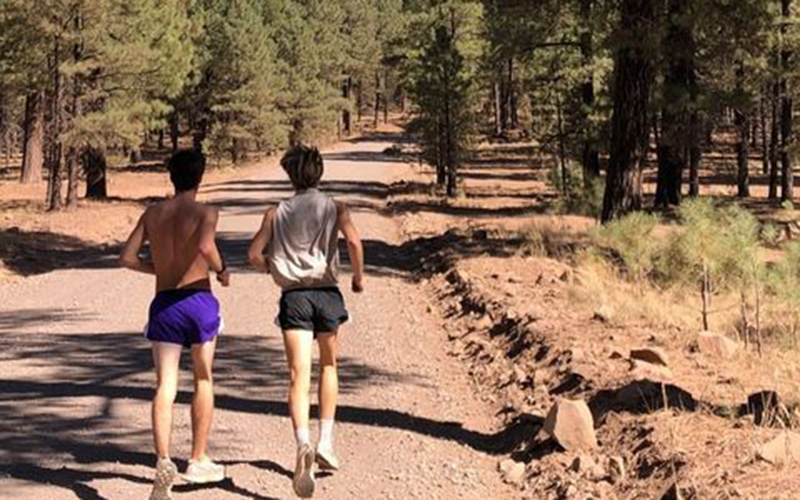 FLAGSTAFF – One of the attractions of running is that it is a sport that can be done anywhere, at any time and by almost any person. So, if all of that is true, why are collegiate runners from all around the country traveling to this northern Arizona city to train?

It turns out Flagstaff, a city of about 65,000 people situated at 6,900-feet above sea level, offers runners the perfect combination of rarefied air, forgiving trails and housing that fits a college student’s budget.

“We chose Flagstaff because it’s a great running town at high elevation with lots of remote trails and has a relatively low cost of living,” said Liam Anderson, a sophomore on Stanford’s cross country team.

Anderson and four of his Stanford teammates relocated to Arizona’s high country in April while quarantining because of the COVID-19, escaping the Bay Area to train. They spent 10 weeks in Flagstaff preparing for their fall season, which was ultimately canceled due to COVID-19.

During his senior year at Redwood High in Marin County, California, Anderson was named the Gatorade National Boys Cross Country Runner of the Year and won the 2018 Nike Cross Nationals with a then-record time of 14 minutes, 57 seconds over the 5K course at Glendoveer Golf Course in Portland, Oregon.

Despite a great running résumé, Anderson wanted to make the best of the pandemic and the necessity of remote learning by training in Flagstaff, a city where world-class runners seem to be on every corner.

He and his Stanford teammates weren’t the only collegiate runners who relocated to the Arizona mountains. The Johns Hopkins freshman cross country team is also taking advantage of all that Flagstaff has to offer.

After learning that their fall semester classes would be conducted remotely instead of on the school’s Baltimore, Maryland campus, 14 of the team’s 16 freshmen runners decided to spend the semester in northern Arizona for extended high-altitude training. The six men and eight women are living together in an Airbnb and training as a group every day.

The move was stressful for some of the athletes because many of them had not met other members of the team that they would be living and running with for the next couple of months.

Charlie Teeter, from Webster Groves, Missouri, is one of the Johns Hopkins runners who relocated to Flagstaff in August. Even though they came in as strangers, according to Teeter, they are all getting along well.

The group of 18-year-olds found the house they are sharing near downtown Flagstaff, negotiated the rent and agreed to sign a house rules contract that stipulates, among other things, the cooking and cleaning schedule.

Meanwhile, they are taking Johns Hopkins classes online and training daily in anticipation of competing for the Blue Jays, who have won the Division III women’s title in six of the last eight seasons and are a perennial top-10 contender on the men’s side.

“We’re all super tight now in the group, and we all mesh really well together. So I don’t think any of us could’ve asked for a better situation with team energy here,” said Teeter, who placed 23rd in Missouri’s Class 4 State Cross Country Championship in 2018.

Like most runners, the Johns Hopkins cross country freshmen were lured to Flagstaff because of the extreme elevation. Flagstaff proper is at 6,909 feet above sea level, but there are trails in the surrounding area that climb to about 10,000 feet.

According to Active.com, “Running at high altitudes decreases the amount of oxygen getting to the muscles. Low atmospheric pressure in the thin air makes the bloodless oxygen-rich as it travels to the muscles.”

For cross country runners it is similar to how baseball players put doughnuts on their bat while warming up, so when it’s time to compete their body is used to tougher conditions. The body reacts to training at high elevation by producing more red blood cells and more efficiently delivering oxygen.

Although running at altitude has long-term advantages, the adjustment can be uncomfortable.

“It’s definitely a very noticeable difference,” Teeter said. “An eight-minute mile effort up here, our first few runs, was the same effort we normally give at sea level for around seven-minute miles.”

Although Flagstaff is beloved for its elevation, there is more to it than thin air.

There are many other elevated U.S. cities that lure world-class athletes, but Flagstaff’s variety of trails and its vast running community separates it from the pack.

It is home to the Northern Arizona Elite running team, which sent five athletes to the U.S. Olympic Marathon Trials in February, including women’s winner Aliphine Tuliamuk. Ultra-marathon champion Jim Walmsley, course record holder at the prestigious Western States 100, lives and trains in Flagstaff. And the city’s running reputation is also heightened by the success of Northern Arizona’s track and cross country programs.

The Lumberjacks’ cross-country program is regarded as one of the best in the nation with NAU’s men’s team ranked first in the most recent NCAA Division 1 Coaches Poll, according to ustfccca.org.

Flagstaff is also desirable because it provides great day trips to Sedona and the Grand Canyon, where even more trails await.

“It’s really amazing just to be out here in such natural beauty, to be able to wake up and see the mountains and on the weekends to be able to go out and do things like the Grand Canyon or see a meteor crater,” said Ashley Heidenrich, a member of the Johns Hopkins cross country team who hails from Aurora, Illinois. “So I think it’s just, all-around, a really great place to live and train, and I’m really happy here.”

Situated below the San Francisco Peaks, Flagstaff is in a beautiful setting with trails that take runners to scenic outlooks or along challenging forest routes. The trailheads near Lake Mary just south of Flagstaff are particular favorites for local runners.

“The prettiest trail we’ve been to, we went up to Aspen Corner and did a run up there,” Heidenrich said. “It was really beautiful with all the aspen leaves being yellow, and probably the prettiest run I’ve done in my life. But it was at 9,000 feet, so it was definitely really hard.”

As of now, Johns Hopkins is planning to return to in-person classes in the spring, and while no decisions have been made about spring track and field competition, after intense training in Northern Arizona for several months, the JHU runners expect to be ready.

“Flagstaff certainly has a lofty reputation as a running town and we were not disappointed by the many incredible places to run and work out,” Anderson said.

Though the pandemic crushed their plans of competing this year, spending a semester in Flagstaff has been the next best thing.

“It has far exceeded expectations,” Teeter said. “We’ve had access to any and every type of run we could want – hilly or flat, dirt, mountains, track surface (all) within 10-15 minutes of our house. Even the weather is perfect. It really is the best place to be if you’re a runner. We’ve all really, really enjoyed it.”