FLAGSTAFF – When Nick Hilton crammed everything he owned into his 1999 Volkswagen GTI back in 2012, he had only seen pictures of Flagstaff, the city that would soon be his home.

Hilton, a four-time Division II All-American runner for Lock Haven University of Pennsylvania, had just graduated and had never been to Arizona, or much of anywhere west of it. He admits to feeling the natural concerns of such a move on his Kerouacian drive across the country, but Hilton knew what to expect.

As he would later put it, “Its reputation precedes it.”

At 7,000 feet above sea level, Flagstaff overlooks sprawling coniferous forests and sits safely above the sweltering heat domestic to Arizona. That combination makes it a popular destination for tourists, but for distance runners — Hilton among them — it makes Flagstaff a practically unparalleled paradise.

“It’s one of two really big hubs for training,” Hilton said of his home of seven years. “Flagstaff and Boulder, Colorado, are probably the two biggest centers for elite distance runners in the country.”

The secret to the city’s importance to the endurance athlete community is in the science. With oxygen less available at higher altitudes, the human body is forced to create additional red blood cells, which distribute oxygen from the lungs to the rest of the body. A 2008 study on altitude adaptation found that runners experienced “a significant increase in red blood cell mass” over the course of just three weeks at an elevation similar to that of Flagstaff.

Athletes from all over the world flock to the running mecca to take advantage of this phenomenon, often referred to as “natural blood doping.” The city is an even more appealing training location when considering the overwhelming number of trails — it has more than 56 miles of urban trails, according to Discover Flagstaff — and the existence of HYPO2, a world-class training center for elite athletes. Since 2012, the company has boasted a total of 85 Olympic and Paralympic medals from athletes in 44 different countries, and was created with staff from the highly regarded Center for High Altitude Training at Northern Arizona, which closed in 2009 because of budget cuts.

Some travel to Flagstaff for a short stint to improve their times before a big race, while others, like Hilton, have something more permanent in mind.

Shortly after planting his own flag in the mountain town, Hilton got a job at Run Flagstaff, a specialty running store located downtown on Historic Route 66.

“Every day, all I do is talk with runners. I’m on the floor, I’m getting shoes, I’m talking to runners of all levels,” Hilton said. “They could be just starting, they may not even be runners, (all the way) to kind of your elite athletes to people who run trails.” 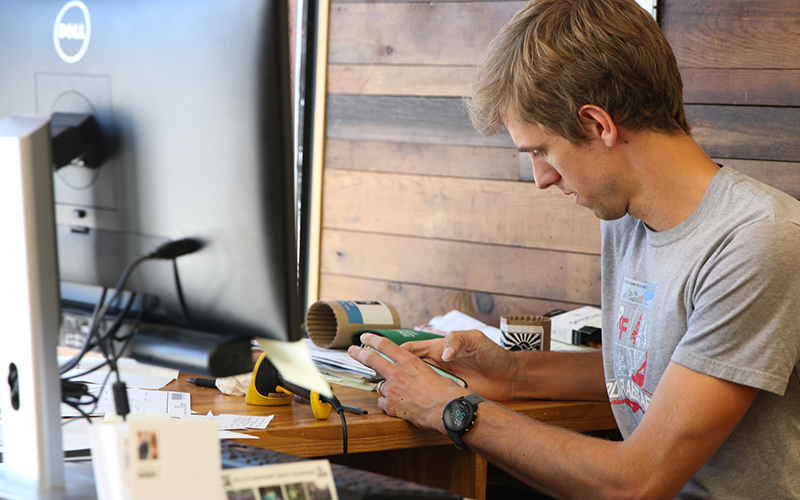 Nick Hilton, 30, said he likely wouldn’t have been able to stay in Flagstaff, Arizona, if not for Run Flagstaff. (Photo by Tyler Dunn/Cronkite News)

Run Flagstaff is the only store in the city that exclusively caters to runners, and as such, it has become something of a gathering place of talented runners since its opening in 2005. Hilton, 30, is now one of the managers at the store but is far from the only experienced distance runner working at the shop.

Courtney Barnes and Colin Schultz are two of Run Flagstaff’s newest employees. Both 24 and collegiate runners at the University of Kansas and Liberty University, respectively, Barnes and Schultz came to Flagstaff after graduation in much the same way Hilton did.

“I just kind of knew I wanted to put myself in a position to make connections, to be among the (Flagstaff) running community,” Schultz said.

Schultz considers himself a semi-professional runner these days and hopes to secure a sponsorship while in Arizona. Since arriving in Flagstaff, he’s been training nearly every day and has found the community he sought.

“Because of the prevalence of runners here, it just makes it so easy to do,” Schultz said.

Barnes moved out west with her husband to pursue her PhD at Northern Arizona University, which, not coincidentally, boasts one of the best men’s cross country teams in the United States. For her and her husband, an avid cyclist, living in a place like Flagstaff was vital to their active lifestyle.

Barnes especially loves Flagstaff’s sun-soaked summers and the ability to drop down to lower elevation to train when winter storms roll in.

Barnes has goals of securing a sponsor, too, but less than a year after moving to, as she calls it, “this little, tiny 7000-foot dot in Northern Arizona,” the native Kansan is happy with the footing she’s gained in Flagstaff.

“Being here 10 months, I feel like I’ve known the running community for years, which is really cool,” Barnes said. “Something I valued is having a team and a community that supports each other, and I feel like this is a team here.

“Even though we’re all competing for separate teams, separate coaches, separate brands, I think we all, once we travel away from Flagstaff and go compete, we’re all supporting each other.”

As Schultz and Barnes attempt to improve their times and join the ranks of professional distance runners, both are coaching young runners. It’s something the Flagstaff transplants seem to genuinely enjoy.

“I think the best success I’ve found in running has been when I’ve been balanced and when I valued things outside of running,” Barnes said. “If I can show that to other generations of younger women or men, whoever that may be, that would just be such a joy.”