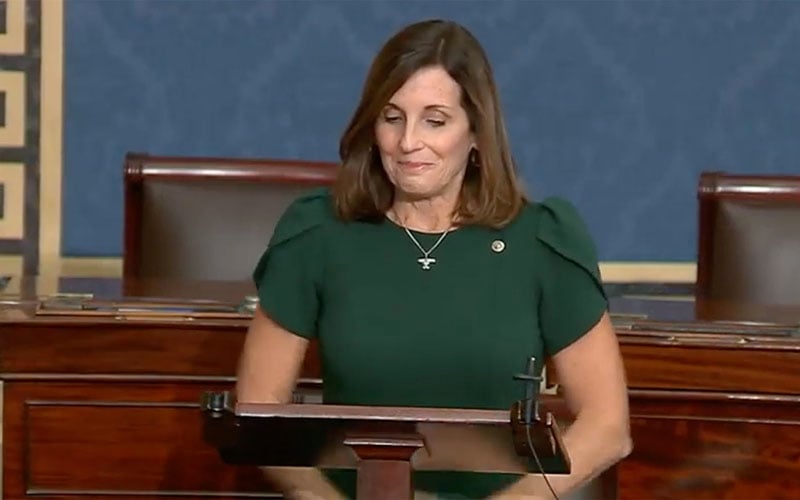 Sen. Martha McSally, R-Arizona, choked up once or twice during an emotional farewell on the Senate floor in which she said “serving and fighting for Arizona as a U.S. senator has been the opportunity of a lifetime.” McSally could be replaced by Democrat Mark Kelly in as little as two weeks, pending certification of this month’s election results. (Photo courtesy Sen. Martha McSally’s Office)

WASHINGTON – A sometimes emotional Sen. Martha McSally, R-Arizona, gave her farewell address on the Senate floor Wednesday, saying that “serving and fighting for Arizona as a U.S. senator has been the opportunity of a lifetime.”

McSally also wished “all the best” to Sen.-elect Mark Kelly, the Democrat who unseated her in this month’s elections and could replace her in less than two weeks when the election results are due to be certified.

“It’s been a true honor Arizona. We are an extraordinary state with extraordinary people,” said McSally, whose voice caught more than once and who had to pause and collect herself before settling in to her roughly 14-minute speech.

Between thanking her staff, and quoting the Bible, McSally highlighted what she called her bipartisan record in Congress and expressed gratitude for the “life-changing opportunities here” to work for “causes greater than one’s self.”

McSally, a former Air Force fighter pilot who served two terms representing the Tucson area in the House, ran in 2018 for an open Senate seat but lost to Democrat Kyrsten Sinema. Gov. Doug Ducey appointed her shortly thereafter to fill the seat left vacant by the death of Sen. John McCain, R-Arizona.

It was the first time Arizona has had two women in the Senate, but it would not be for long: Because she was only filling McCain’s seat, McSally had to stand for election at the next general election, this year.

Her loss to Kelly gives Arizona two Democratic senators for the first time in almost 70 years. But Kelly will have to stand for re-election in 2022, what would have been the end of McCain’s term.

McSally thanked Ducey for the “blessing to serve the great state of Arizona, especially during these times of unprecedented challenges.”

She said that despite the “dysfunction” in Congress, she worked “tirelessly to seek common ground, to find pragmatic solutions that make a real, tangible difference in people’s lives.”

Reflecting on her two years as the junior senator from Arizona, McSally shared her pride in fighting for “our military heroes.” She cited the memorable experience of ride-alongs with Border Patrol and local police, of touring the border wall with ranchers, of meeting four Navajo Code Talkers and of interacting with so many “inspiring Arizonans.”

She also praised communities and universities for stepping up for each other during the pandemic.

McSally choked up when she spoke of being a survivor of sexual assault while in the military – a story she first shared publicly during a Senate hearing on assault in the military.

“I am grateful to God for giving me the courage to tell my story and I’m blessed to be a senator, not only to lead on reforms that were signed into law, but also to use my platform to be an example of hope and healing for others,” she said.

Her loss came at the end of the most-expensive Senate race in state history – Kelly raised almost $89.8 million to McSally’s $56.9 million, according to Federal Elections Commission reports – and a divisive presidential race that saw Arizona vote for a Democratic presidential nominee for the first time in decades.

McSally said she is unsure of what is next for her, but encouraged her Senate colleagues to continue to “fight the good fight” and left the Senate floor to a round of applause from the other senators and staff.

“As I make the trip back home from D.C. to Arizona for the last time, and close out this nine-year chapter of my life, I do so with gratitude, with joy, and with no regrets,” she said.