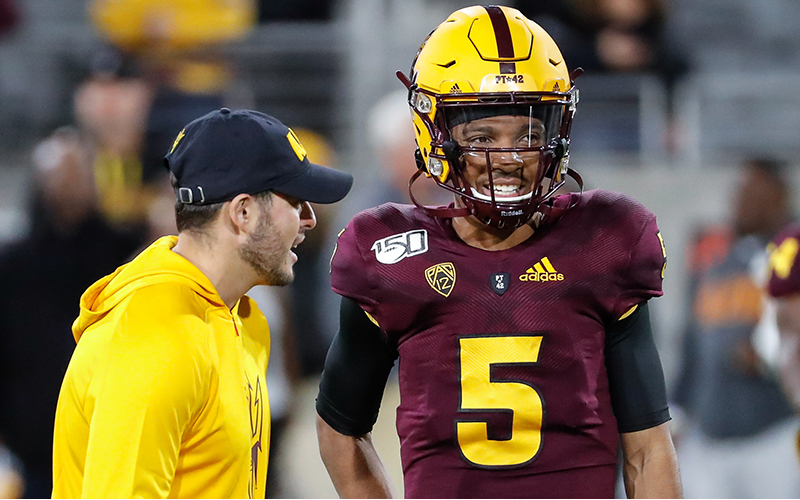 Arizona State quarterback Jayden Daniels and the Sun Devils face an uncertain path because of canceled games due to the coronavirus. (Photo by Kevin Abele/Icon Sportswire via Getty Images)

TEMPE – During a sports year when news of a game cancellation can arrive at the last minute – especially in the scrambled Division I college football season – the Pac-12 Conference took the unusual step Sunday of canceling a football game nearly a week in advance.

In a statement on Twitter, the conference said it had, “after consultation with Arizona State University, canceled the Arizona State at Colorado football game scheduled for November 21.” The conference attributed the cancellation to ASU’s inability to field the required number of scholarship players for the game.

The Sun Devils had already canceled their Nov. 14 game against California due to the outbreak.

While Arizona State has not released active COVID-19 case numbers for the football program, ESPN college football studio host Matt Barrie reported the situation was dire and that “an entire side of the ball” had been infected with COVID-19.

The situation within the ASU football program is dire. The facility is closed. An entire side of the ball has it. 6-staff members are positive. And they’re just at the beginning of the outbreak. When asked to describe it I was told: “This is bad. Really, really bad.”

Coach Herm Edwards is among those who tested positive for the virus.

The back-to-back cancellations, coupled with a heartbreaking season-opening loss to Southern California, leave the Sun Devils with an uncertain path to the postseason. But perhaps not an impossible path.

While the cancellations of at least two games could affect ASU’s chances of playing in the Pac-12 Championship Game as well as a potential “Champions Week” matchup during the final week of the season, the Sun Devils’ future could depend on how many other games are shelved or rescheduled around the Pac-12 due to the virus. For instance, California was able to hastily schedule a game against UCLA on Nov. 15 to replace the ASU game. Utah had canceled its game with UCLA on Nov. 14.

Under the Pac-12’s revised division tiebreaker rules for 2020, the winner of each division will be decided by winning percentage, both divisional and cross-divisional.

However, if a team has not played six conference games, which is likely to apply to ASU unless a game is rescheduled, a team must have played “no less than one fewer conference game than the average number of conference games played by all conference teams (rounded up/down at .50)” to be eligible for the championship game.

In essence, if the Pac-12’s teams average fewer than 5.5 games played during the regular season and ASU is able to play its remaining three games, the Sun Devils would still be eligible for the Pac-12 Championship.

If an unbalanced schedule exists with a tie for the best record in the loss column, “head-to-head results will take precedence over winning percentage,” according to the conference.

Still, ASU’s chances might be no better than mathematical. USC and Colorado currently lead the Pac-12 South, each with a record of 2-0. And USC would own the head-to-head tiebreaker over ASU thanks to its 28-27 win over the Sun Devils on Nov. 7.

Meanwhile, the Sun Devils are taking steps to return to play.

Ray Anderson, ASU’s vice president for university athletics, said in a statement that the Sun Devils would “continue to monitor testing results and stay in close communication with our university, local public health officials and the Pac-12 Conference.”

“We have consulted with the conference and Colorado officials and have decided to make this prompt announcement so alternative scheduling options can be considered in the overall interests of the conference and our peer student-athletes and coaches,” Anderson’s statement said.

Anderson noted that the group of players ruled out of competition comprised those who had confirmed COVID-19 cases and players who had been in close contact with teammates or coaches who tested positive. Reports have pegged the number of positive cases among players at over 10. Half of the coaching staff has also reportedly tested positive, including Edwards.