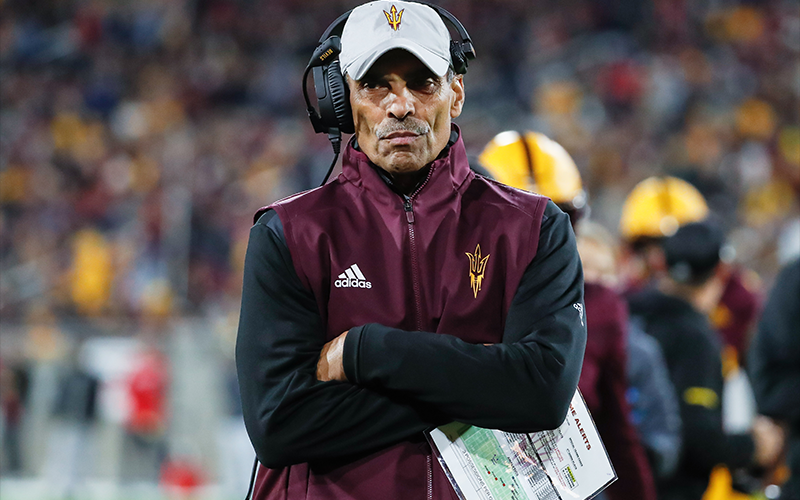 Arizona State coach Herm Edwards is among those on the ASU football team who tested positive for COVID-19. It led to the cancellation of Saturday’s football game against California. (Photo by Kevin Abele/Icon Sportswire via Getty Images)

PHOENIX – Arizona State football coach Herm Edwards has described the coronavirus as the “opponent you can not see” that teams have to prepare for many times this season.

Unfortunately, that invisible opponent has made its way to him and his team.

Arizona State’s football game scheduled for Saturday versus California was canceled Friday because multiple ASU players and coaches, including Edwards, have tested positive for COVID-19. This is the third Pac-12 game that has been canceled this season, and one of many across college football.

This week’s number of positive cases among players put the team “below the Pac-12’s minimum threshold of 53 available scholarship student-athletes,” which allowed ASU to invoke the conference’s cancellation policy.

“The cancellation of a game is very difficult to accept for all of us, but it is the right decision under the circumstances,” Ray Anderson, vice president of university athletics, said in a statement Friday. “In every case, we continue to consider the health, safety and welfare of student-athletes as our number one priority.”

Edwards seemed to be in good spirits, writing in the statement that he would be back “quicker than you can say ‘Forks Up!'” However, he reminded people to “take this virus seriously,” saying that “Even with the marvelous care our medical professionals have provided for myself, my staff and my team over the past few months, the virus still found me.”

“The cancellation of this game is very disappointing to our student-athletes and our fans,” the Pac-12 Conference wrote in a statement Friday. “At the same time, it is further indication that our health and safety protocols are working in identifying positive cases and contact tracing cases.” 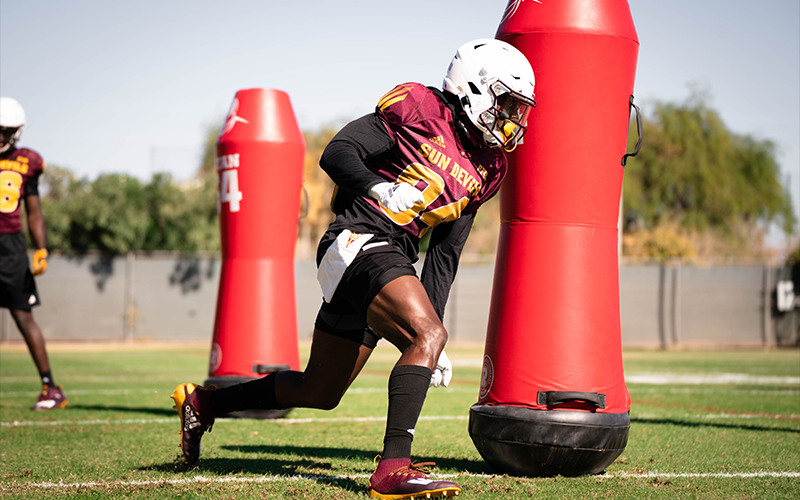 Frank Darby and his fellow Sun Devils were looking forward to taking on California on Saturday. Questions remain about whether ASU will be able to play next weekend’s game against Colorado. (Photo courtesy Sun Devil Athletics)

Before news about positive cases from ASU broke, the status of Saturday’s game was already up in the air because of a previous COVID-19 case at Cal. The Bears’ opening game versus Washington was canceled because the team’s entire defensive line group had to quarantine after a player tested positive for COVID-19.

According to a statement from the city of Berkley, California, on Tuesday, Cal was “made aware” of when the player who tested positive “will end their isolation period” and “for when the contacts will end their quarantine,” a claim Cal coach Justin Wilcox disputed in a news conference Tuesday.

“I was told by university, our athletic administration, we would know something by Wednesday,” Wilcox said. “That came from the public health office and the representatives here on campus to public health.”

The reported update Cal should have received Wednesday never came, nor did it come Thursday. Both teams still prepared for the game as if it would be played.

More than 60 college football games have been postponed or canceled due to COVID-19, according to tracking from CBS Sports. Arizona’s matchup with Utah last week was one of the three games in the Pac-12 that have been canceled because of COVID-19.

The cancellation of the Cal game now pushes ASU’s home debut to Nov. 28 against Utah. The Pac-12 schedule doesn’t include weeks to make up canceled games.

ASU’s next game at Colorado, scheduled for Nov. 21, may be up in the air due to local health guidance and depending on how many players tested positive for COVID-19.

According to guidance from the Arizona Department of Health Services, people do not have to isolate if they test negative for COVID-19 and are asymptomatic. Those who test positive and are symptomatic should isolate for 10 days from the onset of symptoms and 24 hours without a fever or using fever medication.

Edwards reiterated that “the health, safety and well-being of our student athletes is absolutely paramount and we will not put them at risk.”

The U.S. continues to break daily coronavirus case records with winter looming. The country recorded more than 150,000 cases Thursday, a record high, according to the COVID Tracking Project.

With COVID-19 cases on the rise throughout the country, the Pac-12 season, and others across the country, may be at risk of not being completed. The SEC canceled four games this week, but conference officials are attempting to reschedule them.