Even after President-elect Joe Biden called for unity Saturday night, Arizonans remained divided as they awaited a final vote count in the state. (Photo by Carolyn Cole/Los Angeles Times via Getty Images) 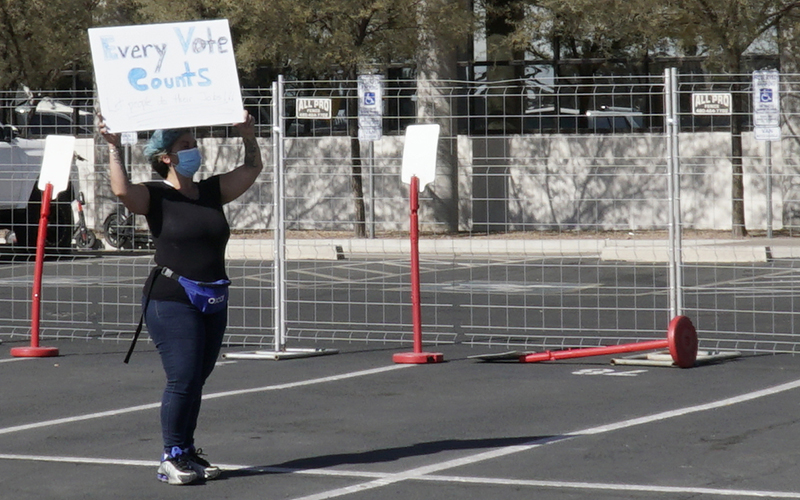 A rare quieter moment outside the Maricopa County Tabulation and Election Center in Phoenix this week. For the past several days, throngs of mostly Trump supporters have gathered outside the center and at the state Capitol to protest what they claim is a rigged election. (Photo by Franco LaTona/Cronkite News)

PHOENIX – Amid celebrations on one side and vows to keep fighting on the other, Arizonans on Sunday awaited final vote counts even as President-elect Joe Biden claimed a “clear victory, a convincing victory” and began making plans for the next four years.

Biden and Kamala Harris, making history as the first woman and first woman of color elected vice president, held a boisterous drive-up victory party Saturday night in Wilmington, Delaware, with both pledging to represent all Americans, regardless of party, in the years ahead.

But election results nationwide, and so far in Arizona, have shown just how split the nation is – and that division remained evident five days after Election Day 2020. 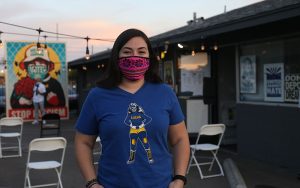 “Yesterday and today, I felt peace for the first time,” Biden supporter Alejandra Gomez of Phoenix says. Celebrations and protests erupted across the nation after former Vice President Joe Biden was projected the winner of the 2020 election. Gomez says she’s ready to build a “multiracial democracy.” (Photo by Daja E. Henry/Cronkite News)

Gomez is co-executive director of the Arizona organization LUCHA, an advocacy group for Hispanics and other people of color. She said she’s ready to work with a new administration “to build that multiracial democracy that is so needed and that we saw delivered in this historic election.”

Navajo Nation President Jonathan Nez said he, too, hopes to see more people of color and Native Americans, in particular, with a seat at the table going forward. In an interview with Cronkite News, Nez said he’d like to see a tribal leader appointed to the Biden transition team.

COVID-19 has hit Indian Country especially hard, and Nez said he believes Native American leaders could use what they’ve learned to help guide the nation through the crisis.

“I think Navajo could give some insight on how to handle this pandemic throughout the United States,” Nez said.

At the other end of the spectrum, Trump supporter Lloyd Rathburn had a two-word response about the outcome of the presidential election: “Not happy.”

“Us Republicans, we’re in mourning,” he said. “We had hope with President Trump. And now: Where’s our hope?”

Under Trump, the 63-year-old bartender said, “My stocks have gone … through the roof. I get close to retirement, everything’s looking up. But now, I don’t know what to expect.”

Trump has not conceded, and he and his allies continued to press unproven allegations of potential voter fraud. In addition to court actions in states such as Pennsylvania and Nevada, they also are challenging Arizona’s vote count. 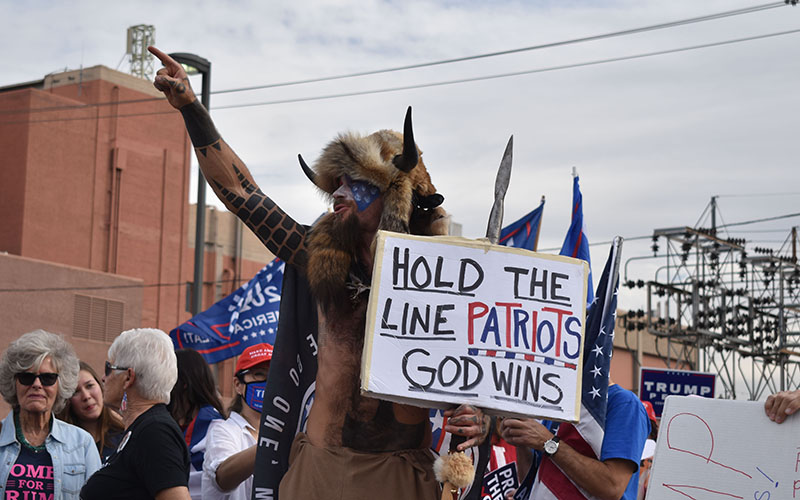 Jake Angiel wears fur with horns during one pro-Trump demonstration last week. Hundreds of people have been gathered daily outside the Maricopa County Tabulation and Election Center as the vote counting continues. (Photo by Hope O’Brien/Cronkite News)

The complaint alleges that in cases where voters accidentally marked their ballots for more than one candidate in the same race, what’s known as an “overvote,” their ultimate choices were disregarded instead of corrected.

Sophia Solis, a spokeswoman for Secretary of State Katie Hobbs, said the office was still reviewing the lawsuit but that it appeared to have no merit. Megan Gilbertson, communications director for the Maricopa County Elections Department, said the agency cannot comment on pending litigation.

Sunday evening, election workers statewide were still working their way through some 80,000 outstanding ballots, including about 38,000 in Maricopa County, and counting could continue for several more days.

“Staff is also still working through mismatched signatures and has been contacting voters” if there are questions, Gilbertson said in an email. Voters who did not bring the correct ID to the polls, or whose signatures are in question, have until 5 p.m. Tuesday to remedy the situation.

At 5 p.m. Sunday, Biden led Trump statewide by about 17,000 votes. Nationally, though, Biden was declared the expected victor by media outlets based on analyses of votes counted.

Since when does the Lamestream Media call who our next president will be? We have all learned a lot in the last two weeks!

For the past several days, crowds of mostly Trump supporters have gathered outside the Maricopa County Tabulation and Election Center in Phoenix to protest the process. Others demonstrated over the weekend outside the state Capitol.

Joaquin Enriquez, a spokesman for the Maricopa County Sheriff’s Office, said there had been no citations or arrests.

“There has been some tension at times, but we were able to … diffuse those situations,” he said. “Everybody needs to keep in mind that everybody has the right to be there, they have the right to voice their speech. However, everything needs to be done with respect … and in coordination with the law.”

With COVID-19 cases rising in Arizona and across the U.S., several Biden and Trump supporters said they planned to stay away from any in-person celebrations or protests.

“I’m celebrating physically distanced from my loved ones because I want to keep our family and community safe,” Gomez said.

“Watching it on TV is good enough for me,” added Adina Werner of Surprise.

Werner voted for Trump and admitted being disappointed with the outcome, but she said she had watched pieces of Biden’s speech and was trying to remain optimistic about the future.

“We’re a little nervous on the direction that he’s planning,” she said. “But … we’ve been through many presidents that are good, some that are not so good, and we always manage to come out on the other end.”

And if not, she added, in four more years, “We get the opportunity to change it if we don’t like the way it’s going.”

“Knowing Trump,” she said, “he’s going to fight … until there’s no fight left. So I think we’re still going to be dealing with this for the next week or so. But as far as our individual lives, we just keep going to work and keep doing our thing and see what happens.” 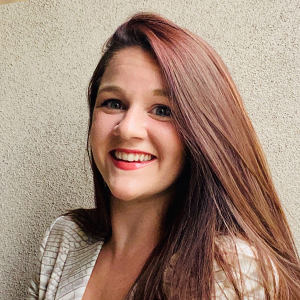