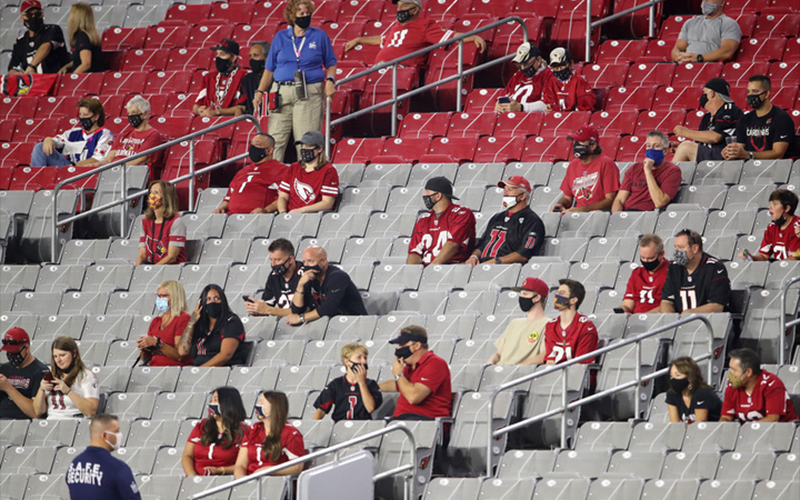 Approximately 1,200 fans were able to attend the Arizona Cardinals’ game against Seattle. They were assigned specific seats and asked to socially distance. (Photo by Christian Petersen/Getty Images)

When the Cardinals beat the previously undefeated Seattle Seahawks in a 37-34 overtime thriller on Sunday night, they were able to do so in front of 1,200 fans.

The COVID-19 pandemic has forced new norms, including fanless sporting events. The Cardinals played their first home games in an empty stadium or in front of a small group of selected family and friends. Last game, that changed.

Sunday’s game was the largest attended professional game in Arizona since March, when athletic teams and events around the world shut down because of the coronavirus. The Phoenix Rising, in the midst of a spectacular postseason run, have recently allowed 1,000 fans to attend home games in person.

Arizona native Kimberly Weeldreyer was one of the limited fans in attendance at Sunday’s Cardinals’ nail-biter. Her husband has been a season ticket holder for over 20 years. 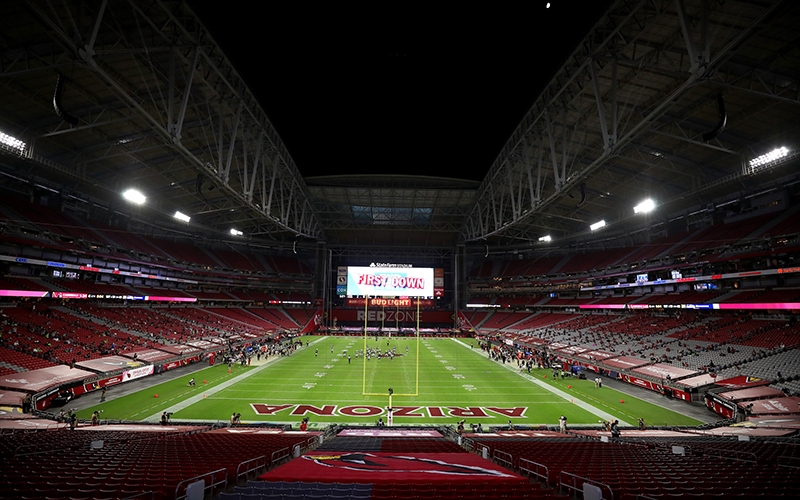 The pandemic has caused State Farm Stadium to look a little different on game day. This was the scene at the Arizona Cardinals and Seattle Seahawks game Sunday. (Photo by Christian Petersen/Getty Images)

“We’re so glad that we were able to be part of it actually and be in person,” she said. “Even though it was a long night, it was worth it.”

The Arizona Department of Health Services approved the Cardinals to expand the number of fans to 4,200 for each of the next two home games, the team announced Thursday, even though the state has seen an uptick in cases recently. AZDHS, reported 1,565 new cases and 16 deaths Friday.

In the Cardinals’ press release on Sept. 22 announcing family and friends attendance, Arizona Department of Health Services director Dr. Cara Christ said the state was at a “moderate” COVID transmission rate and added that “it is not recommended to allow fans at games until Arizona reaches the ‘minimal’ category.” That day 632 new cases were recorded.

Some fans felt lucky to be at Sunday’s game.

Based on their seniority as season ticket holders, the Weeldreyers were sent a link to purchase tickets shortly before the limited availability sold out. They were sent a QR code for their tickets and details of where to specifically park.

Only two tickets were allowed per purchase, and those two seats acted as their own pod separated from others, Weeldreyer said.

Things looked different from when she last attended a game almost a year ago. Zip ties locked empty seats, team dancers performed in masks away from the field and even the condiments at the contactless concession stands were prepackaged instead of dispensed from a pump.

After typical games, Weeldreyer said it usually takes 20 minutes to leave the stadium. Sunday night, she let out a chuckle when the video board read, “Traffic Report: There Is None.”

At less than 2% capacity of a stadium that can hold 63,400, it was much quieter than the rocking crowds to which Weeldreyer is accustomed. Friendly jarring between Cardinals and Seahawks fans was easily heard over the pumped in crowd noise.

The back and forth nature of the game kept things interesting between the competing fans.

“Oh my God, I can’t believe that just happened,” could be heard after Budda Baker’s almost 98-yard interception return before Seattle’s D.K. Metcalf chased him down.

Weeldreyer heard, “I thought you were gonna win!” after the missed field goal by the Cardinals’ Zane Gonzalez in overtime.

After attending games consistently for years, she and her husband became friendly with players. While she wasn’t in her usual seats, the softer volume allowed her to track down her favorite player Patrick Peterson. She called out his name and he waved in response.

Cardinals’ senior broadcasting producer Jim Omohundro said he saw players motioning to fans through the muted noise levels. The intimate setting may have been strange for fans, but they’ll certainly have a story to tell, he said.

“I could tell, just looking out the window of our radio booth, that people were excited to be in attendance,” he said. “It was fun to see our fans having a great time and that they were able to see such an entertaining game.”

Several rows above the sparse crowd is the press box, where Arizona Republic reporter Katherine Fitzgerald analyzed the scene while also keeping track of plays and statistics for the article she’d file soon after the game ended. Fitzgerald has covered games packed with fans, limited fans and no fans.

The environment is so different without fans, at times she had to remind herself to stay focused on the game.
“Just being very in person and seeing how low energy it is,” she said. “It’s bizarre.” 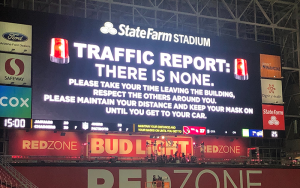 During the Arizona Cardinals’ game against Seattle, the team posted a light-hearted message to fans addressing the small attendance. (Photo courtesy Kimberly Weeldreyer)

Separated from the fan section by a thick layer of glass, the press box is normally blocked from a lot of sound during typical games, but it’s so much spookier now, Fitzgerald said.

Usually on game days the Republic reporter pulls into State Farm Stadium and takes in the scene of fans tailgating and listens to whatever is playing on the Great Wall. This season the lots are nearly empty, and everyone parks at least six feet away from other vehicles.

Gone are the days of buffets in the media dining room. Often the open bins would be filled with freshly made eggs and sausage, along with assorted hot food. Now the media is offered prepackaged meals in a brown paper bag that includes a sandwich, chips, cookies and a salad.
Reporters no longer have direct contact with players or coaches. Locker room interviews where media members scrum together sticking mics and cameras in front of players are prohibited in the age of COVID.

After the game, those covering the team remain in the press box and jump on a Zoom call to ask their questions. Fitzgerald said it’s always strange hearing a fellow reporter through her headphones in the video conference as well as the echo of the person being a mere six or so feet away.

“That’s been the hardest part for me, to be candid, is not having that face-to-face reporting time,” she said. “Not having that relationship of being able to just walk up to someone and ask questions and pick their brain.”

Despite these obstacles, she said the changes are very necessary measures for everyone’s safety.

Omohundro has worked in the Cardinals’ radio booth for over 20 years. He’s watched moments like the 2008 NFC championship game where the Cardinals defeated the Eagles punching their ticket to the Super Bowl, he said that’s his favorite moment, and fanless games.

“Plain and simple, there is no atmosphere. We have to manufacture it,” Omohundro said. “It’s surreal.”

That atmosphere is even harder to foster for road games. The radio crew packs into a completely empty State Farm Stadium and calls the games from two 60-inch monitors.

No fans means the broadcasters can’t tap into the crowd’s spirit. Omohundro said announcers feed off of fans’ energy just as players do.
“It’s so much easier to let yourself go emotionally when 70,000 other people are losing their minds right along with you,” he said.

Before the limited number of fans could attend the game in person, the Cardinals had to receive clearance from the Arizona Department of Health Services. In their second home game against the Lions on Sept. 27, the team allowed 750 friends and family with similar safety protocols in place.

Fitzgerald said it was a good step to allow family and friends in first because they probably had some sort of contact with those around them. She noted that the multiple early road games allowed the Cardinals to conceptualize and coordinate a safe plan to allow additional fans in the building.

The pandemic infringed on everyone’s lives, and there’s no better way for fans to release frustrations than screaming for their favorite team, Omohundro said.

“Whenever the time comes for a full house, I expect it to be emotional and inspiring for everyone,” he said.

Weeldreyer said the Cardinals do a good job of maintaining cleanliness and good customer service outside a pandemic, so it didn’t surprise her that everything went smoothly.

“Everything was very well organized and clean, and we felt safe,” she said.

Security ensured that everyone complied with the masks policy. It was very controlled, Weeldreyer said. She didn’t see security having to remind many people to wear their masks, mainly just kids who didn’t put it back on after eating.

Looking down from the radio booth Omohundro said he could tell that fans were excited to be in attendance.

“It was fun to see our fans having a great time and that they were able to see such an entertaining game,” he said.

The ups and downs of the game matched the unusual circumstances. The Cardinals trailed for most of the game before Gonzalez’s 44-yard field goal as time expired sent it into overtime. Their defense managed to stop Russell Wilson’s offense twice, and then Gonzalez nailed the game-winner, this time a 48-yard field goal with 15 seconds left in overtime, after Arizona coach Kliff Kingsbury had iced his own kicker earlier in the OT.

“We had a few heart attacks and were revived again on multiple levels,” Weeldreyer said.

The statement win improved the Cardinals to 5-2 in the tough NFC West, and pointed to a hopeful direction with the franchise after years of underperforming. While this early success hasn’t been shared with all their fans in person, Weeldreyer said she and her husband will keep going as long as the doors stay open.