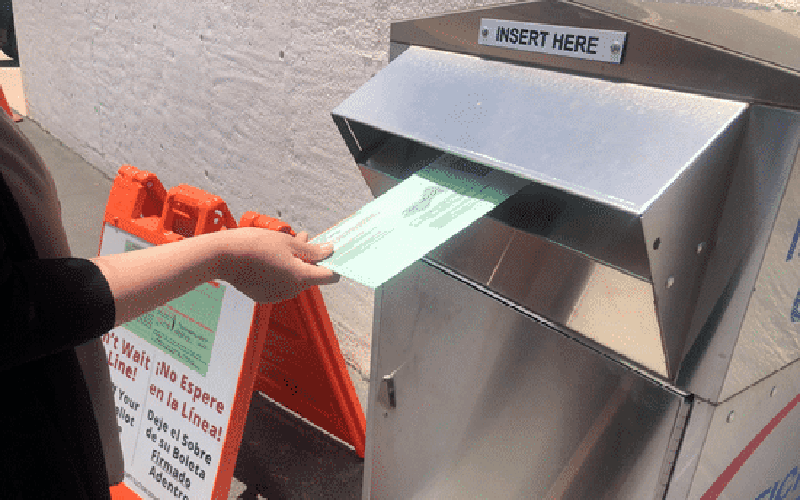 A voter drops off an early ballot at a Maricopa County drop-box. Early on, Democrats made up a large percentage of the record 2.3 million voters who have cast early ballots so far, but Republicans have narrowed the gap recently. (Photo courtesy Maricopa County Elections Department)

WASHINGTON – Arizonans are already setting voting records this year, driven by a bitterly contested presidential race, a large number of new voters and COVID-19 fears that voting in-person may not be safe.

With four days left until Election Day, state election officials had already received 2.3 million ballots Friday, closing in on the total 2.6 million that were cast in 2016. This year’s turnout is “the most people who have ever voted early in Arizona history,” said Paul Bentz, senior vice president of research and strategy for HighGround Inc.

There are 4.28 million registered voters in Arizona this year, according to the secretary of state’s office, 692,686 more than in 2016.

Maricopa County officials reported processing 1.5 million ballots as of Friday, and increases were being seen in swamped recorders’ offices across the state. Pima County had received 389,876 ballots by Friday, while Greenlee County, which only has 4,866 registered voters, had received early ballots from 2,166 of them by Friday.

“Obviously we have record numbers,” said Kim Challender, assistant chief deputy recorder for Pima County. On Wednesday, she said, “At this point as of yesterday, we had more early ballots returned and more early voters than any previous election … and we have a week to go.”

Turnout is not the only way 2020 has been unusual. Bentz said the number of Democrats voting early, especially younger voters, has reversed the usual pattern.

“In previous elections, younger voters and Democrats tended to vote a little later or drop off their ballots on Election Day, and there’s been a significant effort to activate these voters and get them to turn in their ballots early,” Bentz said.

Arizona Democrats were well ahead of Republicans when early voting first started, according to data compiled by Saguaro Strategies, but GOP voters have been closing the gap recently. By Friday, 885,474 Democratic ballots had been returned compared to 859,848 ballots for Republicans.

Bentz said that President Donald Trump’s “own messaging hurt his chances in Arizona when it comes to Republican early voters.” That trend has been seen in early voting in states across the country.

“There’s a portion of the Republican electorate that is holding on to their ballots so far,” Bentz said.

But Mike Noble, chief of research for OH Predictive Insights, said that could just mean a surge of Republican voters on Election Day. He said late votes could prove a challenge for recorders, to see “how quickly can they get those out and also if there’s discrepancies.”

Late voters could complicate things for recorders if they got an early ballot and then decide to vote in person on Election Day, Challender said.

County recorders were generally too busy this week to speculate on whether heavy early voting will lead to faster returns on election night: Counties in Arizona were allowed to begin counting early ballots on Oct. 20, two weeks before the election.

Some experts think that, with this many early ballots already being counted, returns could roll in quickly on Tuesday.

“We will have a significant portion of the vote already counted so that will have a pretty good idea of where things are on Election Day,” Bentz said.

Analysts and election officials attribute the nationwide surge in early voting to a high-profile presidential race, concerns about the Postal Service’s handling of electoral mail and concerns about how COVID-19 might affect in-person voting.

“Arizonans, like people everywhere in the U.S., are worried about COVID and so many people prefer to vote by mail or to vote early to avoid crowds on Election Day,” said David Lublin, chair of American University’s department of government.

“This election we’re definitely seeing a much higher percent of our voters wanting to vote early and I contribute that, you know, to the COVID pandemic,” Hansen said.

“The president is probably the best turnout mechanism we’ve ever seen,” he said, “people turning out to not only vote for him but against him.”