Supporters of President Donald Trump make their feelings known at a “Latinos for Trump” event in Arizona Veterans Memorial Coliseum in February. Recent polls show about one Latino voter in three supports Trump, about the same level of support he won in his 2016 run for president. (File photo by Reno Del Toro/Cronkite News)

WASHINGTON – Phoenix resident Rey Torres is “very happy to have been born into my culture” of a Mexican-American family – just don’t ask him if that means Democrats will be getting his vote this fall.

President Donald Trump has “respect for American jobs and … a laser focus on bringing jobs back to our country” among other positives, said Torres, a member of the Arizona Latino Republican Association.

Torres is not an outlier: A Pew Research poll from June found that 32% of Latino voters said they support Trump. An Equis Research survey released in September put support for the president among registered Latino voters in Arizona at 29%.

But while the polls showed some support for Trump, including growing support among young Latino men, they also reflect the fact that Latinos as a whole are still firmly in the Democrats’ camp.

“Generally speaking, Latinos have leaned towards the Democratic Party more than the Republican Party over the last 30 plus years,” said Mark Lopez, the director of global migration and demography research at Pew Research.

That was the case in 2016 when Trump won 29% of the Hispanic vote to 66% for Democratic nominee Hillary Clinton. But that was one of the narrowest gaps in years, despite Trump’s harsh anti-immigrant rhetoric during his first campaign.

Trump’s support among Latinos was highest for a Republican since Sen. John McCain, R-Ariz., won 31% of the vote in 2008. Only President George W. Bush got more support, earning 40% for his 2004 re-election bid.

Torres explains the shift by comparing Latino-Americans to other historical immigrant groups, like Italians or the Irish, who over time identify more as Americans than the country and culture many came from. 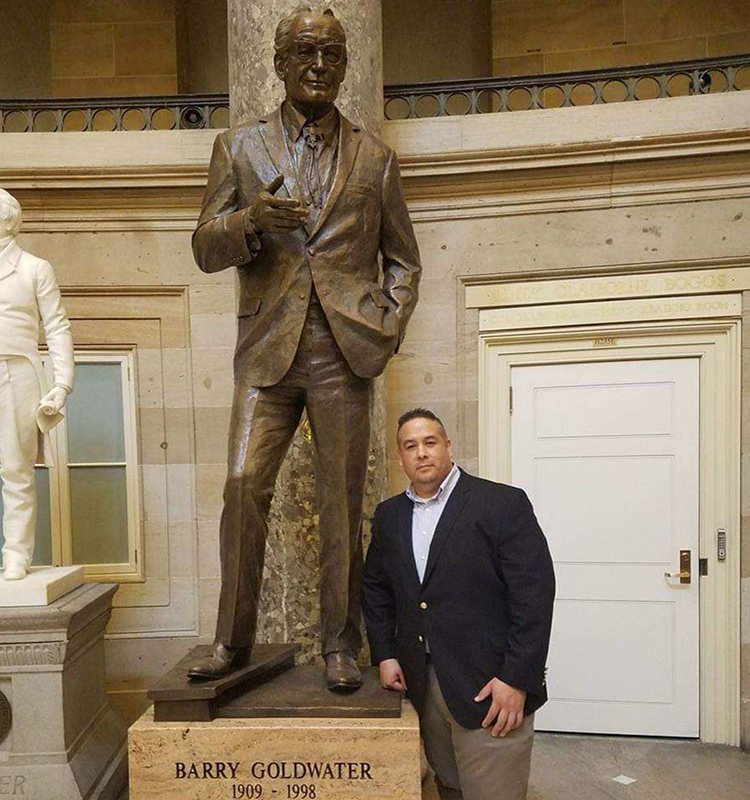 Phoenix resident Rey Torres, a member of the Arizona Latino Republican Association, poses with a statue of Arizona conservative icon Barry Goldwater. Torres is one of about 30% of Latino voters who said they plan to vote for President Donald Trump this fall. (Photo courtesy Rey Torres)

“Considering my family’s been here since 1915, we don’t identify as migrants. We don’t know any that are related to us,” Torres said. “So we definitely consider ourselves to be 100% Americans.”

As many Latinos become third- and fourth-generation Americans, they identify less as Hispanic and Latino, a Pew Research poll found in 2017. While more than 90% of the first two generations identify as Latino, the poll said, by the fourth generation only half think of themselves that way.

Third- and fourth-generation Latino-Americans want to drop ethnic designations from their identity and simply be known as Americans, Torres said. He said Latino immigration advocates are “enamored with the idea of what a Mexican is, what they perceive to be a culture that they don’t necessarily belong to but admire.”

Jose Patiño, who works with the Aliento Votes campaign in Arizona, agreed that third- and fourth-generation Latino-Americans often don’t feel a connection to the culture and heritage that earlier generations did.

“As more generations come forward some of the language is lost from the previous generation,” Patiño said. “They get a little bit farther away from their culture, the culture of their parents.”

The Equis Research report also found notable differences in Latino support for the 2020 presidential candidates by sex, with both younger and older women having broader support for Biden. But 42% of young Latino men support re-electing Trump, with the next-highest support among older men at 34%.

That does not surprise Stephen Nuño-Perez, a senior analyst at Latino Decisions, given the Trump administration’s masculine policy approach.

“Men are generally more receptive to patriarchal policies,” said Nuño-Perez. “I’m not surprised that men in the Latino community are receptive to those kinds of overtures to masculinity, overtures of nationalism.”

That’s true of men of any race, Nuño-Perez said. There’s no more masculinity in Latinos than there is in white or Black populations, he said.

Lopez noted that Hispanic men are less likely to finish college than women, an education gap that may also influence voting preferences.

The top issue for Latinos in this election cycle is the economy, Pew found. Latinos are more likely to be found in service sector jobs and have been hit hardest by job losses and the coronavirus.

That’s just one of the reasons Torres believes Trump deserves a second term.

“He has ingratiated himself in a way that has shown results, unlike any campaign in the last 20 years,” Torres said.