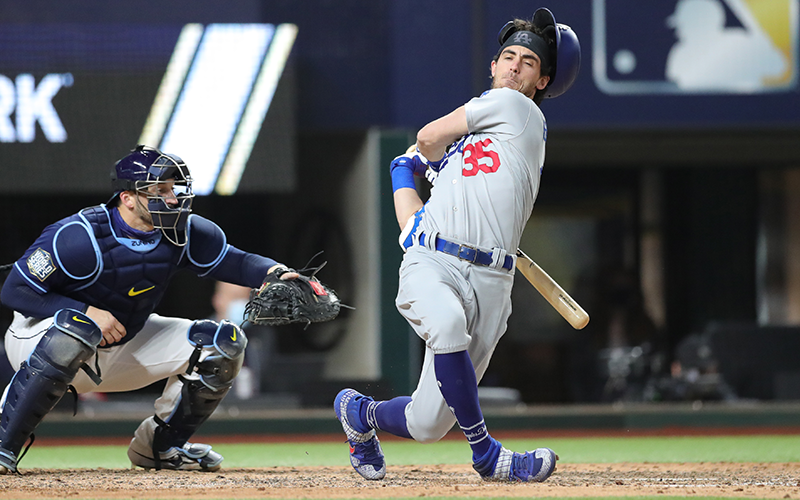 The Los Angeles Dodgers Cody Bellinger got his start at Hamilton High School and now finds himself in the World Series. (Photo by Ronald Martinez/Getty Images) 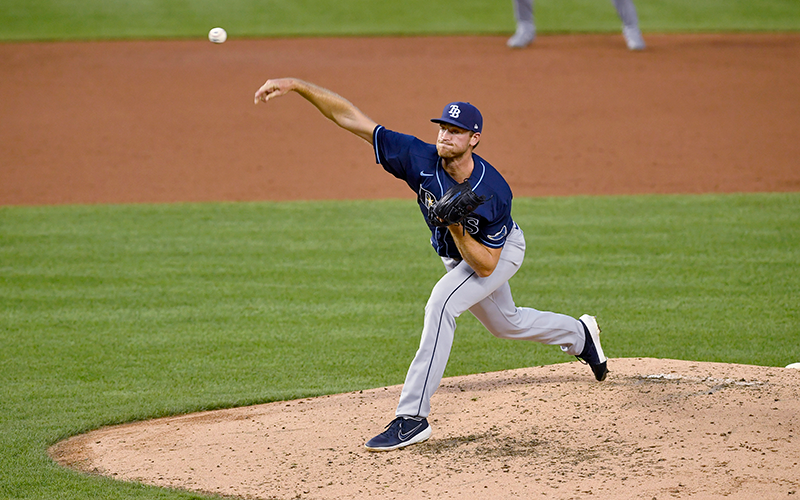 Although he didn’t make the active World Series roster for the Rays, Notre Dame Prep product Aaron Slegers is thrilled to have helped his team get there. (Photo by Sean M. Haffey/Getty Images)

PHOENIX – Two Valley natives are representing teams on opposite sides of the World Series this year.

Cody Bellinger of the Los Angeles Dodgers, who was born in Scottsdale and attended Hamilton High School, is no stranger to the big stage, batting his way to a third Series appearance at the ripe age of 25.

“You know, it sounds crazy, but it’s nothing new. … At this point there have been so many great moments, it’s hard to keep them straight,” said Mike Wood, Bellinger’s coach throughout high school.

“He keeps surprising us and we keep enjoying watching him.”

Aaron Slegers, the Notre Dame Preparatory graduate who pitches in relief for the Tampa Bay Rays, is experiencing his first trip to the Fall Classic.

“I’m just grateful that he’s been able to get to this level,” said Christie Slegers, Aaron’s mother.

“How many make it to play in Major League Baseball or minor league baseball? It dwindles and dwindles down (at each level) and so you’re just grateful that he’s been able to get to that.”

Bellinger hit the game-winning home run in Game 7 of the NLCS against the Atlanta Braves, a go-ahead blast in the seventh inning that gave the Dodgers a 4-3 win and sent them to their third World Series in four years. His post-game celebration was so raucous, Bellinger’s shoulder popped out of its socket and had to be adjusted afterward in the training room.

While Slegers, 28, is not on the active World Series roster for the Rays, the right-handed relief pitcher added more depth to the team’s bullpen this season. He pitched 4.3 innings in the postseason, allowing only one run. If the underdog Rays pull off a comeback for the ages and beat the favored Dodgers, Slegers will have earned his first World Series ring.

It may not look like it now but both Christie Slegers and Woods said the boys were not All Stars growing up. They just worked hard and loved to play baseball.

“He (Bellinger) was a late bloomer physically, when he was a freshman. He wasn’t very big,” Woods said. “It took him a couple years in high school. He wasn’t all that right away. He wasn’t always the big star on the team.”

Slegers, meanwhile, said her son, while always taller than most of his peers, had to wait for his skills to catch up with his height.

“He did not develop as quickly … there were people that were stronger than him at the time when he was younger,” she said. “They could always hit balls further than him or run faster than him, so at that point, growing up it was not like he was always the best.”

Both Bellinger and Slegers also faced arm injury setbacks in high school, causing them each to miss one full season.

“Between junior and senior year (Aaron) had huge separation from his right arm to his left shoulder, in regards to growth plates,” Christie Slegers said.

“He didn’t pick up a baseball for a year, that was what was recommended (by doctors), he was shut down.”

Bellinger’s father Clay is a former professional baseball player who won two World Series rings as a member of the New York Yankees. After he retired, he became the assistant coach of his son’s Chandler Little League team that advanced to the 2007 Little League World Series. Injuries struck the younger Bellinger early in his high school career.

Fortunately the two were able to jump back into baseball after their injuries healed and have accomplished quite a bit since their teenage years. 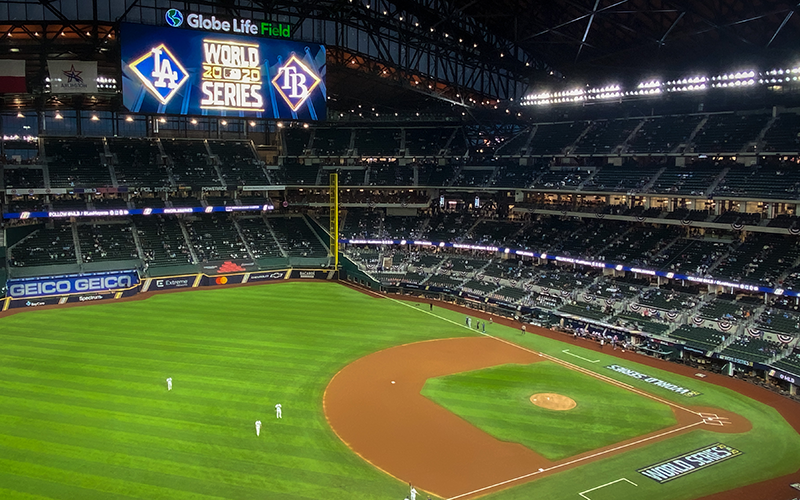 For the first time since 1944 for the entirety of the World Series, the teams have played at one site. MLB’s newest ballpark, Globe Life Field in Arlington, is home of the Texas Rangers. (Photo by Cierra Luna/Cronkite News)

Bellinger was the Rookie of the Year in 2017 and in 2019 won the National League Most Valuable Player, all with the Dodgers, the team that drafted him in the fourth round in 2013.

After making the Indiana University baseball team as a walk-on, Slegers was named the Big Ten Pitcher of the Year in 2013 and also pitched for the Hoosiers in their first College World Series appearance. Selected in the fifth round of the 2013 MLB draft by Minnesota, Slegers bounced around the Twins’ organization before being claimed off waivers in January 2019 by Pittsburgh, but was traded two months later to the Rays.

Both players now have fans across their hometowns rooting for them.

“I probably have gotten every day like 40 or 50 texts or emails from people every day,” she said. “Everything he’s done for baseball has been based in Arizona. So that’s been a neat thing.”

Woods, the Hamilton coach who has known Bellinger since he was a kid on the Scottsdale sandlots, said watching his former player on the big stage never gets old.

“It’s a great feeling. I mean, everyone, myself, everyone who knows him kind of takes a little ownership and we’re just proud of him,” Woods said.

“I’ve watched him almost every night… so I hope he gets to experience the World Series victory.”

That could happen tonight when the Rays and the Dodgers face off in Game 6. The Dodgers lead the Series, 3-2, but as the two players with strong Valley roots have shown, baseball can be so very unpredictable. 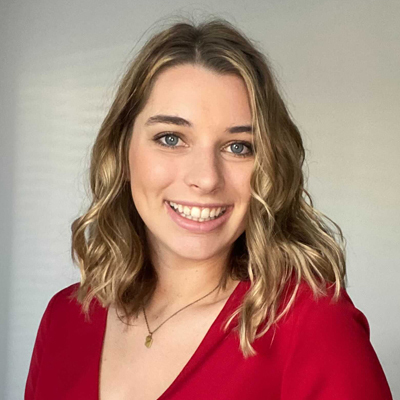 Sarandon Raboin expects to graduate in May 2021 with a bachelor’s degree in sports journalism and a minor in Spanish. Raboin, who has worked for Phoenix Magazine and Sports360AZ.com, is working as a producer for Cronkite Sports and is a member of the innovation squad. 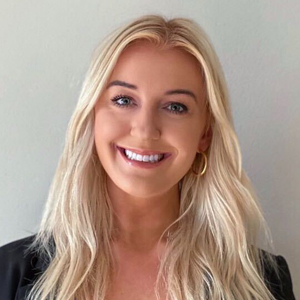 Lauren Shirley is a native of Vancouver, Canada, who expects to graduate in December 2020 with a master’s degree in sports journalism. She is focused on digital audience content and sports broadcasting.