Rep. David Schweikert, R-Fountain Hills, has faced relatively easy re-election bids since he was first elected in 2010. While he still has the advantage of incumbency in a largely Republican district, he faces a well-funded Democratic challenger this fall. (File photo by MacKinley Lutes-Adlhoch/Cronkite News) 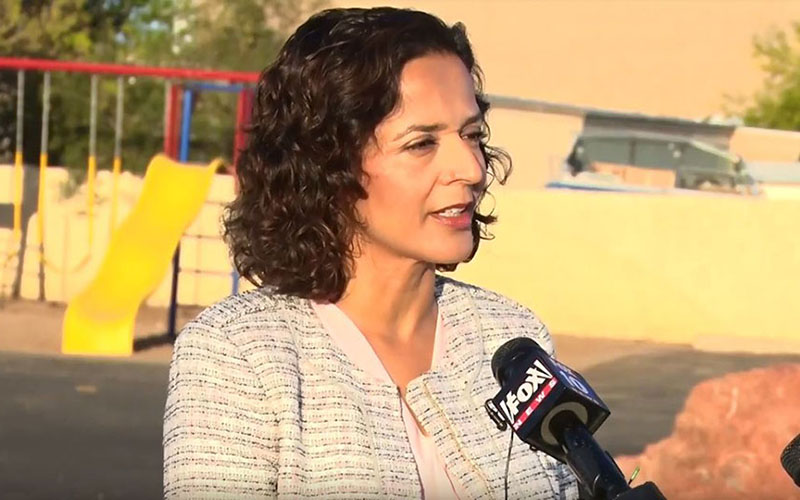 Democrat Hiral Tipirneni, shown here after a failed race for Arizona’s 8th District seat in 2018, has since mounted an aggressive challenge to 6th District Rep. David Schweikert, R-Fountain Hills. Tipirneni has raised $4.9 million for her campaign, compared to just under @2 million for Schweikert. (File photo by Sydney Isenberg/Cronkite News)

WASHINGTON – A national Republican campaign official expressed confidence Wednesday that Rep. David Schweikert, R-Fountain Hills, can fend off a challenge from Democrat Hiral Tipirneni, who leads in some polls and has raised millions more for her campaign.

But national analysts say Schweikert, reprimanded and fined $50,000 this year for House ethics violations, is in “extremely deep trouble.”

“Gone are the days when Democrats barely touched Schweikert in 2016 and 2018. This was a recruiting failure on the Republicans’ part, and now Tipirneni has raised millions of dollars while Schweikert is nearly broke,” said David Wasserman, an editor for the Cook Political Report who analyzes House races.

Wasserman and others said Schweikert is the only incumbent in Arizona’s House delegation who appears to be in danger of being unseated, with other House members holding commanding leads in finances, partisan registration and name recognition.

Schweikert has been enmeshed for the past two years in a House Ethics Committee probe of misuse of congressional office funds and reporting shortcomings. The committee reprimanded Schweikert and levied a $50,000 fine after it “found substantial reason to believe” that he violated the Code of Ethics for Government Service and federal campaign finance laws.

Emmer said the investigation “probably” affected Schweikert’s fundraising for this election and could lead to a smaller margin of victory. But he said Wednesday that Schweikert, “I believe, is going to win this.”

According to a poll roundup Wednesday by FiveThirtyEight, Schweikert had a 3 percentage point lead over Tipirneni. But Wasserman cites private polls from both parties that he said show Tipirneni pulling ahead as Election Day approaches.

Schweikert’s campaign did not respond to requests for comment Wednesday. But a spokesperson for Tipirneni’s campaign agreed with Wasserman that the Democrat appears to have a good shot at unseating Schweikert.

The 6th District race is the most expensive by far among Arizona House races this year, with much of the fundraising attributable to Tipirneni.

In her most recent report to the Federal Election Commission, Tipirneni reported raising $4.9 million as of Sept. 30 and still having $1.5 million in the bank. Schweikert reported having raised just under $2 million with $546,046 in cash on hand.

While Tipirneni has a cash advantage, Schweikert enjoys name recognition in a largely Republican district. The most recent numbers from the Arizona Secretary of State’s office show that 39.1% of voters in the district are registered Republicans, compared to 27.6% for Democrats and 32.1% for independents.

But Tipirneni is no stranger to running in districts where Republicans outnumber Democrats. She ran twice in the 8th District against Rep. Debbie Lesko, R-Peoria, in 2018 – in a special election and the general – losing by 5 and 10 percentage points, respectively.

The only other House race in the state to approach the 6th District, in terms of fundraising and competitiveness, is the sprawling 1st District.

The Cook Political Report, which called Schweikert’s race a “toss up,” said the race that pits Rep. Tom O’Halleran, D-Sedona, against Republican challenger Tiffany Shedd “leans Democratic.” FiveThirtyEight’s roundup of polls had O’Halleran leading Shedd by 9.6 points as of Wednesday.

According to the FEC, O’Halleran has raised $2.9 million by Sept. 30 and Shedd reported raising $1.2 million. Wasserman said O’Halleran “remains the favorite.”

“What’s remarkable is that he’s managed to hold a district that has voted for a Republican presidential candidate twice so far this decade, in part because he has a good profile for the seat as a former independent state representative and former police officer,” Wasserman said.

Shedd did not respond to a request for comment Wednesday, while O’Halleran touted his bipartisan record in Congress.

“I’m proud of the work I’ve accomplished for 1st District families and am eager to return to Washington to debate, legislate, and work across the aisle to fight the partisan stalemate we’ve all suffered from this year,” he said in a prepared statement.

Except for those two races – and Arizona’s high-profile Senate race between Republican Sen. Martha McSally and Democratic challenger Mark Kelly – Wasserman believes the rest of the state’s congressional races are “pretty settled by this point.”

“None of the other House races in Arizona are nearly as contested as these two are,” Wasserman said.