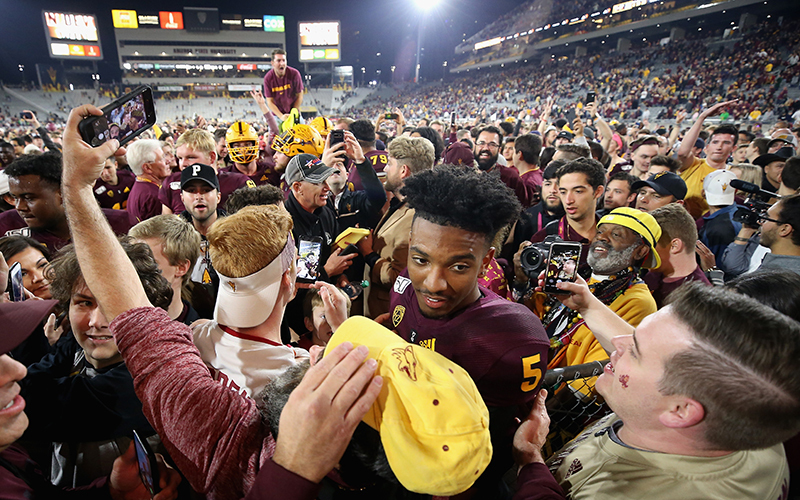 Although crowds like this one won’t be allowed at Pac-12 football games this fall, Arizona State quarterback Jayden Daniels (center) is among the conference players who have signed a petition to allow parents to attend. (Photo by Christian Petersen/Getty Images)

PHOENIX – When the Pac-12 football season kicks off Nov. 7, the festivities won’t include fans, at least initially. But conference players hope to have their parents there.

Multiple players, including ASU quarterback Jayden Daniels, promoted a petition started by Sahaja Douglass, the mother of USC offensive lineman Liam Douglass, on their social media accounts Tuesday and expressed a strong desire for their parents to be permitted to attend games.

The petition, addressed to governors of states with Pac-12 teams and Los Angeles Mayor Eric Garcetti, requests that the conference develop a plan “before the start of the 2020 season that allows families of the players to watch games live in the stadiums where they will be played.” It argues that social distancing in the conference’s football stadiums is “easily accomplished” due to their capacity and suggests family members wear masks and undergo temperature checks before entering stadiums.

As of Wednesday, the petition had at least 3,100 signees, with the list growing by the minute.

Ray Anderson, ASU Vice President for University Athletics, said Wednesday the decision to allow fans rests with government health officials and that the parents behind the petition are “misinformed.”

“We are in full favor of having family members and parents attend games, but at the end of the day it’s up to the local and county health authorities what we can do,” Anderson said. “Through the NCAA, athletes are allowed four tickets. We very much want to accommodate that.”

When the Pac-12 announced on September 24 that it would resume competition, it said that no fans would be allowed at games and that the health and safety of athletes and those connected to the program would be a priority. Commissioner Larry Scott added that issue would be revisited in January.

Anderson noted that as of now, when ASU starts its season at USC on Nov. 7, “there will be no fans,” and stressed that while those supporting the petition may think the decision to keep fans out rests with the Pac-12, it does not. Daniels and several other ASU players are natives of Southern California, and the game likely presents the easiest opportunity for their parents to see them play.

Pac-12 Network analyst Yogi Roth corroborated this, saying in a tweet Tuesday that Pac-12 athletes’ families were allowed to attend games “based on Pac-12/NCAA regulations, as well as subject to state/local health regulations.”

To all #Pac12FB players – your families are allowed to attend games based on @pac12/@NCAA regulations, as well as subject to state/local health regulations. Invite your families, tell them to bring signs, we want to see them on TV & everyone stay safe!

The Arizona Department of Health Services told Cronkite News in September that the state has no specific guidelines for return to play, though it is unknown whether this extends to having fans at games.

California quarterback Chase Garbers said Wednesday that if schools and the conference can keep families safe, he would support having them at games.

“It would definitely mean a lot, not just for myself but for all the players in the conference,” he said. “Like Yogi came out and said, it is up to the local health officials. And, you know, if our parents are able to be in the stands, where it’s safe, then I’m all for it. And I would love that and so would my parents.”

Stanford quarterback Davis Mills stressed that while he would enjoy having his parents supporting him in person during potentially his final collegiate season, he remains prepared to play regardless.

“It would mean a great deal,” Mills said. “This potentially could be my last season of college football and if my parents or close friends weren’t able to see that, it’d be tough. But I kind of have the mindset right now that whatever we got to do to play, we got to do that because I’m excited to get this season moving forward.”

For a local football point of comparison, the Arizona Cardinals allowed a limited number of fans, including family members and “close friends,” during their recent home game against the Detroit Lions on Sept. 27. Phoenix Rising FC has also allowed as many as 1,000 socially distant fans to attend home games at Casino Arizona Field.