Rising together: Phoenix FC welcomes fans back amid COVID-19 pandemic 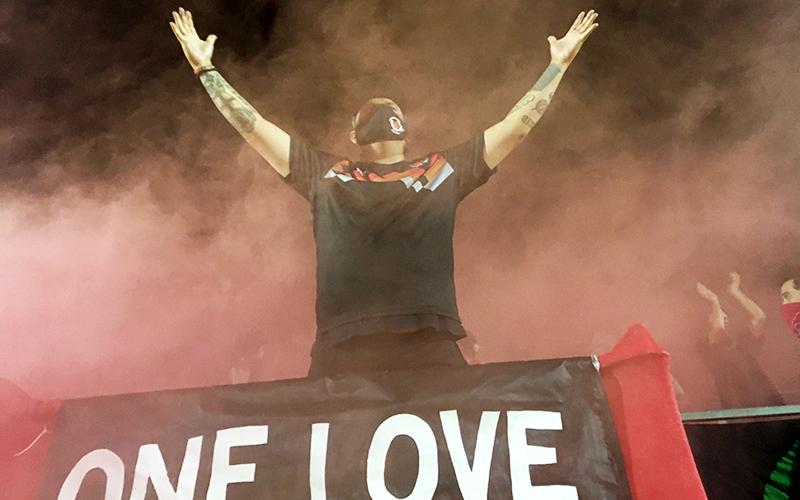 A Phoenix Rising fan in the supporters section chants while the red smoke is released. Friday’s game at Casino Arizona Field was the first major sporting event in the Valley in which fans could attend. (Photo by Aaron Bradley James/Cronkite News) 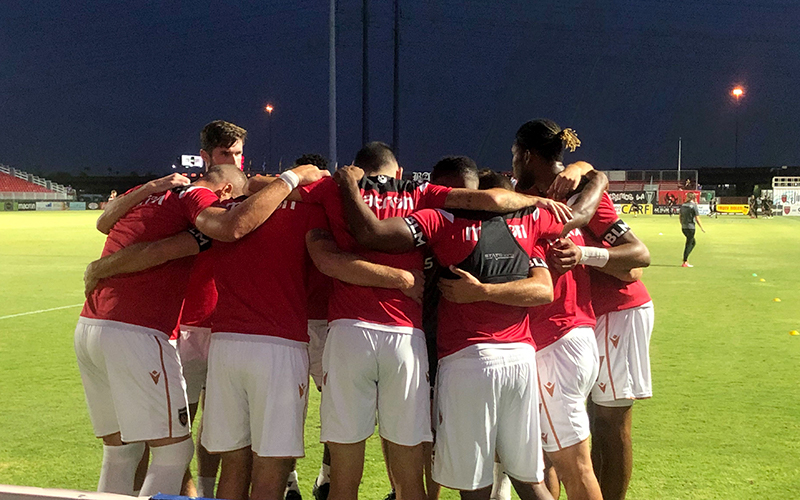 Phoenix Rising players huddle up during pregame festivities. Several players said they were motivated by having fans in attendance. (Photo by Aaron Bradley James/Cronkite News) 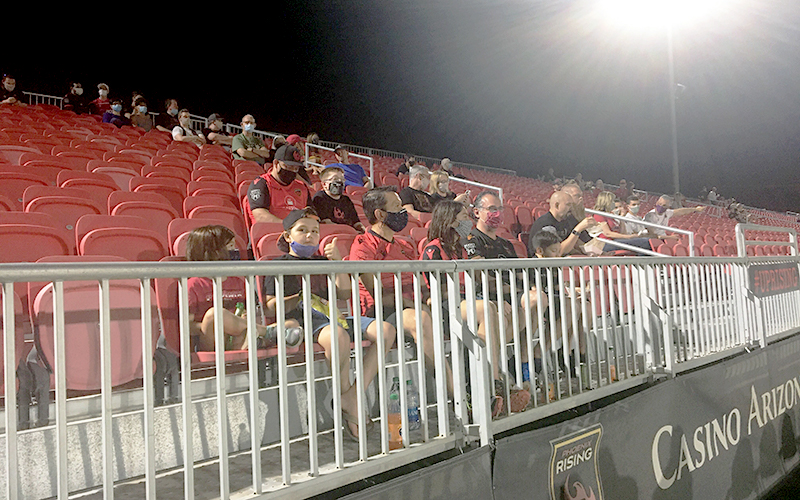 Fans at the Phoenix Rising match wear their masks and sit in their assigned seats away from other people in what is the new reality of game day. (Photo by Aaron Bradley James/Cronkite News)

SCOTTSDALE – Signs of a new normal for Arizona sports were apparent even in the parking lot outside Casino Arizona Field on Friday night, when for the time since COVID-19 swept the world, an Arizona professional sporting event took place before a live crowd.

Attendees arrived wearing their Rising jerseys as usual, but they also wore protective masks or scarves as they entered the stadium. Some of those mandatory items carried the team brand, too.

And once inside the stadium, many of the Rising’s followers had entire seating rows all to themselves. Only about 1,000 were allowed into the soccer facility, and they were spread out around a stadium that can hold 6,200 and is typically packed to capacity on gameday.

Evidence of the pandemic at the game wasn’t the only reminder of a tumultuous 2020. 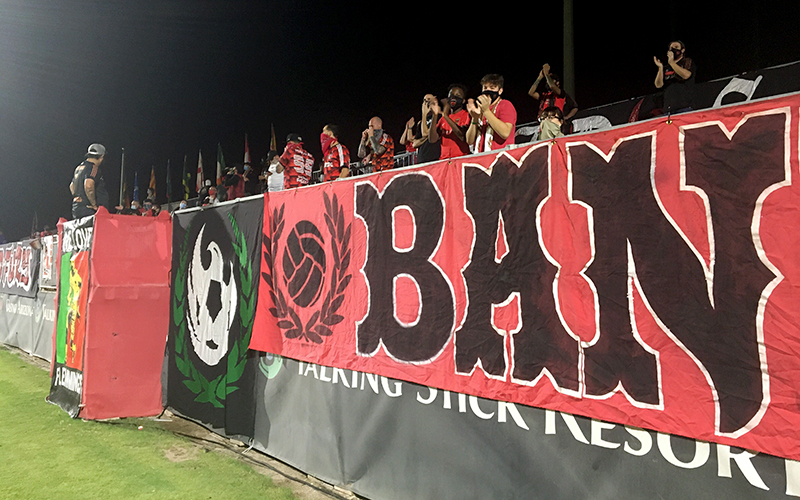 The supporters section cheers on the team as it comes onto the field for the game. (Photo by Aaron Bradley James/Cronkite News)

During pregame warmups Rising players wore shirts inscribed with the words, “United Against Racism.” And during minutes 7-8:46 of the game, both teams gathered at midfield and took a knee in a sign of unity against social injustice and racism.

Booing and shouts of “stand up” could be heard from some in the sparse crowd.

Most of the game, however, featured cheering, and the Rising were happy to have the support.

“It was an unbelievable feeling, and the fans were incredible today,” said midfielder Jon Bakero following a 5-1 Rising victory. “The fact that we have fans just gives me goosebumps, so we are thankful to have them here and we wanted to give them a win which we did today.”

During game action, the Rising’s passionate support groups, “The Red Fury” and “Los Bandidos,” displayed the energy and support the players are accustomed to – singing, banging drums and chanting for a club they hadn’t seen live on a pitch in months.

Those cheers made an impact on the players.

“It’s our motivation. We really needed to play for them,” forward Santi Moar said. “There were only 1,000 fans today, which hopefully in future it is more, but it feels much better seeing them.”

The spacious seating arrangements weren’t the only sign of new guidelines beyond the pitch. Protective masks were required for everyone in the stadium, including fans and support personnel, security guards and those working in concession stands.

Half of those concession stands remained closed and fans purchasing food and drinks were required to return to their seats to eat because no tables were provided near the concession areas.

Throughout the stadium, protocols were posted to remind spectators to sit only in their assigned seat, maintain a safe distance, wear a mask at all times and to stay at home if feeling ill.

Before the match, goalkeepers were the first to take the pitch for warmups and the sight of them stirred the crowd. One player could be overheard saying, “Wow, this feels different.”

When the rest of the team emerged in their game kits, fans erupted in cheers and the players applauded their fans in response.

Once play began, the small crowd made it possible to hear players communicating with each other and their coaches barking instructions between cheers from the fans.

Not everything was different.

All the game’s big moments or any display of skill from the players drew reactions from the stands, and the referee was not spared when a call didn’t go the way the crowd expected.

The Rising relieved some pressure in the 26th minute when forward Rufat Dadashov finished off a header made by Kevon Lambert off of a corner, giving the Rising a 1-0 lead and sending the crowd into a frenzy. 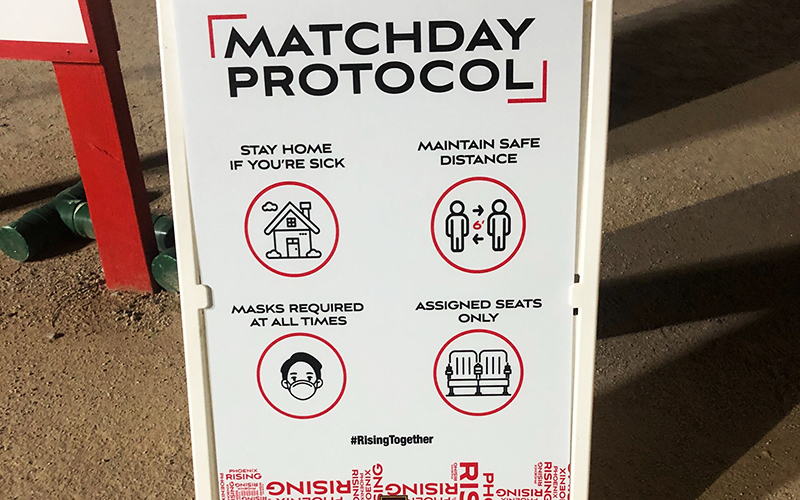 Dadashov would get fans going again when he scored his second goal of the night in the 44th minute when Moar played a nice ball to create a two-on-one situation, then laid the ball off for Dadashov to finish.

“The fans were like the adrenaline rush we needed,” Schantz said. “After the first 20 minutes, (the players) were dying because they got rid of their first wind quickly. But with fans, you get that extra energy and want to keep running.”

The Rising kept their momentum in the second half when forward Junior Flemmings finished in the 56th minute off a nice spin, and midfielder Sam Stanton added another score just a minute later.

A penalty kick put away by midfielder Jon Bakero capped off the night’s scoring for the Rising before the Lights finally avoided the shutout with a goal.

Led by the Red Fury’s singing, banging and cheering, the fans remained engaged throughout the match, and the atmosphere did not go unnoticed by the players.

For the Rising, who improved to 8-2-2 and top the USL Championship Group B standings after the victory, that part of normal isn’t new.