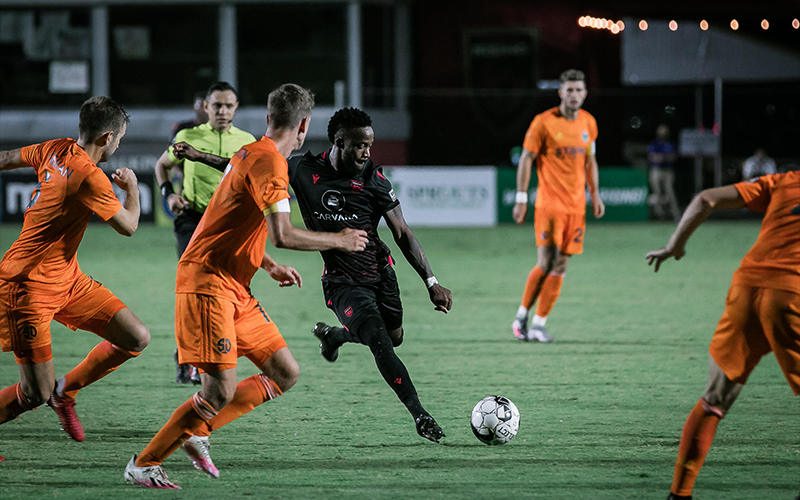 Junior Flemmings (center) won’t be available during the playoffs for Phoenix Rising FC after the United Soccer League Championship levied a six-game suspension for his alleged use of a gay slur at an opponent. (Photo courtesy of Ashley Orellana)

PHOENIX – The United Soccer League Championship announced Tuesday that it has levied a six-game suspension and a fine for an undisclosed amount against Phoenix Rising FC’s Junior Flemmings for his alleged use of a gay slur at an opponent.

The suspension means Flemmings will be unavailable for the playoffs, which start Saturday.

The USLC decision followed its investigation of an allegation against Flemmings “for the use of foul and abusive language in the form of a homophobic slur during the (Rising’s) match against San Diego Loyal SC on September 30,” according to the league’s website.

A heated exchange followed between referees, players and coaches of both teams.

At the time, San Diego’s emotions were still raw from a similar, racially charged incident that occurred one week earlier in a match against LA Galaxy II.

In the match against Phoenix, the San Diego players collectively marched off the field in protest immediately after the start of the second half, abandoning and forfeiting the match – even though San Diego was leading 3-1 at the time, with a USLC playoff spot hanging in the balance.

After the match, Flemmings denied the use of any homophobic slur against any San Diego player and stated that he stands “in solidarity with the LGBTQ+ movement.”

Phoenix Rising announced in a tweet on Thursday that it had placed Flemmings on administrative leave pending the results of the USLC’s investigation of the incident.

The Rising also placed its coach, Rick Schantz, on administrative leave, but stated the reason for the coach’s leave was not related to the incident.

Schantz tweeted Monday that his reaction before halftime of the Sept. 30 match included comments “dismissive of the accusation and have been interpreted that I feel that anti-gay comments are simply a part of the game,” but that “was not my intent or personal belief.”

Schantz also stated that “I have committed to taking steps that will help me recognize and change my conscious and unconscious biases, and to bring better understanding of LGBTQ issues to myself.”

After the Sept. 30 match, Martin (the target of the alleged slur) tweeted his appreciation for his teammates’ show of solidarity and cited the incident as “another example that we have a long way to go in educating ourselves and kicking hate out of the game.”

Martin and the Loyal organization have requested forgiveness for everyone involved in the incident.

San Diego issued a statement Saturday condemning “expressions of hatred towards Phoenix, Rick Schantz and their player, Junior Flemmings which have no place in our sport as well as our society.”

The upcoming quarterfinals have become something of a side note to the larger issue that both San Diego and Phoenix Rising committed to in a joint statement released Saturday, “to raise awareness, spread love and eliminate hate in all forms.”

In that statement, San Diego Loyal president Warren Smith also said, “We believe in second chances and look forward to working with Phoenix Rising on productive ways we can forgive, educate and grow from these moments.”