Phoenix Rising FC forward Junior Flemmings is under scrutiny after an opposing player accused him of using a homophobic slur in a game against the San Diego Loyal Wednesday night. (Photo by Robin Alam/Icon Sportswire via Getty Images)

“This is not the first time I’ve heard this homophobic slur,” Collin Martin, an openly gay player, said in a statement Thursday. “However, it’s the first time in my eight-year playing career that a slur has been directed at me during a game.”

The incident occurred at the end of the first half of Wednesday night’s game at Torero Stadium in San Diego, with the Loyal leading the Rising 3-1. The entire Loyal team later walked off the field in protest and forfeited the game.

After the match, Flemmings denied using the pejorative, tweeting, “At no point did I say a homophobic slur towards Collin Martin.” He also said “I respect all of my opponents equally,” and expressed disappointment that the Loyal’s reaction had led to him being “mauled and ridiculed online with no opportunity to defend myself.”

Flemmings concluded his statement by saying, “I stand in solidarity with the LGBTQ+ movement.”

The alleged slur is a common one used in Jamaica and directed at the gay community, said Maurice Tomlinson, a Jamaican attorney and leading gay rights activist in the Caribbean.

“It’s the worst thing you can be (called) in Jamaica,” he said.

The Loyal entered Wednesday’s match with emotions still raw from a racially charged incident in their previous match against LA Galaxy II just one week earlier.

In that match, LA’s Omar Ontiveros directed a racial slur at San Diego’s Elijah Martin. In protest, San Diego requested a forfeiture of the match even though it would adversely affect their standings in the United Soccer League Championship.

Referee Joseph Salinas signaled no foul and allowed play to continue for a moment. Salinas then abruptly stopped play and issued Martin a straight red card, apparently for an offensive remark directed at Flemmings.

San Diego players immediately clustered around the referee, protesting the decision. One San Diego player pointed a finger at Flemmings, who appeared to say something to the referee as he turned and walked away.

TV microphones picked up someone in the vicinity of the San Diego bench saying, “They got it wrong,” and “That’s the wrong guy. It was their guy.”

A microphone also picked up Loyal coach Landon Donovan saying, “Oh no, we’re off the field if he said that. F— that!” 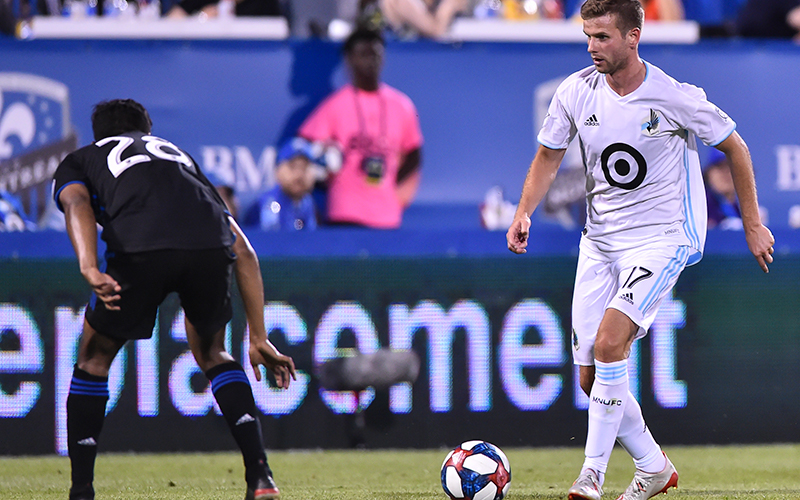 Donovan then entered the field of play (a red card offense for a coach) and several minutes of confusion followed, with lots of talking, gesturing and finger-pointing.

Donovan then exited the field as the referee indicated he would rescind the red card he previously issued to Martin. Salinas then blew his whistle to signal the official end to the first half.

A remarkable, animated conversation between Salinas, Donovan and Rising coach Rick Schantz followed. Their dialogue was picked up by the TV microphone.

Salinas said to Donovan, “I misunderstood because he’s (Martin) accusing the other guy (Flemmings) of calling him gay.”

Morad then entered the fray, pointed a finger at Schantz and said, “(Your) player called my gay teammate a (homophobic slur). Don’t act dumb. You know what that means.” Morad then walked away as Schantz turned to Donovan and asked the Loyal coach, “What’s his problem?”

Donovan then attempted to explain to Schantz the gravity of the situation from San Diego’s standpoint.

Donovan appeared to grow increasingly exasperated with Schantz as he expressed his disgust that his team had now been targeted for extremely offensive verbal abuse two weeks in a row.

Donovan questioned whether Schantz was downplaying the incident, and asked the Rising coach if he believed it was “not a big deal” to “call a player gay.”

Donovan eventually turned away from Schantz clutching his forehead. He then looked up to the stands and told someone there, “He called him gay. He called Collin gay. I can’t go through this … again.”

The on-camera conversation ended with Schantz asking the referee if Donovan deserved a red card for entering the field of play. “I’m just saying, how is he still in the stadium?” Schantz asked Salinas.

The teams then departed the field for the locker rooms for the halftime break, with Donovan indicating that he and his players would discuss the situation before deciding how to proceed.

The teams re-entered the field after halftime and appeared ready to resume play for the second half.

Donovan had a brief conversation with the referee and Salinas showed him the red card for illegally entering the field during the first half.

The Loyal coach then proceeded to the edge of San Diego’s technical area and Salinas blew the whistle to start the second half as many of the Loyal players took a knee in protest.

The Rising kicked off, played the ball back to their defensive line and looked up to see the entire San Diego team walking off the field.

In the middle of a critical USL Championship match, with a 3-1 lead and a playoff spot on the line, San Diego Loyal SC abandoned its match with Phoenix Rising FC.

After the match, Flemmings, the USL and both teams issued statements about the night’s events.

The USL statement stated simply that the league was aware of “the alleged use of a homophobic slur,” that such action would “not be tolerated” and that “an investigation is currently underway.”

The Rising released the following statement on Twitter: “Shortly before halftime during the Phoenix Rising match with San Diego Loyal SC this evening, confusion occurred surrounding the referee’s issuance of a red card to a San Diego player. Phoenix Rising is investigating the claim of a homophobic slur being used by one of its players who has vehemently denied these allegations. Phoenix Rising stands with the USL in rejecting and punishing any homophobic behavior.”

Schantz tweeted that his questioning of Donovan prior to halftime should not be interpreted as “excusing any alleged homophobic behavior from my players.”

The Loyal tweeted a four-minute video with Donovan’s response, in which he said that after last week’s incident with LA Galaxy II, “We made a vow to ourselves, to our community, to our players, to the club, to USL – that we would not stand for bigotry, homophobic slurs, things that don’t belong in our game.”

Donovan also stated that, prior to Wednesday’s match, both the Rising and the Loyal had pledged to stop play at the 71st minute, stand in solidarity and unfurl a banner in support of the Loyal player that had been targeted for racial abuse last week.

The banner read, “I will speak. I will act.” Because of the incident prior to halftime, the public never got a chance to see the banner or the players’ display of unity.

The Donovan video received nearly two million views by early Thursday afternoon, with reactions coming in from all over the globe.

Martin attributed the confusion surrounding the red card he received (which was later rescinded) as a misinterpretation of his reporting the incident to the referee, whereby Salinas believed Martin was using the slur in reference to him.

Martin concluded his statement by praising his teammates for their reaction to the incident.

“Their collective decision to walk off the field in solidarity and forfeit the match speaks volumes of their support for me and what this organization is standing up to,” Martin said. “Ultimately, I hope this can be another example that we have a long way to go in educating ourselves and kicking hate out of the game.”