Sports leaders from around the state, including Arizona State athletic director Ray Anderson and Arizona Cardinals owner Michael Bidwill, got together recently to discuss how they can better combat social injustice. (Photo by Christian Petersen/Getty Images)

PHOENIX – In 1991, the NFL pulled the ‘93 Super Bowl from Arizona because voters failed to establish a paid Dr. Martin Luther King Jr. Day holiday. In the wake of that decision, Arizona’s sports franchises led the effort to establish the holiday.

The HeroZona Foundation, a nonprofit organization aimed at bridging the community to its leaders, gathered sports executives across Phoenix to discuss sports activism Sept. 8. Leaders from the Cardinals, Suns and Mercury, Coyotes, Arizona State’s athletic department, the Diamondbacks and NASCAR spoke on the panel at the Kimpton Hotel Palomar Phoenix.

ASU Athletic Director Ray Anderson, the only Black person on the panel, said he welcomed this long-overdue conversation.

“You’re either racist or anti-racist, (you) can’t sit on the sideline and be a bystander anymore,” Anderson said.

Alan Powell, the CEO of HeroZona, sees sports as an integral part of the state. From baseball’s Cactus League spring training to Super Bowls, an NCAA Final Four, NBA and MLB all-star games, and the College Football Playoff National Championship, Phoenix has played host to some of the biggest events in sports.

Speakers at the event said leaders in other states aren’t having these conversations about racial inequalities with high-powered sports leaders.

“I think Arizona is the right place, and I think Arizona can be a model for the rest of the United States for change,” said Cardinals owner Michael Bidwill.

Now, with a large number of sports fans wanting to see change, Powell said Arizona franchises have stepped up to lead the effort.

“I think that they’re trying to find common ground among some of these organizations to make a difference,” Powell said.

That change starts with the dialogue among sports leaders. Police chiefs from several Valley communities attended the event, and Powell said that it can make a big difference when police hear from stakeholders in sports. 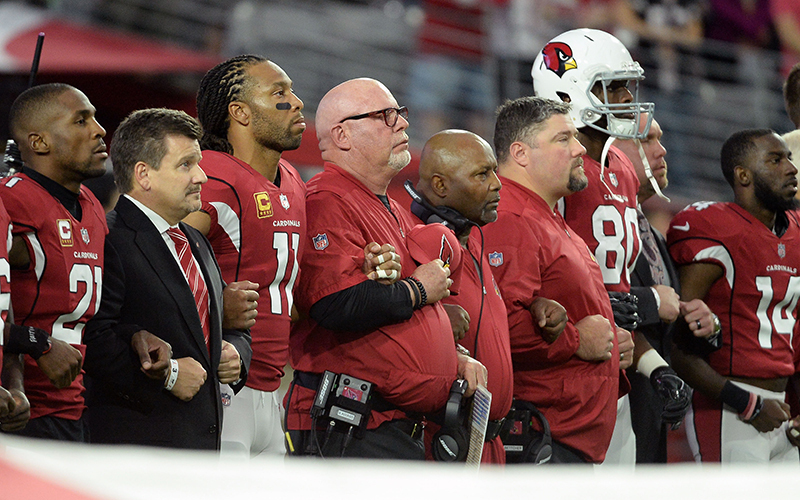 Arizona Cardinals owner Michael Bidwill (second from left) said he believes “Arizona can be a model for the rest of the United States for change.” (Photo by Jennifer Stewart/Getty Images)

Scottsdale Police Chief Alan Rodbell said he has been attending the non-profit’s event since its inception in 2015. He said police can better serve by listening at these forums and applying what they learn to their community.

“Many of the concepts discussed, or issues raised, have been documented through forum reports and have made their way into the Scottsdale Police Department Strategic Plan,” Rodbell said.

When the Black Lives Matter movement picked up steam following the death of George Floyd in Minnesota, Arizona sports teams expressed support for systemic change. Previously, when issues like police brutality and sports intersected, many teams shied away in fear of alienating fans.

In 2016, when San Francisco 49ers quarterback Colin Kaepernick became the sports face of the movement against police violence against Black men by kneeling during the national anthem, many teams including the Cardinals avoided involvement.

NFL Commissioner Roger Goodell apologized earlier this year for not supporting Kaepernick, who has not played in the NFL since that 2016 season.

Bidwill said the organization began listening to its players on the issue at that time, and has cultivated that part of the relationship.

Anderson said he understood and that people who look like him understood Kaepernick’s message. It inspired him and the rest of the athletic department. ASU followed his lead in having conversations with athletes on how to get their message across.

Student-athletes are finding their voices and using them. That’s not going away, Anderson said. He knows it’ll turn off some fans, but that’s a price he and ASU’s athletes are willing to pay.

“You have a decision to make, because we’re not going to be impeded in our advancement,” he said. “You can either stay with us, or it’s your prerogative to make the other decision.”

Powell said he found hope while listening to the panel.

“I could just actually see the energy. It was real sincere energy,” he said. “You can actually see them want to be a part of the conversation, and that meant a lot to me.”

Powell’s not much of a hockey fan, but Coyotes President Xavier Gutierrez really caught Powell’s attention.

In June, Gutierrez became the first Latino to hold that position with an NHL team. It’s not lost on him that he and owner Alex Murelo are working within a historically white majority space.

“This dialogue today is why I took this opportunity to take this role on, because sports is a voice,” Gutierrez said. “Sports does have a platform.”

While the dialogue is a crucial starting point, Gutierrez said action is most important from teams. Sports leaders need to take more steps to create lasting change.

Multiple leagues have devoted resources to level the social playing field, and the effort starts within team organizations and in the communities where the teams play.

Increasing diversity within organizations is an important aspect of that. Gutierrez said it’s personal for him to have more minority voices making decisions, and the Coyotes have emphasized that.

Since taking over the ASU athletic department in 2014, Anderson has brought in diverse talent, including atop the university’s biggest platform – its football program. Anderson hired former NFL coach Herm Edwards to lead the Sun Devils. Edwards is one of just 14 Black head coaches at the NCAA’s 130 FBS schools.

“We want the best talent, but we’re going to be really broad-minded about what that means,” Anderson said. “If there’s an opportunity to advance diversity and inclusion, we will be intentional about it.”

Jason Rowley, president of the Suns and Mercury, said his teams are creating mechanisms to empower Black enterprises. That begins with education and mentorship to give others a chance to lead.

Gutierrez agrees that the franchises have the responsibility to invest in the community and lift up minority businesses.

“We are very large business enterprises. The impact we have on economies is massive,” said Gutierrez, who added that sports franchises must make the effort to partner with diverse businesses across the community, from vendors to service providers.

Looking at it through a business lens, Gutierrez said the Coyotes are following the puck as hockey moves toward better inclusion of women, minorities and youth demographics.

Younger fans, for instance, embrace racial equality, he said. They acknowledge these issues and look for solutions without a second thought. There isn’t a neutral opinion on whether black lives matter. The Coyotes president said the team is going to invest financially in solutions, in hope that leaders will not need to have the same conversation 10 years from now.

Meanwhile, Bidwill works with the Greater Phoenix Leadership group where more than 120 Arizona CEOs aim to shape the community. Now more than ever, he sees racial equity as a top priority for executives.

And the Cardinals owner is especially familiar with sports activism in Arizona – or the lack thereof.

Bidwill’s father, former Cardinals owner William V. “Bill” Bidwill, who passed away in 2019, successfully pushed to bring Arizona its first Super Bowl after moving his team from St. Louis to the desert.

He watched that first chance slip away in 1991. A planned paid King holiday, established by an executive order from former Arizona Gov. Bruce Babbitt in 1986, was rescinded by Babbitt’s successor, Gov. Evan Mecham, one year later.

That led to a referendum to establish the holiday in 1990. When Arizona voters rejected it, the NFL pulled the 1993 Super Bowl, which had been awarded to Arizona and was to be played at Sun Devil Stadium in Tempe.

However, the elder Bidwill worked with the Rev. Dr. Warren Stewart, an Arizona civil rights activist, to push for legislation that would establish a paid King holiday in Arizona, Michael Bidwill said.

As a result of those efforts, a 1992 referendum to establish the holiday passed, and the NFL awarded the 1996 game to Arizona. Now, the Cardinals and the NFL are again pushing for social change.

“We’re really starting to see the ripple effect,” Bidwill said. “Our (NFL) players started it, Kaep started it; others have started it. I think this is going to be an important year in terms of advancement of equality in America.”