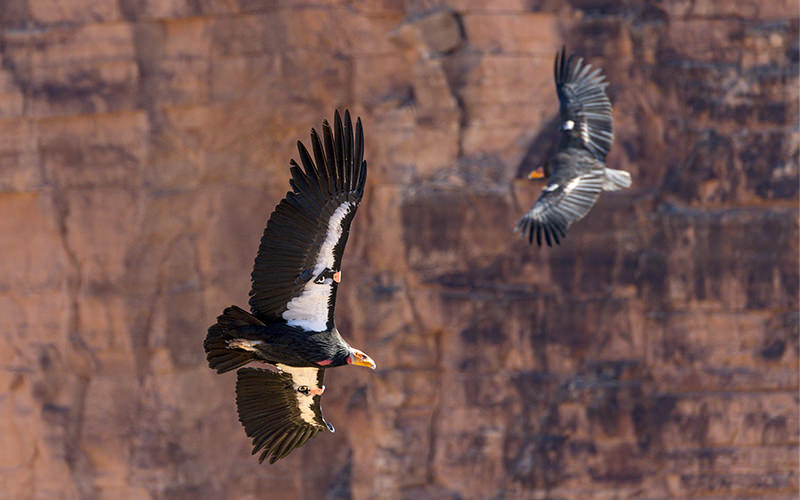 Two newly released California condors look to catch updrafts near the Vermilion Cliffs on Saturday. Four of the endangered birds, all hatched last year, were released in northern Arizona by the Peregrine Fund, which breeds them in captivity. (Photo courtesy of Jim Shane/The Peregrine Fund)

PHOENIX – About 1,900 people watched online Saturday as, one-by-one, four young California condors flapped through the opening in their release cage to take to the skies above Vermilion Cliffs National Monument, casting shadows on the windswept rocks below.

The Peregrine Fund and several of its partners, including the federal Bureau of Land Management and Arizona Game & Fish Department, were on hand for the annual condor release near the cliffs, which are north of the Grand Canyon and south of the Arizona-Utah line.

California condors’ wingspan can reach up to 9.5 feet, the largest of any flighted bird in North America, according to Erin Katzner, Peregrine Fund’s director of global engagement. Scavengers, they mostly eat carrion, including deer and elk left by hunters.

“This is a species that’s been around since the Pleistocene and we almost lost it,” Katzner said. “The fact that we have these birds and we can go out and see them is something that people really ought to take advantage of.”

In 1982, there were only 22 California condors left in the world, in large part because of poisoning from lead ammunition. The Peregrine Fund started breeding condors at the World Center for Birds of Prey in Boise, Idaho in 1993. Since then, the number has increased to about 500, but the birds remain endangered. Along with breeding condors, the fund promotes nonlead ammunition for hunting.

At the Idaho center, a specialist analyzes the genetic makeup of the birds to see which ones should be mated to increase the population’s genetic diversity. 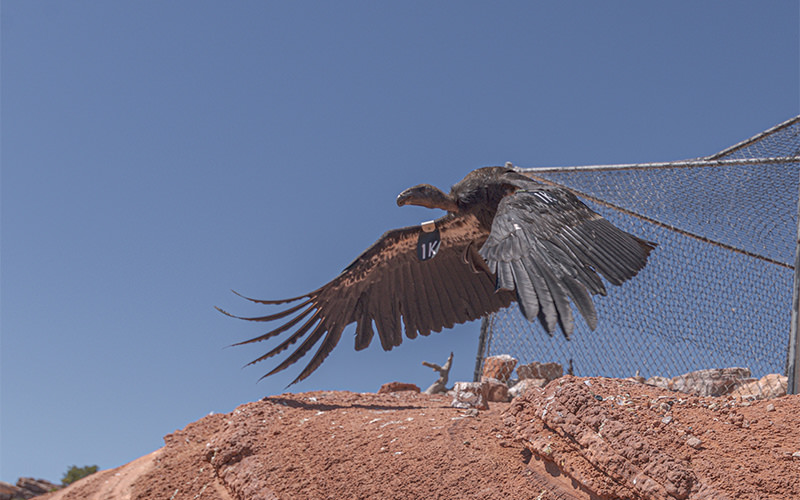 The female and three male condors released Saturday were bred at the center and the Oregon Zoo in Portland, Katzner said. They were all born in spring 2019. One of the birds bears a wing tag that reads “TC” in memory of the Peregrine Fund’s founder, Tom Cade, who died last year at 91.

“It was a nod to somebody we all admire and miss,” Katzner said. “It’s kind of cool to think that Tom Cade is out there flying around soaring in the sky just like he should be.”

Condors take five to seven years to mature sexually, and they can live to age 60. They produce just one chick every other year, according to Allen Zufelt, who coordinates Arizona Game & Fish’s California condor program, which makes the condor captive breeding project slow but steady.

“To go from 22 to 500 (condors) is really pretty good, especially when you consider their very slow reproductive rate,” he said. “They do have challenges, and as long as we continue to fight the good fight, they’re on a good trajectory.”

Zufelt said biologists will closely monitor the newly released condors, using radio transmitting, during daylight hours for three to four weeks to ensure the birds are adjusting to being in the wild. Certain key skills, such as obtaining food and avoiding predators, are not learned while the birds are in captivity.

To help the scavengers adjust, Zufelt said, biologists leave carcasses at the release site and haze the condors if they try to rest on the ground, where they’re vulnerable to coyotes, their main predators.

In pre-pandemic years, the condor release brings a large audience to the Vermilion Cliffs, despite the event’s remote location. But because of COVID-19, the release happened virtually so people could watch safely.

The bandwidth at the release site was low, which required creative problem-solving to get the live stream running. Organizers used a piece of equipment, called the LiveU Solo, to aggregate several cell phone signals into one to stream the condor release across the globe.

The virtual platform this year increased the audience from about 750 people who attended in person in 2019 to 1,900 who watched the livestream, and 9,000 viewers have watched the event since Saturday.

The Bureau of Land Management is in charge of the national monument, where four or so condors are released once each year. Rachel Carnahan with the BLM said Vermilion Cliffs is the perfect place for the release because condors rely on strong updrafts for flight due to their size. They also nest in natural cavities and caves in cliffs and prefer open grasslands or savannas for foraging.

In addition to northern Arizona, condors are being reintroduced into the mountains north of the Los Angeles Basin, in the Big Sur area of the central California coast and in the mountains of Baja California, Mexico, according to the U.S. Fish & Wildlife Service.

The release was held on National Public Lands Day, which is significant to the California condor release, Katzner said.

“I don’t think a lot of Americans realize how special it is that we have public lands in our country that anybody can go visit,” she said. “This is a celebration of that and the fact that we have a critically endangered species that’s recovering on our public lands.”

The program’s future and the success of the big birds is heavily influenced by hunters and the public, Katzner said, adding that everyone can have an impact in the condor success story.

Spreading awareness is one of the best ways to help the program, she said, and Katzner encouraged Americans to put seeing condors on their bucket list.

“If people haven’t been to places where California condors live and haven’t gone out and tried to seek the opportunity to see a California condor in the wild, they need to do that,” Katzner said. “It’s a really special experience to get to see one of these birds soaring overhead.”