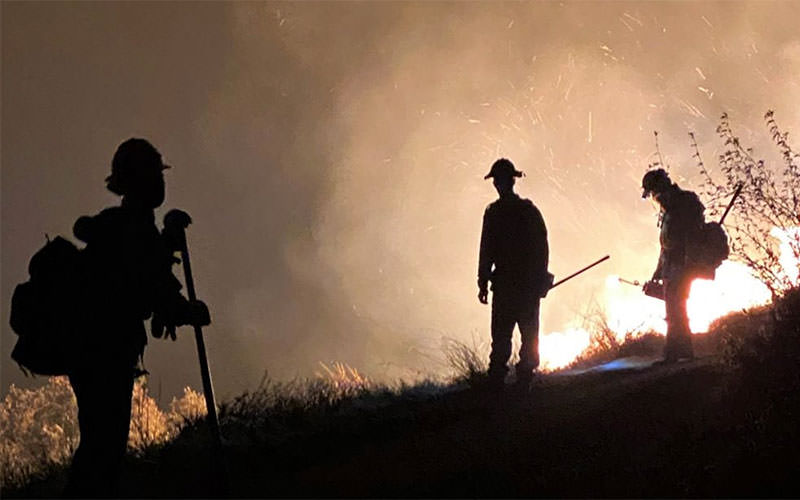 A new law will allow people who worked as firefighters while incarcerated to apply for the necessary licenses to continue working as a firefighter after they are released from custody. (Photo courtesy of California Department of Corrections and Rehabilitation)

With California in the middle of peak fire season, blazes across the state have been a challenge for firefighters, with fewer incarcerated firefighters in the field because of responses to the COVID-19 pandemic. A new law seeks to boost their ranks.

The problem of staffing fires has grown acute since March, when the California Department of Corrections and Rehabilitation began reducing the prison population to slow the spread of the novel coronavirus that causes the disease. As of Sept. 21, more than 21,000 inmates had been released, leaving fewer available to battle wildfires.

In a news conference Sept. 11 in Oroville, Gov. Gavin Newsom said that at the beginning of the wildfire season, and because of COVID-19, the state planned for “a reduction in an availability of incarcerated personnel that could help provide some supplemental support for CAL FIRE, in terms of providing suppression and handcrew help.”

Additionally, a coronavirus outbreak at the California Correctional Center led to only 94 of the 192 crews of incarcerated firefighters being available at the beginning of July, the Guardian reported. No confirmed COVID-19 cases have been detected in fire camps across the state.

Facing fires of record-setting size, California has also repeatedly called on Arizona and other states to send firefighters to help battle flames. Since July, hundreds of Arizona firefighters and dozens of fire engines have been sent to battle fires in California, Oregon and Colorado, according to the Department of Forestry and Fire Management.

“It has been a challenging and grueling summer for Arizona and now the west is fully immersed in historical, high fire activity. Our western neighbors support us during our busy period and Arizona always returns the favor to assist them,” John Truett, fire management officer for the Arizona Department of Forestry and Fire Management, said in a release earlier this month.

CAL FIRE wants to recognize the many out of state partners that have joined in battling these wildfires. pic.twitter.com/OI7ixq0g1G

The demand for firefighters has called attention to California’s reliance on incarcerated firefighters throughout the state, and with that came criticism of the hurdles these inmates faced to continue to work as firefighters after being released from custody.

California law prevented convicts from applying for their records to be expunged until they complete the terms of their parole. Even if an expungement was granted, former inmates were required to disclose any criminal history on applications for state licenses – including for emergency medical technician, which is required for firefighters in California.

This has meant that inmates who worked in fire camps could not apply for the necessary licenses to be firefighters, at least not without overcoming significant hurdles.

Starting Jan. 1, 2021, California may see an increase in its firefighting workforce.

During his Sept. 11 news conference, Newsom, sitting at a picnic table surrounded by the damage left by the North Complex Fire, signed Assembly Bill 2147, which allows inmates who participated in a California Conservation Camp Program or worked on a hand crew to petition for an expungement of their records upon release from custody.

The law’s author called it “about giving second chances.”

Inmates with a minimum custody status, which is the lowest classification for California inmates, can volunteer for a fire camp program. Those convicted of sexual offenses or arson, or have “any history of escape with force or violence,” are automatically ineligible. Proponents of the legislation say it can reduce recidivism by improving employment opportunities after sentences are served.

The state corrections department said about 3,100 inmates are working at 43 fire camps statewide. They receive the same training given to seasonal firefighters by the California Department of Forestry and Fire Protection, as well as additional training while they remain in the program.

Unlike many other former incarcerated firefighters, Katherine McCain earned her EMT license, but it was a long struggle.

“I had full disclosure with the school that I took the class from, letting them know my history because it was on the questionnaire on day one,” she said. “At that point, it was eight years since I had been released from prison.”

McCain spent months going back and forth with the county and the National Registry of Emergency Medical Technicians.

“It took a lot of fighting,” McCain said. “They agreed to let me test and get my national certificate, but it took me the better part of a year, to a year and a half.”

McCain now works as a fire inspector and rotates as the assistant fire marshal for the Oakland Fire Department in California.

Unfortunately, many former inmates can’t dedicate the time and resources to fight for just the possibility of a similar opportunity.

Assemblymember Eloise Gómez Reyes, D-San Bernardino, who wrote AB 2147, in the past had pushed similar legislation to remove barriers that kept the formerly incarcerated from applying for EMT licenses.

Newsom recognized Reyes’ efforts in his signing ceremony, noting “there were efforts last year where we made progress, but this year … we actually got this done.”

Inmates who have stood on the frontlines, battling historic fires should not be denied the right to later become a professional firefighter.

Michelle Garcia, program coordinator for the Ventura Training Center and the Anti-Recidivism Coalition, said for people working at fire camps, it can be discouraging to know the skills they are taught will not lead to a viable career upon release.

“There’s nothing worse than spending two, three years in fire camp, learning a new trade, being skilled at it and enjoying it … and coming home and not being able to use it,” Garcia said. “These men and women are going to be able to have the hope that they can have this career now.”

Some people take roles in fire prevention after their release, but skills in that field do not entirely overlap with training they received in fire camps.

“You can go into the fire prevention side,” McCain said, “but it’s not the same thing as fighting fire.”

Supporters of the new law hope the chance at a career in firefighting will help lower recidivism rates.

“Rehabilitation without strategies to ensure the formerly incarcerated have a career, is a pathway to recidivism,” Reyes said in a release after the law was signed.

Garcia said the obstacles that prevent previously incarcerated people from providing for themselves and their families is a big factor affecting recidivism.

“You have hurdles that you have to keep climbing over – that is what leads to a lot of recidivism,” she said. “You get discouraged, and you go back to behaviors that you are comfortable with.”

Newsom, in a release, said the law “rights a historic wrong and recognizes the sacrifice of thousands of incarcerated people who have helped battle wildfires in our state.”

As for McCain, she is looking forward to new opportunities granted to her through the passage of this bill. If she gets her records sealed, she aims to obtain other certificates to open doors for her career in Oakland and statewide.

“I just know it’s going to impact me hugely – I could be the next state fire marshal,” she said, laughing. “Sky’s the limit with this for me now.”