Chandler High School football coach Rick Garretson is committed to his team following all safety protocol so they return to play. (Photo by Kevin Hurley/Cronkite News)

PHOENIX – The Arizona Interscholastic Association’s decision to adjust a key COVID-19 metric opens the door for more high school football teams to start football on Sept. 30 and follows an outcry by parents upset by the original positive case ratio.

The AIA Sports Medicine Advisory Committee announced Thursday that the ability to safely participate in football activities and compete in the upcoming high school football season depends on if a district or county has no more than 75 positive COVID-19 cases per 100,000 people.

The original recommendation from the SMAC was, in order to participate in the upcoming season, a district or county could have no more than 10 positive COVID-19 cases per 100,000 people.

“(Us as parents) just think that when you weigh everything, (playing football) is really important to the kids,” said Brad Schweigart, a father of football players at Notre Dame Prep and Cactus Shadows High School. “Within the parent group, it’s overwhelming support.”

Schweigart, a member of the growing Parents in Support of 2020 Football in Arizona Facebook group, said giving students the chance to play will have a bigger impact on them than the AIA realizes.

“Football is important to a lot of these kids and if you take that away, unfortunately, the mental side effects are just tremendous,” Schweigart said. 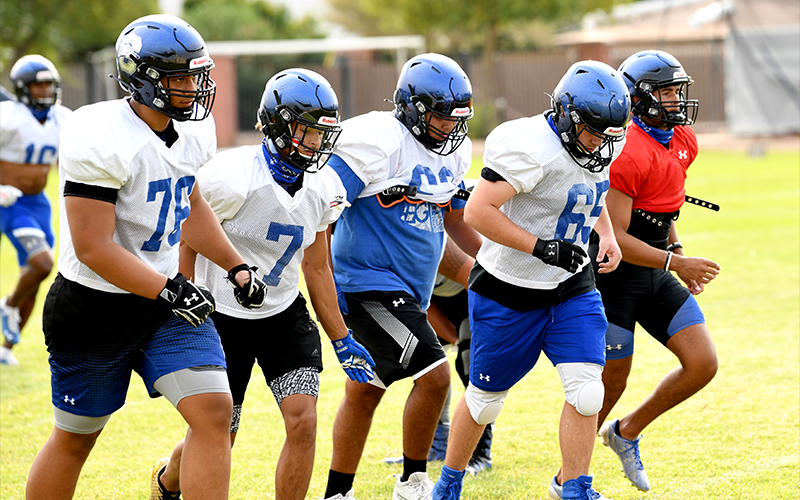 The Arizona Interscholastic Association announced Thursday a change in COVID recommendations that could bring the sport back to the desert. (Photo by Kevin Hurley/Cronkite News)

With the new metric in place, it still may not mean every school in Arizona will be good to go come Sep. 30. According to an Arizona COVID case count published by the New York Times, the only two counties in Arizona, at the time of the metric change, that do not satisfy the new SMAC metric are Pima and Coconino counties.

Other counties, however, have numbers that would allow play.

“Seeing the positive results in other states was a big help to reach this conclusion,” AIA Executive Director David Hines said in an official AIA statement. “It’s a testament to those associations for putting proper rules in place so football can happen. We have similar numbers and similar safety recommendations as compared to those states.”

The announcement comes nearly a month and a half after the AIA approved Sep. 30 – Oct. 2 as the first week of the high school football season.

“We have been given the opportunity to compete in football. However, it will take all of us – coaches, players, parents, fans and administrators – to implement all of the modifications,” Hines said. “This is critical for us to stay on the current track. It is equally as critical that all involved understand the importance of adhering to the guidance of athletic trainers and medical personnel.”

In the event of an athlete testing positive for COVID-19, the AIA also stated that every school and district should have its own guidelines on how to handle that type of situation.

“We’ve been saying, ever since the initial school shutdown back in March, that we want to have a full fall season,” Seth Polansky, the AIA sports information coordinator, said. “In football, we are going through some items in our recommended guidelines, seeing how we can make football better and how we can make it safe.”