The product of Steve Keim’s hard work in the offseason was on display Sunday when the Arizona Cardinals beat the San Francisco 49ers, 24-20. (Photo by Dan Kubus/Getty Images)

PHOENIX – While the Arizona Cardinals were led by second-year quarterback Kyler Murray and newcomer DeAndre Hopkins Sunday afternoon in Santa Clara, another performance stood out amid the absentee crowd.

The one belonging to Cardinals General Manager Steve Keim.

Keim delivered a trade for the ages in March when he sealed a deal that sent then-Houston Texans superstar Hopkins and a fourth-round pick to the desert in exchange for running back David Johnson — and Johnson’s $11.2 million cap hit — and a second-round pick, in addition to a 2021 fourth-round selection.

The unlikeliest of acquisitions paid dividends for the Cardinals in week one.

Hopkins posted a career-best 14 catches on 16 targets for 151 yards. He was practically unguardable, and far and away Murray’s favorite option.

In comparison, four of Houston’s starting wide receivers combined to tally 13 grabs for 163 yards in their season-opening loss to the Kansas City Chiefs on Thursday night. Texans quarterback Deshaun Watson missed Hopkins’ presence on the outside dearly. So did coach Bill O’Brien.

“I think Steve’s done a tremendous job of bringing in pieces this year … that we feel like fit our scheme and can have (an) immediate impact,” said Cardinals coach Kliff Kingsbury during the team’s final week of training camp.

It was also Keim’s decision to move on from quarterback Josh Rosen and commit to Murray, a choice that followed several difficult years, including the general manager’s guilty plea of extreme DUI in 2018.

He appears to have hit his stride.

In lieu of fans Sunday, and in the thick of troublesome air quality, Murray and Hopkins combined to treat viewers at home with a two-man offensive spectacle in the Cardinals’ 24-20 victory over the 49ers.

Murray completed 65 percent of his passes en route to throwing for 230 yards. He dumped off a 10-yard touchdown pass to change-of-pace back Chase Edmonds, set up by a blocked punt, halfway through the first quarter. He added a total of 91 yards via 13 carries the old-fashioned way, as well.

“This is the most proud I’ve been of him, to date,” Kingsbury said after the game, “because that is a tough defense and you get those monsters coming after you for four quarters. It’s not easy to sit back there and continue to hang in the pocket, continue to make plays with your feet, and he just kept fighting.”

The former first overall pick and Hopkins, a prodigious pass-catcher, were the winners once the clock struck triple zeros and cardboard cutouts of fans, well, continued to sit still.

“I didn’t know that he was going to go for that many catches, but he got hot and Kyler and him got in a rhythm,” Kingsbury said. “I’m just excited that he’s part of our organization.”

Overall, Arizona’s offense was a bit dull; lacked explosive, down-the-field plays in the passing game and struggled in the early going to effectively run between tackles.

“It wasn’t pretty early,” Kingsbury said. “Players are rusty. I was rusty with my play-calling and they did a great job, defensively.”

But the Cardinals never batted an eye. Murray’s legs and Hopkins’ reliability bailed Arizona’s offense out of a bind in the contest’s witching hour. The duo continually displayed effortless chemistry and gravitated toward one another with momentum and points in jeopardy.

First, it was Murray, stepping up in the pocket on second-and-nine, darting to his right, planting his foot in the ground to split a pair of 49ers defenders and then kick into high-gear to cruise past the pylon into the end zone, gifting Arizona a 17-13 lead with 10:26 to go.

“That guy was running, today,” said safety Budda Baker, emphasizing that San Francisco’s front-seven is not one to be taken lightly. “Our O-line did a great job of trying to tame them, and Kyler, he did his thing…he did what God blessed him with, which is being very fast.”

Then, it was Hopkins’ turn to dazzle, and capitalize what will, likely, be remembered as a career-defining showcase.

Facing a decisive third-and-six — his new team trailing 20-17 — Hopkins crossed over the middle of San Francisco’s defense and secured, perhaps, the simplest of his 14 receptions. Then, instinctively, he turned upfield and hit the nitrous button, like Dom Toretto in the Fast & Furious franchise, and streamlined forward, end zone tunnel vision on full display. 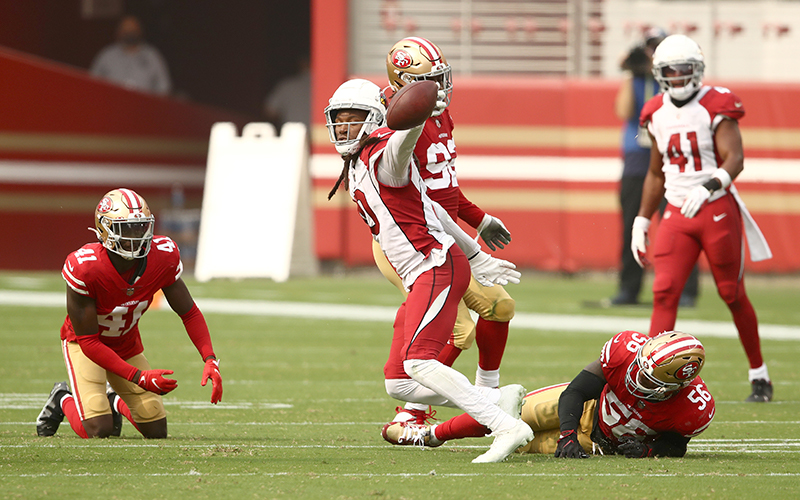 Hopkins, ultimately knocked off his path by safety Jaquiski Tartt, bounced to the ground merely feet shy of the goal-line. He didn’t score, but the damage had been inflicted. And, Cardinals running back Kenyan Drake punched in the go-ahead and, eventual, game-winning touchdown with just over five minutes remaining in the fourth quarter on the ensuing play.

“He wants to win, first and foremost, and you sense that out on the sideline,” said Kingsbury, crediting Hopkins’ desire to compete, “it’s fun to be around. It’s fun for our guys to see that type of passion and that type of effort when he’s out there.”

Keim has more reasons to celebrate, however, than solely for Hopkins’ eagerly-awaited, and sweeter-than-imagined debut in an Arizona uniform.

The Cardinals general manager, who has served in the same role since 2013 — after getting his foot in the door with the franchise as a regional scout in 1999 — seemed to hit his stride this offseason, acquiring several notable defensive players in free agency.

By Sunday’s bar, the Cardinals’ defensive standards have certainly been elevated.

A revamped secondary, aided by veteran cornerback Dre Kirkpatrick —who signed with the team at the tail-end of August — held 49ers quarterback Jimmy Garoppolo, for the most part, in check. Garoppolo completed just 57 percent of his passes, and struggled to get into a groove with a limited supply of pass-catchers — starting wide receivers Deebo Samuel and Brandon Aiyuk, a 2020 first-round draft pick from Arizona State, were designated with injuries, therefore unable to compete in Sunday’s divisional showdown.

Baker lived up to his monstrous billing, notching a team-high 15 tackles.

Patrick Peterson rejected an end zone heave —on San Francisco’s final drive — that felt like the opposition’s best chance to exit Sunday’s slugfest with a one in the win column.

Most impressively, though, it was Keim’s latest roster-additions who set the tone and paved the way, defensively, for Arizona’s monumental week-one victory.