Sourdough Sam, the San Francisco 49ers mascot, tries to get the cardboard cutout fans to cheer during their game against the Arizona Cardinals at Levi’s Stadium in Santa Clara, California. The games was symbolic of an era when COVID-19 and social justice are dominating discussions. The Cardinals chose to stay in their locker room during the national anthem. (Photo by Ezra Shaw/Getty Images)

When the “Star-Spangled Banner” echoed in a fanless, smoke-shrouded Levi’s Stadium in Santa Clara, California, the Cardinals remained in the visitor’s locker room.

Following George Floyd’s death at the hands of police in May, Cardinals quarterback Kyler Murray announced he would kneel during the national anthem in protest of social injustice. Instead, the Cardinals made the united decision to sit out the pregame tradition and remain in the locker room, Arizona cornerback Bryon Murphy said.

“There’s a lot of stuff going on in the world, but as a team, we all got to be one,” the second-year player said.

The social injustice issue hung over the entire league on the opening weekend of games much like the heavy layer of smoke that enveloped the Bay Area and cast an orange hue over Levi’s Stadium and much of the western U.S. The intense smoke, generated by wildfires raging from southern California to Washington state, placed in question whether air quality would even be safe enough for the Cardinals and 49ers to play.

Play they did, but first the Cardinals joined seven other NFL teams who remained inside as the anthem played, a gesture aimed at bringing attention to the need for social equality.
Before Sunday’s game, the Cardinals kept discussions about their Week 1 social justice plan close to the vest, but said they had full support from team owner Michael Bidwill.

Veteran wide receiver Larry Fitzgerald has known Bidwill for over 16 years and said that while these issues are currently at the forefront, Bidwill has always been a strong proponent of racial equality. 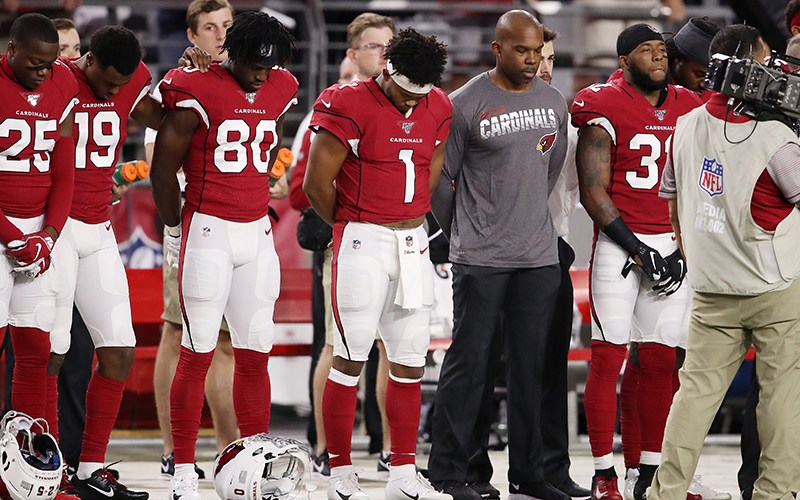 “That’s what the Bidwill family’s always been about, in terms of social justice and prison reform things,” Fitzgerald said after a practice last week. “He wants to be somebody who’s being progressive and taking the lead, and he wants his organization to do the same thing.”

In June, Bidwill and the other 31 NFL owners committed $250 million over the next decade toward combating systemic racism.

Before the season began the NFL laid out efforts to promote the Black Lives Matter movement with messaging on the back of helmets and the playing of “Lift Every Voice and Sing,” known as the Black national anthem, in tandem with the customary anthem.

Murray chose the phrase “End Racism” on his helmet, words that were also printed below the goalpost at one end of the field with “It Takes All of Us” inscribed on the opposite goalpost.
Once the game began, however, it was football as usual. The Cardinals rallied from a 10-0 deficit to upset the defending NFC champions, 24-20.

While the NFL’s efforts didn’t overshadow the product on the field, NFL Commissioner Roger Goodelll has acknowledged that he regrets not giving more attention to social injustice protests launched in 2016 by former 49ers quarterback Colin Kaepernick, who has not played in the league since that season.

Wide receiver Deandre Hopkins wore a Kaepernick jersey on the trip to San Francisco and also at his post-game press conference in his Cardinals debut.

When asked about the jersey by reporters, Hopkins pulled at the all-black fabric and lettering, showing it off and waving it around.

The league may have recently taken a firm stance on race, but Hopkins said activism isn’t new for him. Hopkins, who caught 14 passes in his Cardinals debut, said he’s happy to have a platform to speak for family or friends who have been incarcerated, but he’s very familiar with the issue, citing his ancestry in South Carolina.

“Four-hundred years of slavery, so it’s going to take a long time before everything comes back to where it should be,” Hopkins said.