WASHINGTON – In the hours after the 9/11 attacks, lawmakers from both parties gathered on the steps of the Capitol and began singing “God Bless America” in a spontaneous moment of solidarity that briefly offered hope in a national crisis.

That was then. This is now.

Experts and tourists alike said Friday they found it hard to imagine such a scene repeating itself today, when the country is deeply divided and “fractured.”

“In the last few years, I’ve said frequently that if we had the same thing happen today, we wouldn’t have 535 members on the steps of the Capitol, we would have 250 of them back in their offices writing impeachment resolutions,” said Norman Ornstein, resident scholar at the American Enterprise Institute.

He was not alone. Interviews Friday with visitors to the National Mall and political analysts produced largely the same response: What happened on Sept. 11, 2001, was great, but it was likely a one-time thing.

“Happen right now?” asked Stefano Bertone, before he sighed as he walked on the Mall. “I guess the Congress now is very polarized and politics in general in the country are very polarized, but these things come and go.”

The Washington resident was born in Italy and remembers watching footage of the attacks in 2001.

“I was in Italy when this happened and I had been in the U.S. and in New York a couple weeks earlier and we were shocked,” he said. “I mean everything stopped, all the TVs, TV channels showed what was happening.”

Ruben Delgado, a visitor from Rhode Island, said that in a moment of tragedy, it was important for people to put aside their differences.

“You see how … a bunch of, like, people that probably don’t necessarily agree with each other, just uniting in a moment of tragedy,” Delgado said, after watching video of Congress singing on the Capitol steps in 2001.

But that’s all it was, a moment, said John Hudak, a senior fellow at the Brookings Institution. He said the harmony in that moment was more of a “Band-Aid” covering the deep divides and differences that remained between the parties.

As evidence that the parties are not likely to come together as they did 19 years ago, Jason Mollica points to how lawmakers have responded to the COVID-19 pandemic. 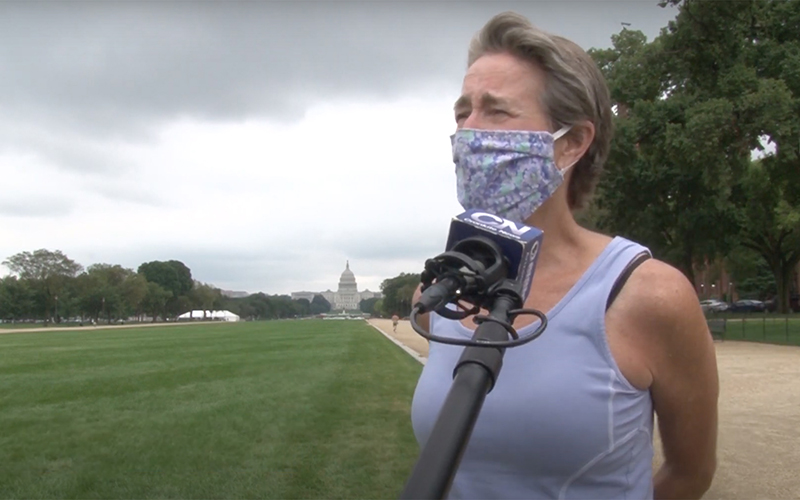 Anne Parshall said she loves visiting Washington but that the town’s bitter partisan fighting has left her feeling “like a black mark has been hashed across this city.” (Photo by Mythili Gubbi/Cronkite News)

“This should have been the event that everyone came together and said we need to come together,” because it has affected more people’s lives up-close, said Mollica, a professor of communications at American University.

Instead, he said, policies surrounding the pandemic have served to deepen partisan divides.

Ornstein agreed that the tribalization of policy and politics can be seen in the COVID-19 crisis, pointing to a rally this week for President Donald Trump where a limited number of supporters wore masks.

“You have people who refuse to wear masks, some of those interviewed yesterday at that rally, because wearing a mask means you’re giving aid and comfort to the enemy, ‘those liberal Democrats,'” Ornstein said.

Some visitors noted that partisanship is, and was, great, but it was overwhelmed by the magnitude of 9/11.

Not everyone was pessimistic. Sen. Kyrsten Sinema, D-Arizona, and Rep. Tom O’Halleran, D-Sedona, pride themselves on their bipartisan credentials, and both said Friday that working “across the aisle” remains extremely important.

Sinema said in a prepared statement that Sept. 11 “serves as a reminder that more unites us as Americans than divides us – and that our politics should reflect that.” O’Halleran said the nation should be “of one mind” when it comes to remembering the victims of 9/11, which can also make it “easier to look past the divisions we’re seeing not only in Washington, but across our great country.”

“Despite the negativity and partisan bickering we’ve all seen this year, bipartisan work continues among those who make the effort to reach across the aisle,” he said in a written statement.

But Mall visitor Anne Parshall does not expect to see Congress uniting anytime soon. The Baltimore resident said she feels the country is “fractured” and that the problem is deep-seated in Washington.

“I love this city. This is a beautiful city architecturally, culturally, it’s got a lot going on,” she said while walking on the Mall Friday. “But I feel like a black mark has been hashed across this city because of what’s going on in the White House and it’s very, very sad. It may take years to get rid of that.”