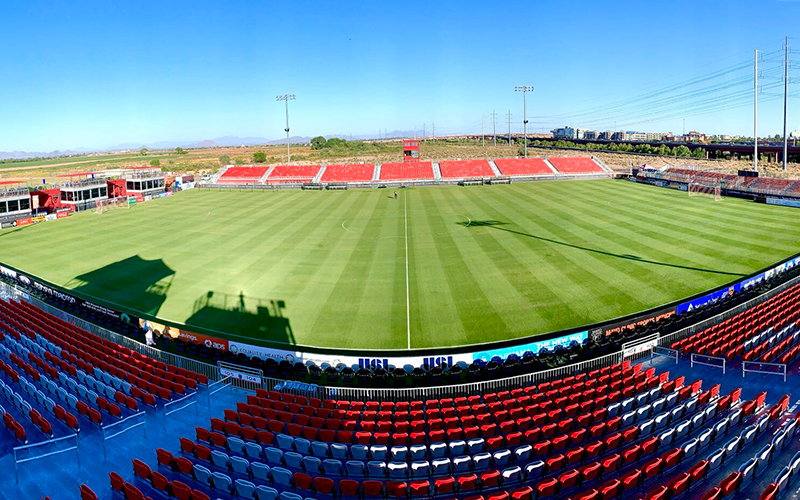 The Rising announced that the club will start allowing a limited number of fans – about 1,000 season-ticket holders – to attend home matches at Casino Arizona Field in south Scottsdale, starting with Friday’s game versus Las Vegas Lights FC at 7:30 p.m.

The stadium has a capacity of 6,200, which means that only about one out of every six seats will be occupied.

“The health and safety of our players, staff, fans and community remains our top priority,” general manager Bobby Dulle said.

The Rising will implement “several key safety protocols” stemming from consultations with “state and local officials as well as health specialists,” Dulle said.

The club also has “obtained safety certification by HealthyVerify, a private company that specializes in the implementation of disease-reducing procedures,” according to a statement released Friday.

In addition to distancing and masking requirements, the Rising have implemented a no-bag policy and will require fans to consume all food and beverage in their preassigned seats. The organization also will carefully orchestrate parking, entrance to and exit from the stadium to minimize person-to-person contact. 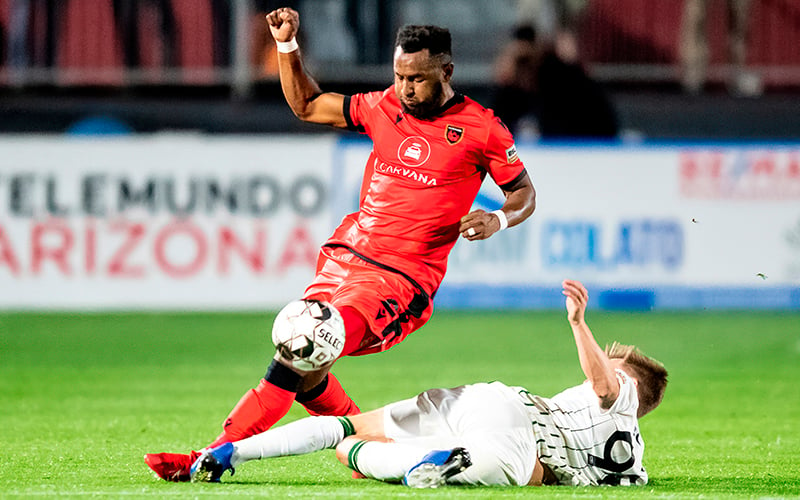 Rising coach Rick Schantz received the news of fans returning on Friday morning, along with encouragement from team owner Tim Riester to use the information as a tool to motivate his players ahead of last Saturday’s match against Lights FC in Las Vegas.

The Rising won that match 2-0 thanks to goals from Junior Flemmings and Rufat Dadashov.

“Being the first pro club to have fans (following the shutdown) is something to be proud of,” Schantz said. “Our players really love the fans. They love the interaction with the fans, and the engagement – as do I.”

Rising management scheduled a Zoom call for all fans with tickets to Friday’s game to address any questions and concerns they may have about attending the match.

The news spread rapidly Friday afternoon, with players and fans taking to social media to share their excitement.

“Obviously as athletes we love love playing in front of fans because they add so much to the game experience and are huge in getting a result day in and day out,” Rising goalkeeper Eric Dick said in a text. “This season has been weird because we haven’t been able to play first hand in front of our amazing family out there, and so the fact that we can safely get any number of fans into Casino will just be a huge moment for us as players, them as fans and all of us as a Phoenix Rising family.

“We’ve appreciated everything they’ve done away from the field, showing us support via the Zoom watch parties and other methods, but now we get to return to the real deal! I know they’ve been resting their voices for seven-plus months – can’t wait to hear Casino go off Friday night!”

Phoenix Rising FC superfan Monica McPherson, an original member of the Rising supporters group The Red Fury, said that her excitement level registered “10 out of a possible 10.”

Phoenix Rising has not played a home game in front of fans since its March 7 season opener, a convincing 6-1 victory over Portland Timbers 2 FC.

The Rising is coming off a difficult stretch of four consecutive away games, and will now close out the abbreviated 2020 regular season playing four of their five remaining games at home.

The home-field advantage in those remaining games – which will no doubt be amplified with 1,000 fans in the stands – could play a major role in determining whether Phoenix finishes the regular season atop Group B.

The second and third place teams in Group B – LA Galaxy II and Orange County SC – sit just five points adrift of the Rising in the standings, and LA and OC both have a game in hand over Phoenix.

The top two teams in the group will advance to the USL Championship playoffs, scheduled to start in early October.

For Phoenix Rising fans not lucky enough to get tickets for Friday’s match, the game will air live – nationally on ESPN+, locally on CW61 and on the ABC15 mobile app.