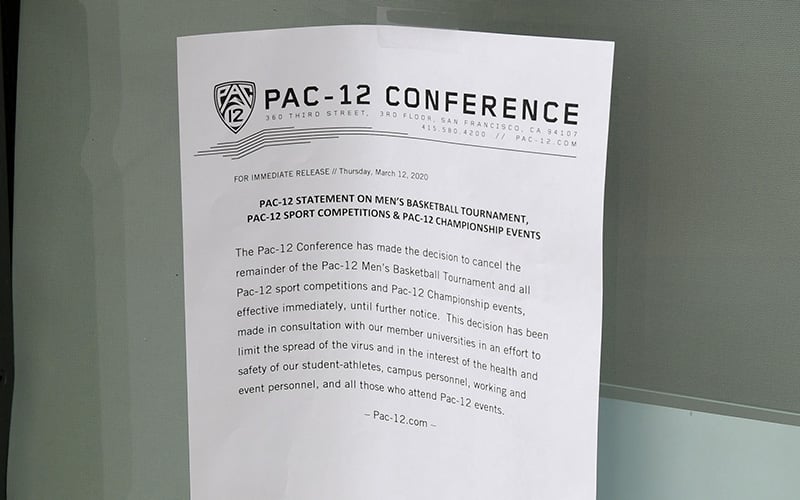 The Pac-12 sports season that ended in March because of the novel coronavirus pandemic could resume sooner than expected after the conference announced Thursday that it will be able to implement daily testing for its athletes. (Photo by Ethan Miller/Getty Images)

In August, fans were told Pac-12 athletics would have to wait until the spring of 2021 to resume.

On Thursday, a decision was made that could change that.

“This agreement is a major step in the safe return of sports competition in the Pac-12,” commissioner Larry Scott said.

The conference’s partnership with Quidel Corporation, a diagnostic healthcare product manufacturer, will lead to daily Covid-19 testing across all Pac-12 athletic departments by the end of September.

Although the Pac-12 offered no timetable for the return of football or basketball, Scott said a return before the end of 2020 was still possible.

Before that can happen, however, state governments in Oregon and California will need to roll back some of the health ordinances in place preventing the teams there from playing.

“Some of this is still outside of our control,” Scott said.

Quidel CEO Doug Bryant said the machines may eventually be implemented outside the Pac-12.

“Within the last month, we have doubled our shipping capacity,” Bryant said. “As we continue to ramp up production, we will have the ability to help other conferences if asked.”

Dr. Doug Aukerman of Oregon State, head of the conference’s medical advisory committee, said having daily testing gives the Pac-12 confidence that no infected player will step on a field or court.

“We felt like it was critical we have consistent point-of-care access to be able to move forward with contact athletes in a safe manner,” Aukerman said. “Having the opportunity and ability to identify and immediately remove someone who has the potential to be infected prior to stepping on the practice field really reduces the risk and removes the gap that currently exists with traditional laboratory testing.”

Regardless of when play begins, Scott said the Pac-12 is going to do it safely.

“We’ve gone about return to play in a measured and thoughtful way,” Scott said. “We’re going to let the data and the science drive us. We’re going to have a high degree of confidence that by return to contact and returning to play we’re not encouraging the spread.”